Colossus in other media

Colossus in other media

This is a list of media appearances of Colossus.

Spider-Man and His Amazing Friends

Colossus made his television début in two episodes of the animated series Spider-Man and His Amazing Friends. He appeared in the episodes 3.3, "The Education of a Superhero" and 3.7, "The X-Men Adventure". Speaking only in his second appearance, he was voiced by John Stephenson.

Pryde of the X-Men

Colossus's next appearance was in 1989 in the 30 minute animated one-shot X-Men: Pryde of the X-Men voiced by Dan Gilvezan.

In the 1992 animated television series X-Men, the voice of Colossus was provided by Rick Bennett in episode 1.8, "The Unstoppable Juggernaut" and by Robert Cait in episode 2.4, "Red Dawn". He made a few other silent cameos in a couple of episodes throughout the rest of the series, (usually in reference to alternate futures or time travel related episodes.) 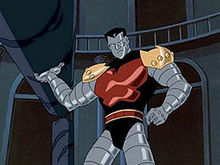 In the 2000 animated television series X-Men: Evolution, the voice of the 21 year old[citation needed] Colossus was provided by James Horan (actor). This Colossus is one of Magneto's Acolytes, but is an unwilling accomplice; Magneto is heard at least once to threaten him with the possibility that his family will be killed if Colossus does not obey him (once when Colossus encountered Wolverine and another when gaining info on Apocalypse). After Magneto's apparent death, Pyro told Wolverine that Colossus bailed and went back to Russia when asked where the other Acolytes are. He would also arrive to help in the final battle against Apocalypse. When Professor X entered the mind of Apocalypse and saw the future, he saw Colossus as one of the X-Men. He appeared in only seven episodes. Despite him saving her and aiding her in a fight, there is no evidence of an attraction between him and Shadowcat other than a few brief scenes in one episode.

Wolverine and the X-Men

Colossus appears in Wolverine and the X-Men voiced by Phil Morris. He makes a cameo in the first episode, although it is just a retrospective of the past. He was training in the Danger Room with Shadowcat and Nightcrawler, until Wolverine comes up to say "goodbye" when they end up trapped on a big magnet. It is later mentioned in episode 2 that he is staying in Russia with his family and refuses to rejoin the X-Men when Beast asks him to. The reason was that he didn't want to leave his family in danger. He only made one more appearance in season one, but it was Mystique taking his guise. Original promo shots for the series depicted Colossus as one of the main X-Men in the series' new roster,[citation needed] however Colossus does not return to the team once it reforms. He was supposed to reappear in the proposed season two where he and his sister Ilyana were to try to escape Russia during its anti-mutant hysteria.[1] Despite not being a full fledged X-Man in the series once the team gets back together, Colossus is featured as one of the Wolverine and the X-Men action figures despite his very few cameos in the series.[citation needed] Other main X-Men haven't even gotten their own action figures, notably the female members and Angel.[original research?]

Colossus made cameos in the first and sixth episodes of The Super Hero Squad Show voiced by Tom Kenny.[2]

Colossus appears in the Robot Chicken episode "Sausage Fest". He is among the featured X-Men that were killed in battle against a Sentinel.

Colossus also appears in the third installment of the internet viral video series "The Juggernaut Bitch: Shadow of the Colossi".

In X-Men, Colossus has a brief cameo as a student sketching in the Xavier Institute's courtyard. 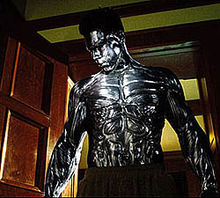 Daniel Cudmore as Colossus in X2.

In the 2003 film X2, Colossus is played by Daniel Cudmore. After the school is attacked, he rescues Siryn and leads the younger students to safety. He offers to stay and fight with Wolverine, but Wolverine tells him to take care of the students. He does not have his Russian accent and has only a few lines in this film.

Cudmore reprises the role in the 2006 film X-Men: The Last Stand. His name was changed to Peter Rasputin (although in the official site his whole name is his original name, with "Peter" as a nickname, hence, Piotr "Peter" Rasputin). In the Danger Room, he throws Wolverine up in the air (a Fastball Special), who then takes down a Sentinel. Earlier in the Danger Room scene, it is shown that this movie version of Colossus is not immune to Rogue's absorption powers when he willingly allows her to copy his metal skin ability. He also joins the battle with the other X-Men against Magneto on Alcatraz Island. Like in the Danger Room, he throws Wolverine at Magneto, which is a distraction so that Beast can inject Magneto with the cure. Despite being in promotional art for the film, and being in the film much longer than the other two appearances, Colossus only has one line in the entire film (Bobby Drake asks what happened to Rogue; he merely replies, "Yeah, she took off.")

Bleedingcool.com reported that Colossus will be in the X-Men spin-off Deadpool, saying that he will be in more than one scene.[3]

In the novelization of the film X-Men: The Last Stand, Colossus and Shadowcat apparently had a brief relationship but broke up with Colossus still having feelings for the latter.

The X-Men/Star Trek crossover novel Planet X has the X-Men transported into the Star Trek universe; Colossus is seen transforming into his metal form and is mistaken for a Founder by Starfleet personnel.