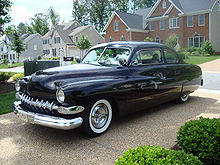 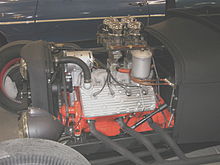 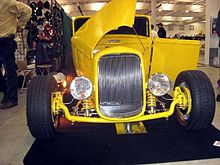 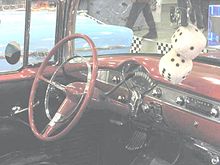 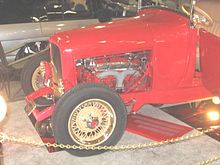 '28 A roadster with Kelsey-Hayes wire wheels.

A custom car is a passenger vehicle that has been modified in either of the following two ways. First, a custom car may be altered to improve its performance, often by altering or replacing the engine and transmission. Second, a custom car may be a personal "styling" statement, making the car look unlike any car as delivered from the factory. Although the two are related, custom cars are distinct from hot rods. The extent of this difference has been the subject of debate among customizers and rodders for decades. Additionally, a street rod can be considered a custom.

A development of hot rodding, the change in name corresponded to the change in the design of the cars being modified. The first hot rods were pre-World War II cars, with running boards and simple fenders over the wheels. Early model cars (1929 to 1934) were modified by removing the running boards and either removing the fenders entirely or replacing them with very light "cycle fenders". Later models usually had "fender skirts" installed on the rear fenders. Many cars were "hopped up" with engine modifications such as adding additional carburetors, high compression heads and dual exhausts. "Engine swaps" were done, the object of which was to put the most powerful engine in the lightest possible frame and body combination. The suspension was usually altered. Initially this involved lowering the rear end as much as possible with the use of "lowering blocks" on the rear springs. Later cars were given a "rake job" either adding a "dropped" front axle or heating front coil springs to make the front end of the car much lower than the rear. Much later some hot rods and custom cars swapped the old solid rear axle for an independent rear axle, often from Jaguar. Only rarely was the grille of one make of car replaced by another; one exception was the 1937 Buick grille, often used on a Ford. (In the 1950s and 1960s, the grille swap of choice was the 1953 De Soto.) The original hot rods were plainly painted like the Model A Fords from which they had been built up, and only slowly begun to take on colors, and eventually fancy orange-yellow flamed hoods or "candy-like" deep acrylic finishes in the various colors.

With the change in automobile design to encase the wheels in fenders and to extend the hood to the full width of the car, the former practices were no longer possible. In addition, there was tremendous automotive advertising and subsequent public interest in the new models in the 1950s. Hence custom cars came into existence, swapping headlamp rings, grilles, bumpers, chrome side strips, and tail lights, as well as "frenching" and "tunnelling" head- and taillights. The bodies of the cars were changed by cutting through the sheet metal, removing bits to make the car lower, welding it back together, and adding a lot of lead to make the resulting form smooth (hence the term "lead sled"; lead has been replaced by Bondo). By this means, "chopping" made the roof lower;[1] "sectioning"[2] made the body thinner from top to bottom. "Channeling"[3] was cutting notches in the floorpan where the body touches the frame to lower the whole body. Fins were often added from other cars, or made up from sheet steel. In the custom car culture, someone who merely changed the appearance without also substantially improving the performance was looked down upon.

Custom cars are distinct from cars in stock condition. Builders may adopt the visual and performance characteristics of some relevant modification styles, and combine these as desired. There are now several different custom themes, including:

Paint was an important concern. Once bodywork was done, the cars were painted unusual colors. Transparent but wildly-colored candy-apple paint, applied atop a metallic undercoat, and metalflake paint, with aluminum glitter within candy-apple paint, appeared in the 1960s. These took many coats to produce a brilliant effect — which in hot climates had a tendency to flake off. This process and style of paint job was invented by Joe Bailon, a customizer from Northern California.

Customizers also continued the habit of adding decorative paint after the main coat was finished, of flames extending rearward from the front wheels, scallops, and hand-painted pinstripes of a contrasting color. The base color, most often a single coat, would be expected to be of a simpler paint. Flame jobs later spread to the hood, encompassing the entire front end, and have progressed from traditional reds and yellows to blues and greens and body-color "ghost" flames. One particular style of flames, called "crab claw flames", which is still prevalent today, is attributed to Dean Jeffries.[4]

Painting has become such a part of the custom car scene that now in many custom car competitions, awards for custom paint are as highly sought after as awards for the cars themselves.

Engine swaps have always been commonplace. Once, the flathead, or "flatty", was the preference, supplanted by the early hemi in the 1950s and 1960s. By the 1970s, the small-block Chevy was the most common option, and since the 1980s, the 350 cu in (5.7 l) Chevy has been almost ubiquitous.[5] The flatheads and early hemis have not entirely disappeared, but ready availability, ease of maintenance, and low cost of parts makes the SB Chevy the most frequent engine of choice.

With the coming of the muscle car, and further to the high-performance luxury car, customization declined. One place where it persisted was the U.S. Southwest, where lowriders were built similar in concept to the earlier customs, but of post-1950s cars.

As the supply of usable antique steel bodies has dried up, companies such Westcott's,[7] Harwood, Gibbon Fiberglass[8] and Speedway Motors[8] have begun to fabricate new fiberglass copies,[9] while Classic Manufacturing and Supply, for one example, has been making a variety of new steel bodies since the 1970s.[10] California's "junker" (or "crusher") law, which pays a nominal sum to take "gross polluters" off the road, has been criticized by enthusiasts (and by SEMA) for accelerating this trend.[11]

Starting in the 1950s, it became popular among customizers to display their vehicles at drive-in restaurants. Among the largest and longest lasting was Johnie's Broiler in Downey, California. The practice continues today, especially in Southern California.

Examples of notable customizers include George Barris, Bill Cushenberry, the Alexander Brothers, the "legendary" Gil Ayala,[12] Darryl Starbird,[13] Roy Brizio, Troy Trepanier (of Rad Rides by Troy), Boyd Coddington, Harry Westergaard,[14] Dave Stuckey,[15] Dean Jeffries, "Posie",[16] Ron Clark and Bob Kaiser (of Clarkaiser Customs),[17] Joe Bailon[18] (inventor of candy apple paint),[19] Gene Winfield, Joe Wilhelm, "Magoo",[20] Chip Foose,[21] and Pete Chapouris. Others, such as Von Dutch, are best known as custom painters. Several customizers have become famous beyond the automobile community, including Barris, Jeffries, and Coddington, thanks to their proximity to Hollywood; Barris designed TV's Batmobile, while Chapouris built the flamed '34 three-window coupé in the eponymous telefilm "The California Kid". Another Barris creation, Ala Kart (a '29 Ford Model A roadster pickup), made numerous appearances in film (usually in the background of diner scenes and such), after taking two AMBR wins in a row.

The highest award for customizers is the AMBR (America's Most Beautiful Roadster) trophy, presented annually at the Grand National Roadster Show since 1948 (also known within the customizer community as the Oakland Roadster Show until it was moved to Southern California in 2003). This competition has produced famous, and radical, customs.

Another is the Ridler Award, presented at the Detroit Autorama since 1964 in honor of show promoter Don Ridler. With one of the most unusual of car show entry requirements, winners of the prestigious Ridler Award are selected as the most outstanding from among cars being shown for the first time. This prompts builders of many high-end roadsters to first enter the Autorama first and then the Grand National show in order to have the chance to win top honors at both shows. Few cars and owners can claim this achievement.

Some customs gained attention for winning the AMBR trophy, or for their outlandish styling. Notable among these is Ed Roth's Hot Wheels cars, among them American Graffiti" {1973}) or television (such as The Monkeemobile, the "Munsters" hearse, or, more recently, Boyd's full-custom Tool Time '34, or Pete and Jake's '33 three-window, Eliminator, built for the ZZ Top video[24]). Specialist vehicles, such as the T/A, KITT, from Knight Rider, are not usually considered customs, but movie or TV cars, because they retain a mostly stock exterior.

Still others exemplified a trend. One of these is the '51 Merc built by the Barris brothers for Bob Hirohata in 1953, known forever after as the Hirohata Merc. Even without an appearance in film ("Runnin' Wild"), it is iconic of '50s customs, and of how to do a Merc right.[25] The same year, Neil Emory and Clayton Jensen built Olds sedan. Polynesian made the cover of Hot Rod in August, and saw 54 pages of construction details in Motor Trend Custom Car Annual in 1954.[26]

Certain linguistic conventions are followed among rodders and customizers:

The "cutoff year" as originally promoted by the National Street Rod Association (NSRA) is 1949. Many custom car shows will only accept 1948 and earlier models as entries, and many custom car organizations will not admit later model cars or trucks, but this practice is subject to change. The NSRA has announced that starting in 2011 it will switch to a shifting year method where any owner with a car 30 years or older will be allowed membership. So in 2011 the owner of a 1981 model year vehicle will qualify, then in 2012 the owner of a 1982 model year vehicle will quality, and so on. Additionally, the Goodguys car show organization has moved the year limit for its "rod" shows from 1949 to 1954 in recent years.

Some terms have an additional, different meaning among hot rodders than among customizers: NOS, for instance, is a reference to nitrous oxide, rather than new old stock.