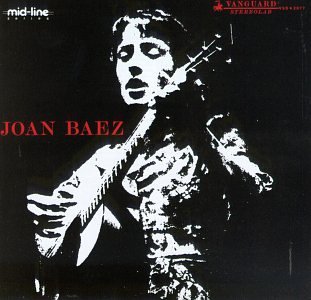 "Joan Baez" was singer ' 1960 self-titled debut album. The album featured thirteen traditional folk songs, including definitive readings of "All My Trials", "Silver Dagger", and "Fare Thee Well". Though Baez was reportedly offered a contract with Columbia at the time, she chose to go instead with the independent Vanguard label, hoping for increased artistic license, and her instinct seemed to have paid off. Most of the songs featured only Baez' vocals and intricate guitar work, with a second guitar added to a handful of songs. Despite the lack of strings and horns, backup singers and catchy singles, the album went gold and raised Joan Baez to superstar status.

"...It took four days. We recorded it in the ballroom of some hotel in New York, way up by the river. We could use the room every day except Tuesday, because they played Bingo there on Tuesdays. It was just me on this filthy rug. There were two microphones, one for the voice and one for the guitar. I just did my set. It was probably all I knew how to do at that point. I did '' once and that was it...That's the way we made 'em in the old days. As long as a dog didn't run through the room or something, you had it..."

In 2001, Vanguard reissued "Joan Baez" with new liner notes and three previously unreleased songs. (Between 2001 and 2005, they reissued remastered versions of Baez' thirteen original albums with the label.)