State Route 68 (SR 68) is a state highway that runs from Pacific Grove to Salinas in Monterey County. It is about 20 miles (32 km) long.

This route is part of the California Freeway and Expressway System[2] and is eligible for the State Scenic Highway System.[3] However, only the part from SR 1 to the Salinas River is designated by Caltrans as a scenic highway.[4] The Monterey-Salinas Highway is a California Scenic Route because of its views of the chaparral and springtime lupin for 14 miles (23 km) between State Route 1 in Monterey to the Salinas River.[citation needed] State Route 68 is part of the Juan De Anza Trail.[5] 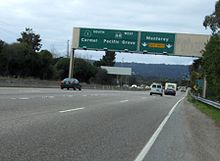 Highway 68 is part of the DeAnza Trail, a route that linked all of California's mission settlements during the Spanish colonial period. With the advent of the automobile, Highway 68 was upgraded from a dirt wagon road to a 2-lane paved road in 1937.[6]

During the 1950s and 1960s, Caltrans had planned to upgrade Highway 68 to a freeway between Salinas and Highway 1 in Monterey, that was to start at US 101 south of the city and proceed west between Salinas and Spreckels, serving as a bypass for Salinas. The freeway was to then follow the existing Highway 68 alignment into Monterey.

The freeway plan died as a result of environmental concerns along the route. The only portions of this freeway that were actually built were a 1-mile (1.6 km) section approaching the Highway 1 interchange in Monterey, and a 3-mile (4.8 km) segment starting in Spreckels and heading west, bypassing the unincorporated village of Toro Park. The segment around Spreckels opened in 1967 and included a pair of new bridges spanning the Salinas River, which replaced an old truss bridge built in 1889. At the western terminus of the Spreckels freeway segment, land acquired for the freeway can still be seen.[7]

There continues to be discussions, but no definitive plans, to either bypass Route 68 or convert the existing road to 4-lanes by building a second roadway alongside the present 2-lane carriageway. Caltrans and Monterey County officials mention the most practical route for a bypass would be to the north of the existing Route 68, through Fort Ord. A major upgrade of the Highway 68 corridor would cost on the order of $300 million. In the fall of 2007, Caltrans is scheduled to begin a $6 million project to implement safety upgrades at three major intersections along Highway 68.

Meanwhile, Caltrans and Monterey County are proceeding with a plan to divert Monterey-Salinas traffic away from Highway 68 by converting Davis Road and Reservation Road from two lanes to four between Highway 101 on the north side of Salinas and Highway 1 in Marina. These two roads pass through Fort Ord and the upgrades are using excess land set aside following the base's closure in 1994. The Davis Road/Reservation Road upgrade is a short-term fix, and most state and county officials realize that a permanent fix for Highway 68 will eventually be necessary.

Note: Except where prefixed with a letter, postmiles were measured in 1964, based on the alignment as it existed at that time, and do not necessarily reflect current mileage.

The entire route is in Monterey County.