The kora is a 21-string bridge-harp used extensively in West Africa.[1]

A kora is built from a large calabash cut in half and covered with cow skin to make a resonator, and has a notched bridge. It does not fit well into any one category of western instruments and would have to be described as a double bridge harp lute. The sound of a kora resembles that of a harp, though when played in the traditional style, it bears a closer resemblance to flamenco and delta blues guitar techniques. The player uses only the thumb and index finger of both hands to pluck the strings in polyrhythmic patterns (using the remaining fingers to secure the instrument by holding the hand posts on either side of the strings). Ostinato riffs ("Kumbengo") and improvised solo runs ("Birimintingo") are played at the same time by skilled players.

Kora players have traditionally come from griot families (also from the Mandinka nationalities) who are traditional historians, genealogists and storytellers who pass their skills on to their descendants. The instrument is played in Guinea, Guinea Bissau, Mali, Senegal, Burkina Faso and The Gambia. A traditional kora player is called a Jali, similar to a 'bard' or oral historian. Most West African musicians prefer the term 'jali' to 'griot', which is the French word.

Traditional koras feature 21 strings, eleven played by the left hand and ten by the right. Modern koras made in the Casamance region of southern Senegal sometimes feature additional bass strings, adding up to four strings to the traditional 21. Strings were traditionally made from thin strips of hide, for example antelope skin - now most strings are made from harp strings or nylon fishing line, sometimes plaited together to create thicker strings.

By moving leather tuning rings up and down the neck, a kora player can retune the instrument into one of four seven-note scales. These scales are close in tuning to western Major, Minor and Lydian modes.[2][3]

Djeli Madi Wuleng is traditionally linked to the origins of the kora in the early 19th century. However, the earliest European reference to the kora in Western literature is in Travels in Interior Districts of Africa (1799) by the Scottish explorer Mungo Park. The most likely scenario, based on Mandinka oral tradition, suggests that the origins of the Kora may ultimately be linked with Jali Mady Fouling Cissoko, some time after the founding of Kaabu in the 16th century.[4]

Nowadays, increasingly koras are made with guitar machine heads instead of the traditional leather rings. The advantage is that they are much easier to tune. The disadvantage is that it limits the pitch of the instrument as the string lengths are more fixed and lighter strings are needed to lift it much more than a tone. Learning to tune a traditional kora is arguably as difficult as learning to play it and many people entranced by the sound while in Africa, buy a kora and then find themselves unable to keep it in tune once they are home, relegating it to the status of ornament. Koras can be converted to replace the leather rings with machine heads. Wooden pegs and harp pegs are also used but both can still cause tuning problems in damper climates unless made with great skill.

In the late 20th century, a 25-string model of the kora was developed, though it has been adopted by only a few players, primarily in the region of Casamance, in southern Senegal. Some kora players such as Seckou Keita have double necked koras, allowing them to switch from one tuning to another within seconds, and giving them increased flexibility.

The French Benedictine monks of the Keur Moussa Abbey (Senegal), who possibly were the first to introduce guitar machine heads instead of leather rings in the late seventies, conceived a method based on scores to teach the instrument. Brother Dominique Catta, choirmaster of the Keur Moussa Abbey,[5] was the first Western composer who wrote for the kora (solo pieces as well as duets with Western instruments).[6]

An electric instrument modeled on the kora (but made primarily of metal) called the gravikord was invented in the late 20th century by instrument builder and musician Robert Grawi. It has 24 strings but is tuned and played differently than the kora. Another instrument the Gravi-kora, a 21 string electro-acoustic instrument, was later developed by Robert Grawi especially for kora players who wanted a modern instrument. Its playing and tuning are the same as the traditional kora.[7] The gravi-kora has been adopted by kora players such as Daniel Berkman,[8] Jacques Burtin, Le Chant de la Forêt (The Song of the Forest), suite for kora, gravi-kora, flute and viola, [9] and Foday Musa Suso, who featured it in recordings with jazz innovator Herbie Hancock,[10] with his band Mandingo, and on Suso's New World Power album.[11]

Kora sheet music (fragment of the score of One Thousand Sources, for solo kora, by Jacques Burtin).

The kora music being part of the oral tradition, its music was not written until the 20th century. The ethnomusicologists were the only ones to note some traditional airs in the normal grand staff method using the G clef and the F clef.

While griots still compose in the traditional way (without writing scores), some Western musicians began to write partitures for the kora and adopted the Keur Moussa notation system at the beginning of the 1980s. More than 200 scores have already been written for kora solo or kora and Western instruments. Two notable Western composers for the kora are Brother Dominique Catta[12] and Jacques Burtin[13] (France), who wrote most of these scores, though composers like Carole Ouellet[14] (Canada), Brother Grégoire Philippe[15] (Monastère de Keur Moussa) and Sister Claire Marie Ledoux[16] (France) contributed with original works. 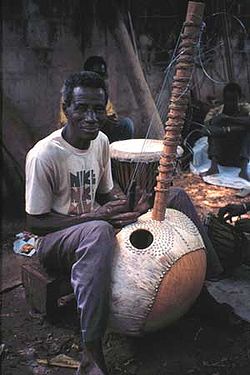