Flamenco
Not to be confused with Flamengo or Flamingo.
For films with the same name, see Flamenco (film).

The cante (singing), toque (guitar playing), dance and palmas (handclaps) are the principal facets of flamenco.

In recent years flamenco has become popular all over the world and is taught in many countries - in Japan flamenco is so popular there are more academies there than in Spain.[2][3] On November 16, 2010, UNESCO declared Flamenco one of the Masterpieces of the Oral and Intangible Heritage of Humanity.[4]

George Borrow asserted the word flemenc [sic] is synonymous with "gypsy".[citation needed] Blas Infante, in his book Orígenes de lo flamenco y secreto del cante jondo, suggests the word may derive from Andalusian Arabic fellah mengu, "Escapee Peasant", referring to the Muslim Andalusians (Moriscos) who decided to stay and mix with the Romani newcomers when the lands they had seized were reclaimed by the Spanish.

Other hypotheses include "Fleming, native of Flanders" (Du. Vlaming). Spain ruled Flanders for many years, and King Carlos I[disambiguation needed

] brought with him to Madrid an entire Flemish court.[citation needed] It is recorded that during the Habsburgs Empire starting from the Reign of his father Felipe de Austria, who was known to have Andalusian musicians at his Court brought by his Spanish wife, and continuing through it, the Spanish troops that were used by the Habsburgs in their Netherlands domains were accompanied and entertained by musicians that played the popular sounds they were nostalgic from back home, and on their return to Spain and other parts these became known to other Europeans, included the Spaniards and players of more sober traditional Andalusian music as 'Flamenco', the flemish style.

"Flama"[5] in Spanish means flame or fire, and "enco" or "endo", is a suffix which means a quality-of, or having a-similarity-to, or pertaining-to.[6] So, it is suggested the word originated from flame and fire in order to convey the deep, flaming, passion expressed in Flamenco music, song and dance.

From its roots in eighteenth century popular theatre, most flamenco performers were professionals. Originally they learned from other performers much in the manner of an apprenticeship. Some artists were and are still self-taught but it was then, as now, more usual for dancers and guitarists and singers to be trained. Today, most guitarists undergo rigorous professional training and often can read and play music in other styles like classical guitar or jazz and many dancers take courses in ballet and contemporary dance as well as flamenco.

Flamenco occurs in four settings - the juerga, in small-scale cabaret, concert venues and in the theatre.

The juerga is an informal, spontaneous gitano gathering (rather like a jazz "jam session"). This can include dancing, singing, palmas (hand clapping), or simply pounding in rhythm on an old orange crate or a table. Flamenco, in this context, is organic and dynamic: it adapts to the local talent, instrumentation, and mood of the audience. This context invites comparison with that other creation of a dispossessed class, the blues. The Gypsy Blues, or even the European Blues as a means of providing a frame of reference to those new to the genre.

One tradition remains firmly in place: the cantaores (singers) are the heart and soul of the performance. A Peña Flamenca is a meeting place or grouping of Flamenco musicians or artists. There are also "tablaos", establishments that developed during the 1960s throughout Spain replacing the "café cantante". The tablaos may have their own company of performers for each show. Many internationally renowned artists have started their careers in "tablaos flamencos", like the famous singer Miguel Poveda who began in El Cordobés, Barcelona.

The professional concert is more formal. A traditional singing performance has only a singer and one guitar, while a dance concert usually includes two or three guitars, one or more singers (singing in turns, as flamenco cantaors sing solo), and one or more dancers. One of the singers may play the cajon if there is no dedicated cajon player, and all performers will play palmas even if there are dedicated palmeros. The so-called Nuevo Flamenco New flamenco may include flutes or saxophones, piano or other keyboards, or even the bass guitar and the electric guitar. Camarón de la Isla was one artist who popularized this style.

Finally, just as with its precursors, there is the theatrical presentation of flamenco. However, it is now an extended and sophisticated performance in its own right, comparable to a performance of ballet 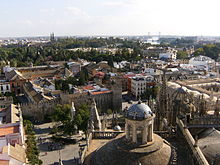 Flamenco music styles are called palos. Songs are classified into palos based on criteria such as basic rhythmic pattern, mode, chord progression, form of the stanza, and geographic origin. There are over 50 different palos flamenco, although some are rarely performed. For a complete explanation, see the main Wikipedia entry on Palo (flamenco).

There are traditions associated with each palo. Some of the forms are sung unaccompanied, while others usually have guitar or other accompaniment. Some forms are danced while others are not. Some are the reserve of men and others of women, while some may be performed by either. Many of these traditional distinctions are breaking down; for example, the Farruca is now commonly performed by women too.

Palos are traditionally classified into three groups. The most serious forms are known as cante jondo (or cante grande), while lighter, frivolous forms are called cante chico. Other considerations factor into classification, such as whether the palo is considered to be of gypsy origin or not. Forms which do not fit either category are classified as cante intermedio.

Whereas in modern Western music it is only the major and minor scales which are commonly used by composers, flamenco also uses Phrygian mode (modo dórico in Spanish).

The Phrygian mode occurs in palos such as soleá, most bulerías, siguiriyas, tangos and tientos. The harmonic version of the scale requires the 3rd degree of the scale to be sharpened: For instance, if the scale is E Phrygian the tonic chord will contain G#.

Based on the Phrygian scale, a typical cadence is formed, usually called “Andalusian cadence”. The chords in E Phrygian are Am–G–F–E. According to Manolo Sanlúcar, in this mode, E is the tonic, F would take the harmonic function of dominant, while Am and G assume the functions of subdominant and mediant respectively.[7]

When playing using the Phrygian mode, guitarists traditionally use only two basic positions for the tonic chord (music): E and A. However, they often transpose these basic tones by using a capo. Modern guitarists such as Ramón Montoya, have introduced other positions. Montoya himself started to use other chords for the tonic in the doric sections of several palos: F sharp for tarantas, B for granaína, A flat for the minera, and he also created a new palo as solo piece for the guitar, the rondeña, in C sharp with scordatura. Later guitarists have further extended the repertoire of tonalities, chord positions and scordatura.[8]

There are also palos in major mode, e.g. most cantiñas and alegrías, guajiras, some bulerías and tonás, and the cabales (a major type of siguiriyas). The minor mode is restricted to the Farruca, the milongas (among cantes de ida y vuelta), and some styles of tangos, bulerías, etc. In general, traditional palos in major and minor mode are limited harmonically to the typical two-chord (tonic–dominant) or three-chord structure (tonic–subdominant–dominant) (Rossy 1998:92). However, modern guitarists have increased the traditional harmony by introducing chord substitution, transition chords, and even modulation.

Fandangos and the palos derived from it (e.g. malagueñas, tarantas, cartageneras) are bimodal. Guitar introductions are in Phrygian mode, while the singing develops in major mode, modulating to Phrygian mode at the end of the stanza. (Rossy 1998:92)

Traditionally, flamenco guitarists did not receive any formal training. This led them to interesting harmonic findings, with unusual unresolved dissonances (Rossy 1998:88). Examples of this are the use of minor 9th chords for the tonic, the tonic chord of tarantas, or the use of the 1st 'unstopped' string as a kind of pedal tone.

Compás is the Spanish word for metre and time signature in classical music theory. It also refers to the rhythmic cycle, or layout, of a palo.

The compás is fundamental to flamenco. Without it, there is no flamenco. Compás is most often translated as rhythm but it demands far more precise interpretation than other Western styles of music. If there is no guitarist available, the compás is rendered through hand clapping (palmas) or by hitting a table with the knuckles. The guitarist uses techniques like strumming (rasgueado) or tapping the soundboard. Changes of chords emphasize the most important downbeats.

Flamenco uses three basic counts or measures: Binary, Ternary and the (unique to flamenco) twelve-beat cycle. There are also free-form styles including, among others, the tonás, saetas, malagueñas, tarantos, and some types of fandangos.

There are three types of 12-beat rhythms, which vary in their layouts, or use of accentuations: soleá, seguiriya and bulería.

The Bulerías is the emblematic palo of flamenco: today its 12 beat cycle is most often played with accents on the 3, 7, 8, 10 and 12th beats. The accompanying palmas are played in groups of 6 beats, giving rise to a multitude of counter rhythms and percussive voices within the 12 beat compás 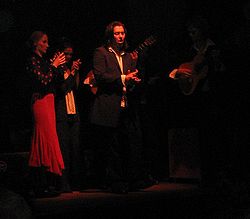 The origins, history and importance of the cante is covered in the main Wikipedia entry for the cante flamenco.

El baile flamenco is known for its emotional intensity, proud carriage, expressive use of the arms and rhythmic stamping of the feet. As with any dance form, many different styles of flamenco have developed.

In its most authentic form, flamenco can be seen danced informally at gitano (Gypsy) weddings and celebrations in Spain. There is less virtuoso technique in gitano flamenco, but the music and steps are fundamentally the same. The arms are noticeably different to classical flamenco, curving around the head and body rather than extending, often with a bent elbow.

"Flamenco puro" is considered the form of performance flamenco closest to its gitano origins. In this style, the dance is always performed solo, and is improvised rather than choreographed. Some purists frown on castanets (even though they can be seen in many early 20th century photos of flamenco dancers).

The type of dance most Europeans would call "flamenco" is a commercialized style, developed as a spectacle for tourists. To add variety, group dances are included, and even solos are more likely to be choreographed. The frilly, voluminous spotted dresses are derived from a style of dress worn for the annual Feria in Seville (the original is actually too tight to dance in!).

"Classical flamenco" is the style used in modern Spanish flamenco dance companies. It is characterized by a proud, upright carriage - for the women, the back is often held in a marked back bend. Unlike gitano flamenco, there is little movement of the hips, the body is tightly held and the arms are long, like a ballet dancer. In fact many of the dancers in these companies have trained in ballet as well as flamenco.

Modern flamenco is a highly technical dance style requiring years of study. The emphasis for both male and female performers is on lightning-fast footwork performed with absolute precision. In addition, the dancer may have to dance while using props such as castanets, shawls and fans.

"Flamenco nuevo" is the new wave in flamenco, characterized by pared-down costumes (the men often dance bare-chested, and the women in plain jersey dresses). Props such as castanets, fans and shawls are rarely, if ever, used. Dances are choreographed and include influences from other dance styles.

In traditional flamenco, young people are not considered to have the emotional maturity to adequately convey the "duende" (soul) of the genre. Therefore unlike other dance forms, where dancers turn professional early to take advantage of youth and strength, many flamenco dancers do not hit their peak until their thirties and will continue to perform into their fifties and beyond.