Mary Boykin Chesnut, born Mary Boykin Miller (March 31, 1823 – November 22, 1886), was a South Carolina author noted for a book published as her Civil War diary, a "vivid picture of a society in the throes of its life-and-death struggle."[1] She described the war from within her upper-class circles of Southern planter society, but encompassed all classes in her book. She was married to a lawyer who served as a United States senator and Confederate officer.

Chesnut worked toward a final form of her book in 1881-1884, based on her extensive diary written during the war years. It was published after her death in 1905. New versions were published after her papers were discovered, in 1949 by the novelist Ben Ames Williams, and in 1981 by the historian C. Vann Woodward. His annotated edition of the diary, Mary Chesnut's Civil War (1981), won the Pulitzer Prize for history in 1982. Literary critics have called Chesnut's diary "a work of art" and the most important work by a Confederate author. 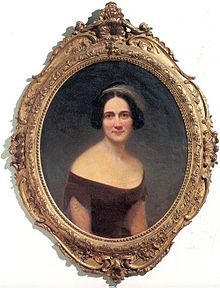 Mary Boykin Miller was born on March 31, 1823, on her maternal grandparents' plantation, called Mount Pleasant, near Stateburg, South Carolina, in the High Hills of Santee. Her parents were Mary Boykin (1804–85) and Stephen Decatur Miller (1788–1838), who had served as a U.S. Representative. In 1829 he was elected governor of South Carolina and in 1831 as a U.S. Senator. The family then lived in Charleston. Mary was the oldest of four children; she had a younger brother Stephen and two sisters: Catherine and Sarah Amelia.[1]

At age 12, Miller began her formal education in Charleston, where she boarded at Mme. Talvande's French School for Young Ladies, which attracted daughters from the elite of the planter class. Talvande was among the many French colonial refugees who had settled in Charleston from Saint-Domingue (Haiti) after its Revolution.[1] Miller became fluent in French and German, and received a strong education.[2]

Leaving politics, her father took his family to Mississippi where he bought extensive acreage. It was a crude, rough frontier compared to Charleston. He owned three cotton plantations and hundreds of slaves. Mary lived in Mississippi for short periods between school terms but was much more fond of the city.[1]

In 1836, while in Charleston, thirteen-year-old Mary Boykin Miller met her future husband, James Chesnut, Jr. (1815–85), who was eight years her senior. Her parents at first opposed his suit, but at sixteen Mary began to take an interest in the young man. At age seventeen, Miller married Chesnut on April 23, 1840.[3] They first lived with his parents and sisters at Mulberry, their plantation outside Camden, South Carolina. His father, James Chesnut, Sr. (who Mary referred to as the old Colonel), had gradually purchased and reunited the land holdings of his father John. He was said to own about five square miles at the maximum and to hold about 500 slaves by 1849.[1]

In 1858, by then an established lawyer and politician, James Chesnut, Jr. was elected a U.S. Senator from South Carolina and served as such until South Carolina's secession from the Union in 1860. Once the Civil War broke out, Chesnut became an aide to President Jefferson Davis and was commissioned a brigadier general in the Confederate Army.

Intelligent and witty, Mary Chesnut took part in her husband’s career, as entertaining was an important part of building political networks. She had her best times when they were in the capitals of Washington, DC and Richmond. She suffered from depression, in part because of her inability to have children. The Chesnuts’ marriage was at times stormy due to their differences in temperament (she was more hot-tempered and sometimes considered her husband reserved), but their companionship was mostly warm and affectionate.[1]

The Chesnuts fell onto hard times after the war. James Chesnut, Sr. died in 1866; his will left his son the use of Mulberry Plantation and Sandy Field, both of which were encumbered by debt, and eighty-three "slaves" by name, who were by then freedmen. The younger Chesnut struggled to build up the plantations and support his father's dependents.[1]

Examination of Mary Chesnut's papers has revealed the history of her development as a writer and of her work on the diary as a book. Before working to revise her diary as a book in the 1880s, Chesnut wrote a translation of French poetry, essays, and a family history. She also wrote three full novels that she never published: The Captain and the Colonel, completed about 1875; and Two Years of My Life, finished about the same time. She finished most of a draft of a third long novel, called Manassas. Elisabeth Muhlenfeld, who edited the first two novels for publication by the University of Virginia Press in 2002 and wrote a biography of Chesnut, described them as her writing "apprenticeship."[1][4]

By his father's will, James Chesnut, Jr. had the use of Mulberry and Sandy Field plantations only during his lifetime. In February 1885, both he and Mary's mother died. The plantations passed on to a male Chesnut descendant, and Mary Boykin Chesnut received almost no income for her support; she also found her husband had many debts related to the estate, which he had been unable to clear.[1] She struggled in her last year, dying in 1886 at her home, Sarsfield, in Camden, South Carolina and was buried next to her husband in Knights Hill Cemetery in Camden, South Carolina.[5]

Mary Boykin Chesnut began her diary on February 18, 1861, and ended it on June 26, 1865. She was an eyewitness to many historic events as she accompanied her husband to significant sites of the Civil War. Among them were Montgomery, Alabama and Richmond, Virginia, where the Provisional Congress of the Confederate States of America convened; Charleston, where she was among witnesses of the first shots of the Civil War; Columbia, South Carolina, where her husband served as the Chief of the Department of the Military of South Carolina and brigadier general in command of South Carolina reserve forces; and again Richmond, where her husband served as an aide to the president. At times they also lived with her parents-in-law at their house at Mulberry Plantation near Camden. While the property was relatively isolated in thousands of acres of plantation and woodland, they entertained many visitors.

Chesnut was aware of the historical importance of what she witnessed. The diary was filled with the cycle of changing fortunes of the South during the Civil War. Chesnut edited it and wrote new drafts in 1881-1884 for publication, and retained the sense of events unfolding without foreknowledge. She had the sense of the South's living through its time on a world stage. Politically aware, Chesnut analyzed and portrayed the various classes of the South through the years of the war. She portrayed southern society in detail and studied the mixed roles of men and women. She was forthright about the complex and fraught situations related to slavery, particularly the abuses of sexuality and power. For instance, Chesnut discussed the problem of white planters' fathering mixed-race children with enslaved women within their extended households.

Chesnut used her diary and notes to work toward a final version in 1881-1884. Based on her drafts, historians do not believe she was finished with her work. She created literature while keeping the sense of events unfolding; she described people in penetrating and enlivening terms and conveyed a novelistic sense of events. Chesnut captured the growing difficulties of all classes of the Confederacy as the society faced defeat at the end of the war. Literary scholars have called the Chesnut diary the most important work by a Confederate author. Edmund Wilson called it a " 'work of art'—informal department or not". He writes,

"The very rhythm of her opening pages at once puts us under the spell of a writer who is not merely jotting down her days but establishing, as a novelist does, an atmosphere, an emotional tone...Starting out with situations or relationships of which she cannot know the outcome, she takes advantage of the actual turn of events to develop them and round them out as if she were molding a novel."[1]

Because Chesnut had no children, before her death she gave her diary to her closest friend Isabella D. Martin and urged her to have it published. The diary was first published in 1905 as a heavily edited and abridged edition. Williams' version was described as more readable, but sacrificing historical reliability and many of Chesnut's literary references.[1] The version by C. Vann Woodward retained more of her original work, provides an overview of her life and society in the "Introduction", and was annotated to identify fully the large cast of characters, places and events.