Herbert is a character from the animated television series Family Guy. He is voiced by writer and voice actor Mike Henry, who created and designed the character. An elderly neighbor of the Griffin family, Herbert, who first appeared in the November 15, 2001 episode, "To Love and Die in Dixie", is a pederast who harbors an unrequited lust for Chris Griffin, though Griffin and the citizens of Quahog are either oblivious to this or indifferent because of his frailty.

Herbert's voice and appearance are inspired by an elderly man who Henry met while working at a grocery store while at high school. MacFarlane has also stated that his design was made so his creepy humor would seem funny. Herbert has received mixed reviews from critics. He has also appeared in various Family Guy merchandise and made a crossover appearance in the Family Guy spin-off, The Cleveland Show.

Herbert is an elderly neighbor of the Griffin family, a pederast who lusts for Chris Griffin. He lives in the fictional town of Quahog, Rhode Island which is modeled after Cranston, Rhode Island.[1][2][3] Herbert also does simple jobs in various episodes. In the episode "Play It Again, Brian", (season 6, 2008) Herbert is hired by Peter and Lois to babysit their children Stewie, Meg, and Chris.[4][5] While in "Believe It or Not, Joe's Walking on Air", (season 6, 2007) Herbert appears opening the "Quahog Boys Club".[6]

In the episode "Padre de Familia", (season 6, 2007) Herbert is revealed to be a war veteran as he is singing "God Bless the USA" in the Veteran's Day parade.[7] This is furthered in the season 9 episode "German Guy", in which Herbert reveals he was a member of the United States Army Air Forces during World War II and was captured by Nazi soldiers. Although the Nazis could have placed Herbert into a Prisoner-of-war camp, they instead threw him into a concentration camp because they thought he was gay, having found several pictures of young boys in his wallet.[8]

Herbert has appeared on various occasions in Family Guy spinoffs, as in a cutaway in "A Cleveland Brown Christmas", an episode of The Cleveland Show.[9] In Laugh It Up, Fuzzball: The Family Guy Trilogy, [10][11] — Herbert appears as Obi-Wan Kenobi.[12] 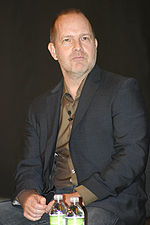 Mike Henry created and provides the voice for the character Herbert.

Herbert was created by writer and voice actor Mike Henry. Henry met Family Guy creator Seth MacFarlane when his brother Patrick and MacFarlane attended the Rhode Island School of Design. Henry was invited to work on Family Guy after the show was picked up, to write and create characters for the show. The first character he created was Cleveland Brown.[13] Then he created Herbert.[13]

Herbert was not a pedophile originally; Henry pitched the idea to the writers of the show, leading to the decision to make him a pedophile.[13] Henry also voices Herbert like most characters he created.[13] Henry based Herbert's voice and appearance on an elderly man he met when he worked in a grocery store when he was in high school. In an interview Henry described that man as a sweet person.[13]

Herbert is a retired elderly man. He frequently waits to receive the newspaper from the paperboy, who on many occasions is Chris. In the episode "To Love and Die in Dixie" (season 3, 2001) Herbert tries to get Chris inside the house by offering him a popsicle. While Herbert's relationship with his fellow Quahogians differs with each neighbor, Chris is the neighbor with whom Herbert most communicates, as Chris is the paperboy and Herbert is waiting for him each day. In the episode "The Courtship of Stewie's Father", (season 4, 2005) Chris breaks Herbert's window and, to pay off the debt, Chris helps him with chores around the house. Herbert starts to like Chris and later invites him to dinner.[14] The relationship of Herbert with the other members of the Griffin family is minimal. Peter and Lois have no knowledge of Herbert's pedophilia, as they have asked him to babysit and have no qualms with Chris visiting Herbert at his house.[5] Chris is also oblivious to Herbert's feelings for him, and considers him a friend.

"There are few things funnier than elderly pedophilia, especially when it is delivered by the soft, high-pitched whistling voice of Herbert, Spooner Street's resident lecher. Herbert always appears dressed in a blue robe, slippers, and aided by his walker. Herbert also has an equally aged and handicapped dog, Jesse.

"Herbert is one of the series' most popular minor characters, having appeared in an impressive 28 episodes. Part of Herbert's appeal is his ability to seamlessly integrate sexually suggestive comments into regular conversation, without being noticed by authority figures".

Herbert has received mixed reviews from critics. IGN has generally commented positively to Herbert. They pointed out that Herbert is one of the most popular recurring characters in the series,[15][16] referring to him (with his dog Jesse) as one of the recurring characters that stuck out from the rest.[16] They also noted that one of the reasons that Herbert is funny is because of his "soft, high-pitched whistling voice".[15] Although IGN has praised Herbert in general they have criticized some aspects of him.[15][16] In their review of "Blue Harvest", they criticized the choice of putting Herbert in the role of Obi-Wan Kenobi, stating that it never creates any actual humor.[17] They also criticized the constant use of Herbert, commenting that it was entertaining the first two times, but that it quickly became overused.[15][16] In their list of "What Else Should Family Guy Make Fun Of?", IGN commented that Herbert would be perfect to play Major Toht and Hogwarts' new Defence Against the Dark Arts instructor should Family Guy ever decides to make parodies of Raiders of the Lost Ark and Harry Potter, respectively.[18] Rowan Kaiser of The A.V. Club criticized the character, writing that his "every appearance brings out the worst tendencies of Family Guy".[19]

Herbert along with his dog Jesse, ranked spot number 16 in IGN's "Top 25 Family Guy Characters". Herbert ranked higher than Mort Goldman, Carter Pewtershmit and Greased Up Deaf Guy, who is also voiced by Henry.[15] Herbert also ranked number 5 on IGN's "The Cleveland Show Casting Couch", which showed characters that IGN would find interesting to put in The Cleveland Show.[16]

In 2004, the first series of Family Guy toy figurines was released by Mezco Toyz, each member of the Griffin family and other characters (including Herbert) had their own toy, with the exception of Stewie, of whom two different figures were made.[20] Over the course of two years, four more series of toy figures have been released.[21] Herbert is also featured on the Family Guy: Live in Vegas CD.[22]