Monster Magnet is an American stoner rock band. Hailing from Red Bank, New Jersey, the group was founded by Dave Wyndorf (vocals and guitar), John McBain (guitar) and Tim Cronin (vocals and drums). The band first went under the name "Dog of Mystery", "Airport 75", "Triple Bad Acid" and "King Fuzz" before finally settling on "Monster Magnet", taken from the name of a 1960s toy made by Wham-O, which Wyndorf liked when he was a child.[1]

In 1989, Monster Magnet released two demo cassettes: Forget About Life, I'm High on Dope and I'm Stoned, What Ya Gonna Do About It?. The band's first "official" release was a single "Lizard Johnny/Freakshop USA" on Long Island based Circuit Records. The first demo and single was recorded as a three piece (McBain, Wyndorf, Cronin). Before the second demo Jon Kleiman and Joe Calandra joined on drums and bass respectively making the line up Mcbain-gtr, Wyndorf-gtr/voc, Cronin-Voc, Kleiman-Drums, Calandra-Bass. An EP followedself-titled EP from Glitterhouse Records of Germany. The EP contained the songs "Snake Dance" and "Nod Scene", (both of which would appear again on Spine of God), and "Tractor", (which would be re-recorded later for Powertrip).

In 1990 the band signed with Caroline Records and released a single "Murder/Tractor". Cronin left shortly after. In 1991 they released their first full-length album, the cult classic Spine of God. The album is hailed as one the classics of the stoner rock genre ranking 28th on Heavy Planet's "Top 50 of All Time". The album contained the single "Medicine" (which would be recorded ten years later on God Says No), which was also the band's first music video. The band followed with a tour alongside rising grunge band Soundgarden.[2] The tour helped the band get a recording contract with major record label A&M Records.

Their final release with Caroline Records was an EP titled Tab which included, among two other marathon-length songs, a 32-minute track called "Tab...". The Tab EP was recorded before Spine of God, yet released after it. McBain quit the band soon after and was replaced by Atomic Bitchwax guitarist Ed Mundell.[2]

1993 saw the release of the album Superjudge. While the album was released on a major label (A&M Records), it fared poorly commercially. The songs "Twin Earth" and "Face Down" were released as singles (with accompanying videos), but it did little to help promote the album.

Dopes to Infinity (1995), the follow-up record, had a hit single in "Negasonic Teenage Warhead", which benefitted from a music video that received regular rotation on MTV. Still, the album was not the success the band had hoped for.

After the Dopes to Infinity tour, Wyndorf moved to Las Vegas, Nevada in order to begin working on Powertrip (1998), a breakthrough hit that finally earned the band a gold record. Guitarist Phil Caivano joined the band in 1998.[2] "Space Lord", the first single, was a major radio hit and the band went on tour with successful bands Aerosmith, Metallica, Rob Zombie and Marilyn Manson. The songs "Powertrip", "Temple of Your Dreams", and "See You In Hell" also received airplay on rock radio stations. The album charted at #97 on the Billboard 200.

After a two-year tour supporting Powertrip, the band released God Says No (2000), charting at #153 on the Billboard. However, it failed to match the commercial success of the band's previous release. After the release, Joe Calandra and Jon Kleiman left the band. They would be replaced by Jim Baglino and Michael Wildwood who recorded Monolithic Baby! and, after a short stint, Wildwood was replaced by former Love Among Freaks drummer Bob Pantella, respectively. The band also left A&M Records during this period.

Monster Magnet wrote and performed "Live For The Moment", which has been the official theme song of former WWE Superstar Matt Hardy since 2002. The song also appeared on the WWF Forceable Entry compilation.

In 2003, Monster Magnet released Greatest Hits, a double album featuring their best songs, some rarities, and music videos from their time with A&M. They then signed to the European label SPV, and in early 2004 released Monolithic Baby! throughout Europe. The U.S. release followed in May on SPV America. The band had a minor hit with the song "Unbroken (Hotel Baby)".

In March, 2005, Caivano departed after seven years service in a split described as amicable by Wyndorf. A followup to Monolithic Baby! was expected in March, 2006, to coincide with their European Tour, along with re-releases of Spine of God and Tab, both featuring new artwork and liner notes; however the tour and album releases failed to materialize.

The battle with one’s inner demons is the most personal fight any of us can undertake. The fight is at times a lonely, confusing journey. On the evening of February 27, Dave Wyndorf suffered a setback in his own fight and was hospitalized for a drug overdose. His full recovery is expected. We ask that all those he has encountered over the years or simply affected by his music to take a moment to think good thoughts of and for him. With the grace of God and those who love him we are all confident that Dave will rebound from this set back [sic] and continue to play and make great rock and roll.

In 2007, it was announced that Monster Magnet would release a new album, 4-Way Diablo, which had been put back for a year because of Wyndorf's overdose. It was released later that year. Later in 2007, another greatest hits collection, 20th Century Masters - The Millennium Collection: The Best of Monster Magnet, was released. "Powertrip" was used as the official theme song for the WWE pay-per-view, No Way Out 2007.

Prior to Monster Magnet's 2008 European tour, Caivano returned to the band.

On November 24, 2009, it was announced that Monster Magnet had signed a new deal with Napalm Records. The band also announced that they would enter the studio in January, 2010, to record a new album for a summer release.[4]

The new album, entitled "Mastermind", was released in October, 2010. The band embarked on a massive European tour, in August and then in November–December 2010, to promote their new album.

On the 3rd of November 2010, the first date of the band's European tour supporting Mastermind, Ed Mundell left the band to pursue other musical ventures, forming (9 Chambers). Dave Wyndorf stated that Garrett Sweeny (Riotgod) will be filling Ed's spot on the tour.[5]

Monster Magnet's style is heavily influenced by 1970s space rock bands such as Hawkwind and Captain Beyond.[citation needed] In addition to recording covers such as Hawkwind's "Brainstorm" (Doremi Fasol Latido, 1972), Wyndorf sometimes incorporated elements of space rock staples into his own songs. For instance, the Dopes to Infinity title track borrows some of its lyrics from "Lord of Light" (ibid.), and Superjudge's "Twin Earth" is a reinterpretation of Captain Beyond's "Mesmerization Eclipse" (Captain Beyond, 1972). Wyndorf also is a fan on 1960s comic books, particularly Jack Kirby. He mentions Kirby in the song "Melt" from God Says No. He also mentions MODOK (on "Baby Götterdämerung" from Powertrip) and Ego the Living Planet (on "Ego, The Living Planet" from Dopes to Infinity), both of which are Marvel Comics creations. "All Shook Out" from God Says No has a reference to "Children of the Atom" which is a reference to X-Men, also from Marvel Comics. Additionally, Marvel's Fantastic Four is referenced in the song The Titan Who Cried Like a Baby on their Mastermind album. 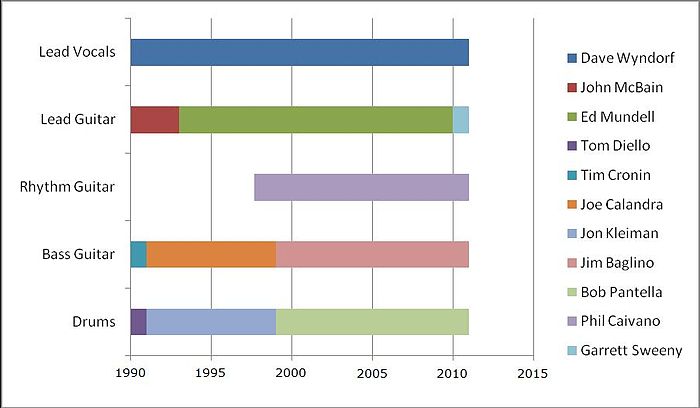 Since the mid 1990s, Cronin and Kleiman have fronted The Ribeye Bros. In 2003, Pantella mixed and plays bass on The Glasspack's Bridgeburner album. Mundell also played lead guitar on The Glasspack's track "Peepshow." The album was released on Small Stone Records in May 2004.[7]

In 2007 Pantella joined The Atomic Bitchwax. Also in 2007, Pantella and Baglino formed RIOTGOD, along with Garrett Sweeny (of Psycho Daisy), and Mark Sunshine.

In 2010, Pantella appeared on LadyKiller's debut self-titled release. He is credited as having played drums on 13 of the 16 songs, in addition to having tracked more than half of the album at his recording studio in Sayerville, NJ.

In 2010, the first single "American Dream" was released on One Voice by Capricorn, a band formed by Phil Caivano, Todd Youth (of Murphy's Law, Danzig, Ace Frehley, Glen Campbell and The Chelsea Smiles) and Karl Rosqvist (of Danzig, The Chelsea Smiles and Michael Monroe).[8]