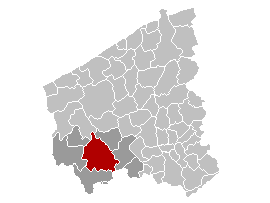 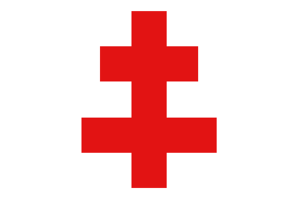 Ypres (French, generally used in English, French IPA2|ipʁ, English IPAEng|ˈiːprə), Ieper (official name in Dutch, pronounced IPA|/ˈiːpər/), or Ypern (German) is a Belgian municipality located in the Flemish province of . The municipality comprises the city of Ypres and the villages of , , , , , , , , , and .

During , Ypres was the centre of intense and sustained battles between the German and the Allied forces.

Origins to World War I

Ypres is an ancient town, and is known to have been raided by the Romans in the first century BC. [ [http://www.greatwar.co.uk/westfront/ypsalient/ypres.htm Ypres/Ieper: historical background] ] During the , Ypres was a prosperous city with a population of 40,000, [ [http://www.ethesis.net/staten_van_vlaanderen/svv_hfst_5.htm See chapter 5.6.2 (in Dutch)] ] renowned for its trade with England, which was mentioned in the . It was the hometown of , a commander of Flemish mercenaries in England who was reckoned among the more able of the military commanders fighting for King Stephen in his prolonged civil war with the .

In order to prosper and maintain its wealth, Ypres had to be fortified to keep out invaders. Parts of the early ramparts, dating from 1385, still survive near the Rijselpoort (Lille Gate). The famous Cloth Hall was built in the thirteenth century. During this time also, cats, then the symbol of the devil and witchcraft, were thrown off Cloth Hall, possibly due to the belief that this would get rid of evil demons. Today, this act is commemorated with a triennial Cat Parade through town. Over time, the earthworks were replaced by sturdier masonry and earthen structures and a partial . Ypres was further fortified in 17th and 18th centuries while under the occupation of the and the French. Major works were completed at the end of the 17th century by the French military engineer .

Ypres was a strategic position during because it stood in the path of Germany's planned sweep across the rest of Belgium and into France from the North (the ). Moreover, the neutrality of Belgium was guaranteed by Britain: Germany's invasion of Belgium brought the British Empire into the war. The German army surrounded the city on three sides, bombarding it throughout much of the war. To counterattack, British, French and allied forces made costly advances from the Ypres into the German lines on the surrounding hills.

In the ( to ) the Allies captured the town from the Germans. In the ( to ) the Germans used for the first time on the (they had used it earlier at the on ) and captured high ground east of the town. The first gas attack occurred against Canadian, British, and French soldiers; including both metropolitan French soldiers as well as ese and n (light infantry) from French Africa. The gas used was chlorine gas. , also called Yperite from the name of this city, was also used for the first time near Ypres in the autumn of 1917.

Of the battles, the largest, best-known, and most costly in human suffering was the ( to , also known as the Battle of Passchendaele) in which the British, Canadians, and French forces recaptured the ridge east of the city at a terrible cost of lives. After months of fighting, this battle resulted in nearly half a million casualties to all sides, and only several miles of ground won by Allied forces. The town was all but obliterated by the artillery fire.

English-speaking soldiers in that war often referred to Ypres by the (perhaps humorous) mispronunciation "Wipers". British soldiers even self-published a wartime newspaper called the "".

After the war the town was rebuilt using money paid by Germany in reparations, with the main square, including the Cloth Hall and town hall, being rebuilt as close to the original designs as possible. (The rest of the rebuilt town is more modern in appearance.) The Cloth Hall today is home to , dedicated to Ypres's role in the First World War.

Ypres these days has the title of "city of peace" and maintains a close friendship with another town on which war had a profound impact: . The association may be regarded as somewhat gruesome because both towns witnessed warfare at its worst: Ypres was one of the first places where was employed, while Hiroshima suffered the debut of . The city governments of Ypres and Hiroshima advocate for cities never to be targets again and campaign for the abolition of nuclear weapons. The City of Ypres hosts the international campaign secretariat of Mayors for Peace, an international Mayoral organization mobilizing cities and citizens worldwide to abolish and eliminate nuclear weapons by the year 2020. [http://www.2020visioncampaign.org Mayors for Peace 2020 Vision Campaign]

War graves, both of the Allied side and the Central Powers, cover the landscape around Ypres. The largest are and Tyne Cot Commonwealth war cemetery. The countryside around Ypres () is featured in the famous poem by , "".

Saint George's Memorial Church commemorates the British and Commonwealth soldiers, who died in the three battles fought for Ypres during World War I.

The imposing Cloth Hall was built in the 13th century and was one of the largest commercial buildings of the Middle Ages. The structure we see today is the exact copy of the original medieval building, rebuilt after the war. The belfry that surmounts the hall houses a 49-bell . The whole complex was designated a by in 1999.

The Gothic-style Saint Martin's Cathedral, originally built in 1221, was also completely reconstructed after the war. It houses the tombs of , and father of the religious movement known as , and of Robert of Bethune, nicknamed "The Lion of Flanders", who was (1273-1322) and (1305–1322).

The 2 in Ypres commemorates those soldiers of the British Commonwealth - with the exception of New Zealand and Newfoundland - who fell in the during the First World War before 16 August 1917, who have no known grave. Those who died from that date - and all from New Zealand and Newfoundland - are commemorated elsewhere. [ [http://www.cwgc.org/search/cemetery_details.aspx?ceetery=91800&mode=1] "It commemorates those of all Commonwealth nations (except New Zealand) who died in the Salient, in the case of United Kingdom casualties before 16 August 1917. Those United Kingdom and New Zealand servicemen who died after that date are named on the memorial at Tyne Cot, a site which marks the furthest point reached by Commonwealth forces in Belgium until nearly the end of the war. Other New Zealand casualties are commemorated on memorials at Buttes New British Cemetery and Messines Ridge British Cemetery."] [http://www.cwgc.org/admin/files/cwgc_ypressalient.pdf] The memorial's location is especially poignant as it lies on the eastward route from the town which allied soldiers would have taken towards the fighting - many never to return. Every evening since 1928, traffic around the imposing arches of the Menin Gate Memorial has been stopped while the "" is sounded beneath the Gate by the local fire brigade. This tribute is given in honour of the memory of soldiers who fought and died there.
[

The ceremony was prohibited by occupying German forces during the Second World War, but it was resumed on the very evening of liberation &mdash; , &mdash; notwithstanding the heavy fighting that still went on in other parts of the town. The lions that marked the original gate were given to Australia by the people of Belgium and can be found at the Australian War Memorial in Canberra.

:::"Who will remember, passing through this Gate,:::The unheroic Dead who fed the guns?"

*The Cat Parade ("Kattenstoet") takes place every three years on the second Sunday of May. It involves the throwing of toy cats from the belfry and a colourful parade of cats and witches. The last edition of the Cat Parade took place in May, 2006.
*Ypres is also the home of The since its creation in 1965. It is organized by the Auto Club Targa Florio. Some of the drivers are among the best-known names in rallying, such as , , , , , , , and among others.
*Ypres holds an annual canoe polo tournament in which teams from all over Europe to play

1 The was restricted by the French-speaking Belgian ruling class at the time of the First World War so that as a result the French name was used by British soldiers fighting there&mdash;they however, pronounced it "Wipers", probably as a result of poor education in pronunciation of the French language rather than any deliberate humour.Fact|date=February 2007

2 The gate is called "Menin Gate" because it is situated on the road to another Flemish city, in French or a (depricated) variant name in English, in Dutch or English.