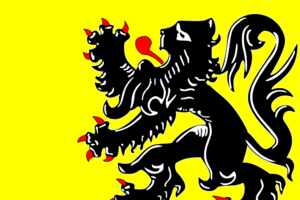 The Flemish Region (Dutch: "Vlaams Gewest") is one of the three official regions of the Kingdom of ndash alongside the and the . It occupies the northern part of Belgium and has a surface area of 13,522 km² (44.29% of Belgium).

Immediately after its establishment, the region transferred all its constitutional competencies to the . The current Flemish authorities (, ) therefore represent all the , including those living in the Brussels-Capital Region. Hence, the Flemish Region is governed by the Flemish Community institutions. However, members of the Flemish Community parliament who were elected in Brussels-Capital Region, have no right to vote on Flemish regional affairs.

is part of Flanders, but only for all its Flemish inhabitants and local institutions (which indeed live in both the Flemish Community and the Brussels Region). It is also the official capital of Flanders.

The official language is Dutch, often referred to by its inhabitants as . French may be used for certain administrative purposes in a limited number of the so-called "" around the Brussels Capital Region and on the border with .