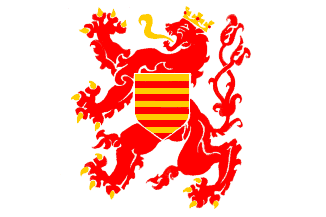 :"This article deals with a province in Belgium. For other uses of Limburg, see: . For the town of Limbourg or Limburg in Belgium, see: "

Limburg is the easternmost province of (which is one of the three regions of ), and is located west of the Maas river. It borders on (clockwise from the North) the and the Belgian provinces of Liège, and Antwerp. Its capital is . It has an area of 2,414 km² which is divided into three s ("arrondissementen" in Dutch) containing 44 municipalities. Among them is , one of the economical centres of the province. An educational centre, as a result of the presence of a university, is near Hasselt.

As in all Flemish provinces, the official language is Dutch, but two municipalities: and are to a certain extent allowed to use French to communicate with their citizens; these are called the municipalities with language facilities. Other such special municipalities can be found along the border between Flanders and Wallonia, and between Wallonia and the German-speaking area of Belgium.

's name derives from the fortified castle town known as , situated on the river in the , now in the Walloon province of Liège. It was the seat of the medieval which extended into the region north of the city of Liège. However, most the area of the current Dutch Limburg was not part of this polity but was divided among several states including the , the , and the , as well as the Duchy of Limburg. A result of this division is still evident in the plethora of distinct varieties of the spoken in Limburg municipalities.

Following the , the great powers (, , , , and ) united the region with the new in 1815. A new province was formed and was to receive the name "," after its capital. The first king, William I, who did not want the name Limburg to be lost, insisted that the name be changed to "Limburg." As such, the name of the new province derived from the old that had existed until 1648 within the triangle of , Liège, and .

When the Catholic South, both the Dutch and French speaking regions, split away from the mainly Calvinist, Dutch North in the of 1830, the province of Limburg was at first almost entirely under Belgian rule. In 1839 Limburg was split into so-called "Dutch" Limburg and "Belgian" Limburg, though it became Flemish when all provinces in Belgium came under control of institutional regions.

is the official anthem of both Belgian and Dutch Limburg.

Not to be confused with, though related to, the Dutch province of Limburg.

An internationally well known Limburgian place is , where racing circuit Terlamen is located, on which in the past among others two Worldchampionships in roadcycling were held, as well as several Formula one car races.