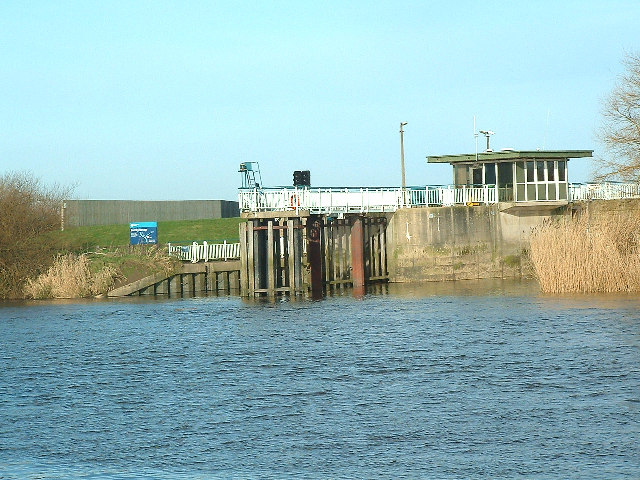 The Derwent is a in in the north of . It is used for water abstraction, leisure and sporting activities and effluent disposal as well as being of significant importance as the site of several nature reserves. It is the subject of conflicting interests as well as having an interesting ice age past and a long recorded history.

It rises on Moor in the , flows southwards as far as its confluence with the river Hertford then westwards through the Vale of Pickering, south through Kirkham Gorge and the Vale of York and joins the River Ouse at Barmby on the Marsh. The confluence is unusual in that the Derwent converges on the Ouse at a shallow angle in an upstream direction.

The River Derwent catchment area includes the Upper Derwent, River Rye, River Hertford, Bielby Beck and Pocklington canal and their tributaries. It covers an area of 2057 square kilometres and includes the towns of Stamford Bridge, Malton, Pickering, , and Scarborough. The area is bounded by the Cleveland Hills, North York Moors and Hambleton Hills to the north, the Yorkshire Wolds and the coast to the east, the Vale of York to the west and the River Ouse and Humber Estuary to the south. The area around the river is primarily rural in nature with grazing moorland in the upland areas and a variety of agricultural uses at lower levels. There are large areas of designated conservation sites throughout the area.

Water abstracted from the Derwent supplies towns and cities such as Hull, Leeds, York and Scarborough. The river is of generally good quality with BOD levels remaining below 2 mg/l all year round. It is typical of Northerly British rivers in that it exhibits acid flushes at peak times of rainfall, namely during the winter months.

There are also several effluent sites scattered along this river at Malton, Stamford Bridge, Elvington, and .

At its source on the North York Moors the River Derwent and its tributaries run over limestone from the Jurassic geological period. Downstream of Stamford Bridge the catchment area is mainly of Sherwood sandstone from the Triassic period. To the east this sandstone dips under Mercia mudstone, also of the Triassic period.Some of the underlying rocks are major s and provide a valuable source for water supply in the area. The major aquifers are the Corallian limestone, chalk and Sherwood sandstone. The Corallian limestone outcrops on the hills surrounding the Vale of Pickering and is made up of a series of limestones and sandstones. This aquifer is unconfined in parts and gets water from the River Rye and River Derwent through s.

Rainfall and climate conditions vary slightly across the Derwent catchment area due to the topography.Annual rainfall ranges from averages of 600mm at Barmby Barrage to over 1100mm at its source on the North York Moors.

Course and character of the Derwent catchment area

For management purposes the catchment area has been divided into ten smaller units.

*River HertfordThe River Hertford starts close to Hunmanby near the seaside town of Filey and flows westwards into the Derwent. The management area is about 83 km² with a largely rural economy of arable farming and managed grassland in a flat to undulating landscape. The underlying rock is Corallian limestone but overlying deposits insulate the river water from this aquifer. Close to the river the land is less than 30 m high whilst to the south of the area on the slopes of the Yorkshire Wolds it reaches 100m.

*Low MarishesHaving been joined by the River Hertford the Derwent turns sharply west and flows along the Vale of Pickering past Yedingham village and is joined by the River Rye four miles upstream from Malton then flows southwards. It covers an area of about 273km² and overlies the Corallian limestone aquifer. The topography and land use are varied. The flat valley floor is less than 20 metres in height and here the dominant land use is arable farming. In the northern part of this area lies the North York Moors National Park where the land is used mainly for upland grazing and forestry. To the south are the Yorkshire Wolds and here the land rises to over 180 metres in height.There are wastewater treatment works at Thornton le Dale, East Heslerton and Sherburn.

*Kirkham BridgeAfter leaving Malton it flows south through the steep sided valley of Kirkham Gorge past Howsham weir and Mill to Buttercrambe.

*ButtercrambeAt Buttercrambe it continues southwards and through Stamford Bridge.The above two areas have similar physical and ecological characteristics. They have a combined catchment area of 256km². Part of the Kirkham Bridge area is underlain by Corallian limestone. The areas are predominantly rural with undulating scenery. The Howardian Hills lie to the north of Buttercrambe and the Yorkshire Wolds to the east of Kirkham Bridge. There are many scattered villages in the agricultural landscape. The land near to the river is less than 20 metres high.The River Derwent Special Area of Conservation runs through the length of both areas. Wastewater treatment works are located at Foston, Leavening, Harton, Whenby, Welburn and Settrington.

*Sutton upon DerwentIt continues southwards, cutting through the slightly higher surrounds of the Escrick moraine and into the Vale of York and past Wheldrake. This area covers 79km². It is low undulating agricultural land where the largest settlement is Stamford Bridge. The River Derwent in this area has many designated riverine conservation sites. There is a substantial public water supply abstraction point in the area which supplies 4.5 million people. Significant wastewater treatment sites exist at Elvington, Stamford Bridge and Bugthorpe.

*East CottingwithAt the Derwent meanders across its flood plain still going south, and collects the waters of the Bielby Beck and the which form the major part of the catchment.This area is 199km². It is largely rural, having several scattered villages amongst open fields and common land in the . is the largest settlement. The area lies also on the undulating foothills of the . Pocklington canal is 15.6 km long and joins the Derwent at . In the southern part of the area the land is flat and low. On either side of the watercourse the land is rich and it is farmed as arable or permanent grassland. There are also hay meadows and pastures, known locally as Ings, which form part of the Lower Derwent Valley designated conservation sites. There are wastewater treatment sites at Pocklington, , and .

*Barmby BarrageAt Barmby Barrage the waters of the Derwent are separated from the tidal Ouse to prevent the tides polluting the water extraction plant at Loftsome Bridge. This area consists of the river Derwent from Sutton upon Derwent lock downstream to the confluence with the River Ouse at Barmby Barrage. It covers 116km² and it overlies the Sherwood sandstone major aquifer. It is largely rural with a few small villages in an agricultural landscape of pastures, meadows and arable fields. There are several designated conservation sites. Wastewater treatment works are sited at Wheldrake, Bubwith, Ellerton and North Duffield.

Water from the tidal River Ouse is prevented from entering the Derwent by means of a barrage at Barmby on the Marsh.

The main river, its tributaries and adjacent wetlands are significant for nature conservation, ecology and landscape. The area contains a wide diversity of habitats and a number of designated sites.
*s provide protection to birds, their nests, eggs and habitats.(SPA's)

* contribute to biodiversity by maintaining and restoring habitats and species other than birds.(SAC's)

*Ramsar Sites are wetlands of international importance designated under the

The unusual upstream facing outfall of the Derwent is man made. It is believed to have been cut during the Roman occupation of Britain to reduce the distance between the Derwent mouth and the Roman legionary headquarters at York by 9 miles. The first navigation weir, also believed to be of Roman origin, was a flash built near Wheldrake to raise the level of the river upstream and regulate its flow downstream.

During the reign of King John (1199-1216) a water mill on the Derwent at Wheldrake was given to the monks of and later in the thirtenth century a weir is known to have existed at the same place.By 1462 when the Lord Mayor of York was authorised to "correct and amend defects" of the Derwent "from the Ouse as far as the town and bridge of Sutton upon Derwent" the river must have been navigable at least to Sutton. A corn mill existed at Sutton upon Derwent by 1597. It was rebuilt in 1836 and continued in use until 1960.There are other water mill sites at Stamford Bridge, Buttercrambe, Howsham, Kirkham and Malton.

Before the 18th century coal was usually taken by coastal shipping from Newcastle or Sunderland and put into smaller vessels at coastal ports to be delivered to upriver destinations. For this purpose there was an interest in improving navigation on the Derwent as far as Malton. In 1702 an was passed authorising its proprietors to improve the river. Towpaths were laid out and "locks, turnpikes, pens for water, wharfs and warehouses" were constructed. The promoters of these works were allowed to charge tolls on the cargo carried on any part of the river.

The owners of land near to the river complained in 1722 that the new locks and weirs caused them to lose income because their meadows were more often flooded. In 1793 thirty five vessels were trading from Malton, carrying corn downstream to the West Riding towns and returning upstream with coal. Virtually every village and hamlet near the tidal river had its own landing place.

In 1845 the was built to join the West Riding to Scarborough via Malton. Much of the freight traffic of the Derwent Navigation was transferred to the cheaper railway. In 1855 the railway managers bought the Navigation and to further stifle competition they charged high tolls on barge freight.More cargo was moved to the railway and by the 1890s the only regular trade on the Derwent was on its lower reaches.

By the beginning of the 20th century the river was being used for pleasure craft and by 1920 there were craft based regularly at Stamford Bridge and Kirkham Abbey. After floods in 1930 damaged the lock gates at Kirkham several vessels were stranded upstream.In 1935 statutory Right of Navigation was revoked above Sutton Lock. There followed a long series of fights for public access against riparian interests which continue to the present day.

The economic profile of the River Derwent is dominated by its value as a water resource with the Derwent supplying Leeds, Hull, York and Scarborough as well as agricultural holdings along its course. The river is popular with anglers throughout its course and has many valuable conservation areas.