Heresy
"Heretical" redirects here. For the website, see Heretical (website).
For the collectible card game, see Heresy: Kingdom Come.
Not to be confused with hearsay.

Heresy (from Greek αἵρεσις, which originally meant "choice") is a controversial or novel change to a system of beliefs, especially a religion, that conflicts with established dogma.[1] It is distinct from apostasy, which is the formal denunciation of one's religion, principles or cause,[2] and blasphemy, which is irreverence toward religion.[3] The founder or leader of a heretical movement is called a heresiarch, while individuals who espouse heresy or commit heresy, are known as heretics. Heresiology is the study of heresy.

The word heresy is usually used within a Christian, Jewish, or Islamic context, and implies something slightly different in each. In certain historical Christian and Jewish cultures, heresy was punishable by law. In modern times, the word heresy is often used in jest and without religious context.

The use of the word heresy in the context of Christianity was given wide currency by Irenaeus in his tract Contra Haereses (Against Heresies) to describe and discredit his opponents during the early centuries of the Christian Community. He described the community's beliefs and doctrines as orthodox (from ὀρθός, orthos "straight" + δόξα, doxa "belief") and the Gnostics' teachings as heretical. He also pointed out the concept of apostolic succession to support his arguments. 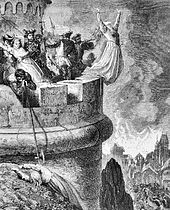 Massacre of the Waldensians of Mérindol in 1545.

The first known usage of the term in a civil legal context was in 380 AD by the "Edict of Thessalonica" of Theodosius I. Prior to the issuance of this edict, the Church had no state-sponsored support for any particular legal mechanism to counter what it perceived as "heresy". By this edict, in some sense, the State's authority and that of the catholic Church became somewhat overlapping. One of the outcomes of this blurring of Church and State was the sharing of State powers of legal enforcement between Church and state authorities. At its most extreme reach, this new secular reinforcement of the Church's authority gave Church leaders the power to, in effect, pronounce the death sentence upon those whom the Church considered heretical.

Within five years of the official "criminalization" of heresy by the emperor, the first Christian heretic to be prosecuted, Priscillian was executed in 385 by Roman officials. For some years after the Reformation, Protestant churches were also known to execute those whom they considered as heretics, including Catholics. The last known heretic executed by sentence of the Roman Catholic Church was Cayetano Ripoll in 1826. The number of people executed as heretics under the authority of the various "ecclesiastical authorities" is not known, however it most certainly numbers into the several thousands.[citation needed]

The Roman Catholic Church had always dealt sternly with strands of Christianity that it considered heretical, but before the 12th century these tended to centre around individual preachers or small localised sects. By the 12th century, more organised groups such as the Waldensians and Cathars were beginning to appear in the towns and cities of newly urbanized areas. In Western mediterranean France, one of the most urbanized areas of Europe at the time, the Cathars grew to represent a popular mass movement and the belief was spreading to other areas.[4] The Cathar Crusade was initiated by the Roman Catholic Church to eliminate the Cathar heresy in Languedoc.[5]

Perhaps due to the many modern negative connotations associated with the term heretic, such as the Spanish inquisition, the term is used less often today. There are however, some notable exceptions: see for example Rudolf Bultmann and the "character" of debates over ordination of women and gay priests. The subject of Christian heresy opens up broader questions as to who has a monopoly on spiritual truth, as explored by Jorge Luis Borges in the short story "The Theologians" within the compilation Labyrinths.[6]

Orthodox Judaism considers views on the part of Jews which depart from the traditional Jewish principles of faith to be heretical. In addition, the more right-wing groups within Orthodox Judaism hold that all Jews who reject the simple meaning of Maimonides's 13 principles of Jewish faith are heretics.[7] As such, most of Orthodox Judaism considers Reform and Reconstructionist Judaism to be heretical movements, and regards most of Conservative Judaism as heretical. The liberal wing of Modern Orthodoxy is more tolerant of Conservative Judaism, particularly its right wing, as there is some theological and practical overlap between these groups.

Many in the two main bodies of Islam—Sunnis and the Shi'as—have regarded the other as heretical. Groups like the Ismailis, the Hurufiya, the Alawis, the Bektashi and even the Sufis have also been regarded as heretical by some, such as the ultra-conservative Salafi. Although Sufism is often though not completely accepted as valid by Shi'a and many Sunnis, the relatively recent movement of Wahhabism view it as heretical.

Starting in medieval times, Muslims began to refer to heretics and those who antagonized Islam as zindiqs, the charge being punishable by death.[8]

Today, heresy can be without a religious context as the holding of ideas that are in fundamental disagreement with the status quo in any practice and branch of knowledge. Religion is not a necessary component of the term's definition. The revisionist paleontologist Robert T. Bakker, who published his findings as The Dinosaur Heresies, jokingly treated the mainstream view of dinosaurs as dogma.[citation needed]

The term heresy is also used as an ideological pigeonhole for contemporary writers because by definition heresy depends on contrasts with an established orthodoxy. For example, the tongue-in-cheek contemporary usage of heresy, such as to categorize a "Wall Street heresy" a "Democratic heresy" or a "Republican heresy", are metaphors which invariably retain a subtext that links orthodoxies in geology or biology or any other field to religion. These expanded metaphoric senses allude to both the difference between the person's views and the mainstream, and the boldness of such a person in propounding these views.

Variance from orthodox Marxism–Leninism is described as "right" or "left deviationism". The Church of Scientology uses the term "squirreling" to refer to unauthorized alterations of its teachings or methods.