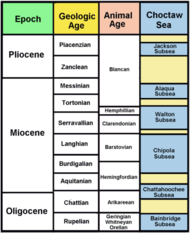 The Choctaw Sea was a Cenozoic eutropical subsea, which along with the Okeechobean Sea, occupied the eastern Gulf of Mexico basin system bounding Florida.

The Choctaw Sea was named for the Choctaw or Choctawhatchee River of northern Oligocene Florida. It occupied most of the Florida Panhandle including the river deltas of the Choctawhatchee River, Apalachicola River, and Ochlockonee River. At its maximum coverage it encompassed an area as far north as the city of Bainbridge in Southwest Georgia and as far to the southeast as Taylor County, Florida, United States. 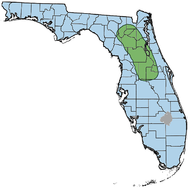 Depiction of Oligocene Orange Island which was the first emerging landmass.

The Choctaw Sea was divided further in to two groups of three subseas based upon marine fauna. These subseas were named: 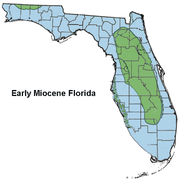 Orange Island lengthens and gets wider, the Gulf Trough is shallower and more narrow.

The Bainbridge Subsea was named for the fossil beds of Bainbridge, Georgia and is the oldest subsea. This period spanned the existence of the Gulf Trough between Georgia and Florida's Orange Island. It was a warm but cooling climate, moving towards an ice age. The Suwannee Limestone was established during this time. Basilosaurus cetoides and Zygorhiza, early toothed whales, as well as Protosiren, an extinct ancestor of the Manatee, inhabit these waters and are the earliest mammal fossils uncovered with specimens from Citrus County in dolomite ~40—37 Ma. and Marion County, Florida dating from 37.2—33.9 Ma.[1][2] 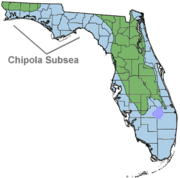 The Chipola Subsea from the Burdigalian through Langhian development of Florida.

The Chipola Subsea was named after the Chipola Formation and was formerly known as the Chipola Sea. It was created by rising sea level flooding the area once again. The Torreya Formation,[4] a geologic formation extending from Gadsden to Hamilton Couny was established during this period. A somewhat narrow land bridge exists with a width from Madison County to Duval County, Florida extending in to Georgia. The Middle Miocene Disruption, an extinction of many mammal genera begins.

A very short dry period follows the Chipola lasting possibly 1 million years. During the time the Middle Miocene Disruption continues. Forests slowly draw in massive amounts of carbon dioxide, gradually lowering the level of atmospheric CO2 from 650 ppmv down to around 100 ppmv.

The Walton Subsea was named for the fossil beds of Walton County. 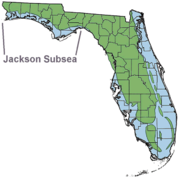 The Alaqua Subsea was named for the fossil beds found along Alaqua Creek, Walton County. The period of time after the Alaqua experienced a somewhat long dry period. A major event was the Messinian salinity crisis or dry Mediterranean. It was replenished with the Zanclean flood which raised the world-wide sea level 10 meters or 33 feet.[5]

The Jackson Subsea was named after the Jackson Bluff Formation and formerly called the "Jackson Sea." It was created during the rise in sea level during the Pliocene. During this period the last glacial period known as the Wisconsin ice age begins.