Christina of Denmark, Queen of Norway 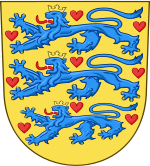 Coat of arms of Denmark

Christina Knutsdatter of Denmark, in Norway known as Kristin Knutsdotter, (c. 1118–1139) was a Danish princess and a Norwegian Queen consort, spouse of King Magnus IV of Norway.

Christina was born to Prince Canute Lavard of Denmark and Princess Ingeborg of Kiev. Her marriage to Magnus was arranged by her maternal aunt, Malmfred, former Queen of Norway and the former stepmother of Magnus, and at the time the wife of Christines paternal uncle Prince Erik. Christine was engaged in 1131, and the marriage took place in 1132/33.

Her husband king Magnus supported the struggle of her father Canute and uncle Erik against King Niels of Denmark. In 1133, Erik and Malmfrid fled Denmark for Norway and the protection of Magnus. After Queen Christine, however, found out that Magnus had plans to betray them, she warned them and Erik and Malmfrid allied themselwes with the rival of king Magnus, king Harald IV of Norway. King Magnus then separated from queen Christine.