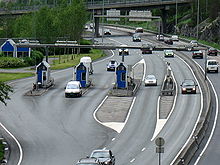 Oslo Package 1 was partially financed through road tolls, such as at Abildsø

Oslo Package 1 (Norwegian: Oslopakke 1) was a political agreement and plan for introducing an urban toll ring around Oslo, Norway, and making 31 investments to road infrastructure in Oslo and Akershus. The package was approved in 1988, and toll charges were introduced in 1990. It was supplemented by Oslo Package 2, which included a similar scheme for public transport. In 2008, they were both replaced by Oslo Package 3.[1] 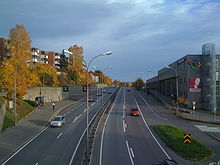 Ring 3 received much of the funding

During the 1970s, car traffic in Oslo greatly increased, and there was a political desire to speed up investments in motorways and tunnels in the city. This would allow increased capacity, and at the same time reduce the amount of traffic in the city streets. In particular, Rådhusgata, The City Hall Square and the areas around them were congested, and hindered people from accessing the fjord. During the 1980s, the politic environment shifted towards reduced public spending. In 1982, Minister of Transport, Inger Koppernæs from the Conservative Party, promised increased government grants to local authorities that introduced toll roads.[2]

The first project was to build the Festning Tunnel, that would, along with the intersection at Vestbanen, allow The City Hall Square to become car free. In 1986, both the city council in Oslo and Akershus County Council set demands for a new toll ring scheme, requiring that the state grant extra funding equal to the toll charges: the krone for krone principle. This was similar to what had been agreed upon in Bergen. A report was made by the Second cabinet Willoch, where the initial project, Fjellinjen, was to receive an annual grant of NOK 230 million. While there was local resistance, the plan was popular in parliament.[2]

In 1987, Oslo and Akershus were in agreement about the placement of the eighteen toll plazas. The ring would be located within Oslo, and there was more resistance in Oslo than in Akershus. To increase support in Oslo, 20% of the funds were to go to public transport. A committee with representatives from Oslo, Akershus, the state and the Norwegian Public Roads Administration was created, while the planning became the responsibility of the Public Roads Administration. 70% of the investments would be used in Oslo. There were three plan periods from 1990 to 2001, and additional plans for the period until 2005 were also made. Estimates showed NOK 8.1 billion in investments in 1990–2001. The project was finally approved by parliament on 10 June 1988. The goals of the project were to increase capacity by 30–50%, and to avoid increased congestion by building from the city center outwards. Without the package the investments would have taken about 30 years.[3]

The company Fjellinjen was founded on 13 February 1986 by the Municipality of Oslo, to secure financing for the Festning Tunnel. With the 1988 decision, the company was also given the responsibility to finance the rest of the toll ring. As a result, Akershus bought 40% of the company in 1990.[4]

In 1996, the work to create a similar package for public transport was started. In particular, the Asker Line and Follo Line railways, the Ring Line and some extensions to the Oslo T-bane, and improvements to the infrastructure for buses and trams were included. The goal was to create sufficient funding for the project, which without additional funding would take 25 years to finance, so that it could be done in 10 years. The package was passed by parliament in 2000, and would insure NOK 15.6 billion in funding. In addition to public grants, each ticket in the public transport system would contribute NOK 0.75, plus a NOK 2 increase for each passing of the toll ring.[5]

Following the termination of Oslo Package 1 in 2008, a new political compromise was created for another twenty years of investments: Oslo Package 3. It includes both investment money for road, rail and bus infrastructure, as well as money for operating public transport. The total budget is NOK 58 billion. It was passed by parliament on 13 March 2008.[6] 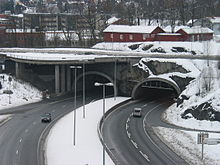 The Granfoss Tunnel was built by funds from Oslo Package 1

The main objective of the package was to move road traffic to the ring roads, reducing the amount of traffic in the city center and freeing up capacity in the main arteries. In the 1990s, a number of tunnels were built, and the ring roads improved. During the 2000s the focus was moved towards the arteries.[7]

European Route E18 through the city centre received much of the initial investments, with the Festning Tunnel opening in 1990 and the Vestbane Intersection in 1994. The City Hall Square was subsequently closed to cars. Also in the city centre were upgrades to National Road 162 in 1990–91, that included the Vaterland Tunnel. A new intersection for National Road 4 was also built at Hausmannsgate.[8]

The E6 was upgraded between Vinterbro and Vassum in 1993. E18 received a new intersection at Lysaker and a connection to the European Route E16 at Sandvika, including the Kjørbo Tunnel (both 1993). The following year, the Bekkestua Tunnel opened on National Road 160.[9] Norwegian National Road 4 received new section from Skøyen to Slattum in 1993, and from Gjelleråsen to Slattum in 2003. National Road 159 was upgraded between Knatten and Lørdagsrud in 1997, and from Lørdagsrud to National Road 22 the following year. The same road got a bypass past Strømmen in 2003.