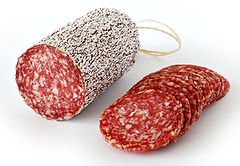 For the city in Iran, see Salami, Iran; for the district, see Salami District; for other uses, see Salama and Salameh; for the broader term "Salumi", see Charcuterie.

Salami is cured sausage, fermented and air-dried meat, originating from one of a variety of animals. Historically, salami has been popular among Southern European peasants because it can be stored at room temperature for periods of up to 10 years, supplementing a possibly meager or inconsistent supply of fresh meat. Varieties of salami are traditionally made in Italy, France, Hungary, Germany, Spain, Serbia, Slovenia, Croatia, Czech Republic, Netherlands, Belgium, Luxembourg, Greece, Romania, Macedonia, Bulgaria, Poland and Turkey.

The word salami, as currently used in English, is actually the plural form of the Italian salame;[1] it is indifferently used as a singular or plural word in English for cured meats in a European, particularly Italian, style. In Romanian, Bulgarian and Turkish it is Salam; in Hungarian it is szalámi; in French it is saucisson.

The word originates from the word Sale (salt) with a termination -ame used in Italian as an indicator of collective nouns;[2] the original meaning was thus all kind of salted (meats). The Italian tradition of cured meats including several styles, the word salame soon specialised to indicate only the most popular kind, made with ground, salted and spiced meat forced into animal gut with an elongated and thin shape, then left to undergo some kind of fermentation process.

A traditional salame, with its typical marbled appearance, is made from one or more of the following meats:

Additional ingredients may include:

The raw meat mixture is usually allowed to ferment for a day, then the mixture is either stuffed into an edible natural or inedible cellulose casing and hung to cure. Heat treatment to about 40 °C may be used to accelerate further fermentation and start the drying process. Higher temperatures (about 60 °C) are used to stop the fermentation when the desired pH is reached, but the product is not fully cooked (75 °C or higher). The casings are often treated with an edible mold (Penicillium) culture as well. The mold is desired as it imparts flavor and prevents spoilage during the curing process. 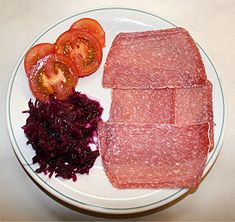 Varieties of salami include:

Many Old World salami are named after the region or country of their origin. Examples include Arles, Genoa, Hungarian and Milano salame. Many are flavored with garlic. Some types – including a few varieties from Spain, most Hungarian types (Pick salami), and southern Italian styles (such as those from Naples, which in turn originated American pepperoni) include paprika or chili powder. Varieties are also differentiated by the coarseness or fineness of the chopped meat as well as the size and style of the casing used. 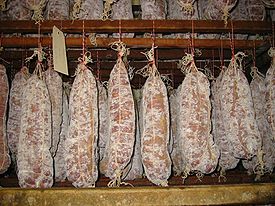 Though completely uncooked, salami are not "raw" per se; they have been prepared via curing. The term salame cotto refers to salami cooked or smoked before or after curing and it is typical of Piedmont region in Italy. This is done to impart a specific flavor but not to cook the meat. Before curing, a cotto salame is still considered raw and is not ready to be eaten.

Salami are cured in warm, humid conditions to encourage growth of the bacteria involved in the fermentation process. Sugars (usually dextrose) are added as a food source for the bacteria during the curing process, although it tends not to be added to horse meat because of the latter's naturally high levels of glycogen. Lactic acid is produced by the bacteria as a waste product, lowering the pH and coagulating and lowering the water-holding capacity of the meat. The acid produced by the bacteria makes the meat an inhospitable environment for other, pathogenic bacteria and imparts a tangy flavor that distinguishes salami from machine-dried pork. The flavor of a salami relies just as much on how these bacteria are cultivated as it does on quality and variety of other ingredients. Originally, the bacteria were introduced into the meat mixture with wine, which contains other types of beneficial bacteria; now, starter cultures are used. The whole process takes about 36 weeks, although some age it more for additional taste, and some can cut it down to about 24 weeks for a sweeter taste.

The drying and curing process is determined by the climate of the curing environment and the size and style of casing. After fermentation, the sausage has to be dried. This changes the casings from being water-permeable to being reasonably airtight. A white covering of either mold or flour helps prevent the photo-oxidation of the meat and rancidity in the fat.

Nitrates or nitrites are added to provide the cured meat color and inhibit growth of harmful bacteria from the genus Clostridium. Salt, acidity, nitrate/nitrite levels and dryness of the fully cured salami combine to make the uncooked meat safe to consume.

It is important that high quality, fresh ingredients are used; otherwise, deadly microrganisms and toxins can develop.