Fondue
Not to be confused with fondant. 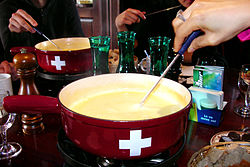 Dipping a cheese fondue with a long-stemmed fork

Fondue is a Swiss and French dish of melted cheese served in a communal pot (caquelon) over a spirit lamp (rechaud), and eaten by dipping long-stemmed forks with bread into the cheese. It was promoted as a Swiss national dish by the Swiss Cheese Union in the 1930s and became popular in North America in the 1960s.

The word fondue is the feminine passive past participle of the French verb fondre ('to melt') used as a noun, probably influenced by a Franco-Provençal word.[1] It is first attested in French in 1735, in Vincent la Chapelle's Cuisinier moderne,[2] and in English in 1878.[3]

The earliest known recipe for cheese fondue as we know it today comes from a 1699 book published in Zurich, under the name "Käss mit Wein zu kochen" 'to cook cheese with wine'.[4] It calls for grated or cut-up cheese to be melted with wine, and for bread to be dipped in it.

However, the name 'cheese fondue', until the late 19th century, referred to a preparation including eggs and cheese, as in la Chapelle's 1735 Fonduë de Fromage, aux Truffes Fraiches[2] and Brillat-Savarin's 1834 recipe;[5] it was something between scrambled eggs with cheese and a cheese soufflé.[6] Variations included cream ('à la genevoise') and truffles ('à la piémontaise') in addition to eggs; and also what we now call 'raclette' ('fondue valaisanne').[7]

The first known recipe for the modern cheese fondue under that name, with cheese and wine but no eggs, was published in 1875, and was already presented as a Swiss national dish.[8] Despite its modern associations with rustic mountain life, it was a town-dweller's dish from the lowlands of western, French-speaking, Switzerland: rich cheese like Gruyère was a valuable export item which peasants could not afford to eat.[9][10]

The introduction of cornstarch ("Maïzena") to Switzerland in 1905 made it easier to make a smooth and stable emulsion of the wine and cheese, and probably contributed to the success of fondue.[11]

The dish became popular in the United States through the late 1960s and early 1970s. In the meantime, fondue continued to be promoted aggressively in Switzerland, with slogans like "La fondue crée la bonne humeur" 'fondue creates a good mood' and (1981) "Fondue isch guet und git e gueti Luune" 'fondue is good and creates a good mood'--abbreviated as "figugegl".[13]

The extension of the name 'fondue' to other dishes served in a communal hot pot dates to 1950s New York. Konrad Egli, a Swiss restaurateur who had popularized cheese fondue, introduced fondue bourguignonne at his Chalet Suisse restaurant in 1956. Then in the mid 1960s, he invented chocolate fondue as part of a promotion for Toblerone chocolate.[14] A sort of chocolate mousse was also sometimes called 'chocolate fondue'.[15] 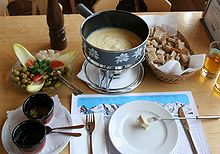 A full cheese fondue set in Switzerland. Apart from pieces of bread to dip into the melted cheese, there are side servings of kirsch, raw garlic, pickled gherkins, onions and olives.

Cheese fondue consists of a blend of cheeses, wine and seasoning. To prepare the caquelon it is first rubbed with a cut garlic clove. White wine, cheese, and often kirsch are added and stirred until melted. A small amount of cornstarch or other starch is added to prevent separation. The mixture is stirred continuously as it heats in the caquelon.

When it is ready, diners dip cubes of bread speared on a fondue fork into the mixture.

A cheese fondue mixture should be held at a temperature warm enough to keep the fondue smooth and liquid but not so hot as to allow any burning. If this temperature is held until the fondue is finished there will be a thin crust of toasted (not burnt) cheese at the bottom of the caquelon. This is called la religieuse (French for the nun). It has the texture of a thin cracker and is almost always lifted out and eaten.

Refrigerated fondue blends are sold in most Swiss supermarkets and need little more than melting in the caquelon. Individual portions heatable in a microwave oven are also sold.

A fondue bourguignonne: At top is a pot of hot oil for quickly cooking the meat, at middle a caquelon for a further cheese fondue and at bottom more sauces for dipping.

Slices of fruit or pastry are dipped in a caquelon of melted chocolate. Other types of dessert fondues can include coconut, honey, caramel and marshmallow.

A tradition says that if a man loses his bread in the pot, he buys drinks all around, and if a woman does, she must kiss her neighbors.[14]

Most writers recommend that each morsel be put in the pot only once (no double-dipping) and that the dipping fork be used only to transport the food from the pot to one's plate, not to eat.[17]