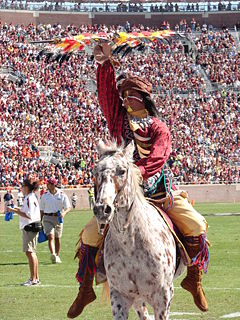 Chief Osceola and Renegade are the official symbols of the Florida State University Seminoles. During home football games at Florida State, Chief Osceola, portraying the Seminole leader Osceola, charges down the field at Bobby Bowden Field at Doak Campbell Stadium riding an appaloosa horse named Renegade, and hurls a burning spear at midfield to begin every home game.

Prior to the introduction of Osceola and Renegade, the Florida State Seminoles used several different Native American-themed mascots. The first was Sammy Seminole, introduced at the FSU Pow Wow in 1958 for football games. This mascot was portrayed by a white male member of the gymnastics or circus programs, who performed wild stunts in garish faux-Native American garb. The gymnastics program's sponsorship of Sammy Seminole ended in 1968, but the character was quickly reintroduced.[1][2]

In the late 1960s Chief Fullabull emerged as a mascot during basketball games. Like Sammy Seminole he donned cartoonish Native American-themed outfits, and performed even more clownish stunts. Under protest from Native American groups the character's name was altered to Chief Wampumstompum, though this did nothing to assuage the concerns of protesters. The character was then replaced with a somewhat more traditionally dressed figure named Yahola, also known as the "spirit chief". All of these mascots were eventually retired, and officials decided to find a more respectful representative for the school's teams.[1][2]

Osceola and his horse Renegade were the brainchild of Tallahassee businessman and Florida State alumnus Bill Durham. Though he came up with the concept of a horseback-riding Seminole mascot as early as 1962, when he was voted into the school's homecoming court. He returned to the idea in 1977, and won the support of Ann Bowden, wife of head football coach Bobby Bowden, who helped make the dream a reality. Durham provided the costume as well as the horse, Renegade, while Bowden helped acquire the various permits necessary to allow a horse onto the field.[1][2]

Durham chose the original costume to be as authentic as possible, and he and his family remain in charge of selecting and training both the horse and rider. Students receive a scholarship for portraying Osceola, and are required to remain in character at all times and abide by a set of protocols when doing so. There is only one Osceola impersonator at a time; as of 2003, ten students had portrayed Osceola.[1][2] Since the 1980s Florida State University has forged a relationship with the Seminole Tribe of Florida, who have given the school their blessing to use the Seminole and Osceola imagery.[2]

While the usage of Native American-derived names and mascots is opposed by many Native Americans and supporters, Florida State's use of Seminole imagery is officially sanctioned by the Seminole Tribe of Florida, while for its part the Seminole Nation of Oklahoma does not oppose it. The traditional regalia worn by Chief Osceola and Renegade is designed by women of the Seminole tribe each year.[3]

Chief Osceola through the years