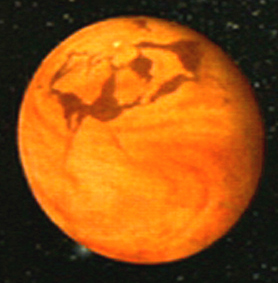 Arrakis, (الراقص ar-rāqiṣ, "the dancer") later Rakis (informally known as Dune) is a al featured in the "Dune" series of novels by ; it is the home of the ( wanderers) and later, the Imperial Capital under the Atreides Empire. Arrakis is the third planet orbiting the star Canopus, and it in turn is orbited by two moons, one of which has the image of the desert , , on it; the other moon possesses the image of a human hand.

Environment and the spice

:"Arrakis &mdash; Dune &mdash; Desert Planet."::&mdash; , "Dune"Arrakis is a desert planet with no natural precipitation, and is the only known source of the spice , which extends life and makes safe interstellar travel possible (and is therefore the most essential and valuable commodity in the universe). The planet has no surface water bodies, and giant sandworms (Shai-Hulud) and their immature forms of and are among the few fauna on the planet. Open canals called s are used "for carrying irrigation water under controlled conditions" through the desert. [Herbert, Frank. "Dune", "Terminology of the Imperium" (Qanat)] As indicated by large salt flats, Arrakis once had lakes and oceans.

In "", tells his twin sister Ghanima:

The sandtrout ... was introduced here from some other place. This was a wet planet then. They proliferated beyond the capability of existing ecosystems to deal with them. Sandtrout encysted the available free water, made this a desert planet ... and they did it to survive. In a planet sufficiently dry, they could move to their sandworm phase.

The non-canon "Dune Encyclopedia" (1984) theorizes that the depletion of the oceans (the primary result of which was ) was probably caused by the impact or near miss of a comet or other quasi-planetary body. This event caused the loss of much of the atmosphere of Arrakis, allowing most of the oxygen and water to escape into space. This is thought to have occurred approximately 50 million years before the Imperium's creation. This catastrophic loss of oxygen led to the extinction of nearly all native fauna and then therefore the .

The "Encyclopedia" also explains that one of the few forms to survive were tiny worms of the phylum Protochordata. One of these forms was "Shaihuludata", a genus of anaerobic burrowing worm that was the basal species from which the giant sandworms ("Geonemotodium arraknis" or "Shaihuludata gigantica") evolved. Rather than sandworm creating desert, it was desert that created sandworm. The mass extinction of all of its predators and competitors for food allowed the animal, in a manner somewhat analogous to the evolution of unique faunal forms on isolated Terran islands, to take the evolutionary path that would not only re-oxygenate the Arrakeen atmosphere, but also create the spice melange with all of its immense consequences for humanity.

Finally, the "Encyclopedia" notes that early in the history of Arrakis, the Imperium made several attempts to terraform the planet, which resulted in an abundance of Terran desert life on the planet (such as kangaroo mice and hawks), but failed to otherwise change the environment, as the local sandtrout "encyst" any open water on the planet.

Frank Herbert's own "" (1976), however, establishes that the sandtrout were brought to Arrakis from elsewhere. In the 2006 / novel "", Chapterhouse is turned into a desert planet by transplanting sandtrout onto the planet.

The wanderers, driven from planet to planet, eventually found their way to Arrakis, where they became the . They settled in artificial cave-like settlements known as es across the Arrakeen deserts. They also developed technology, allowing them to survive in the open desert. By harvesting melange, they were able to bribe the for privacy from observation and weather control in order to hide from the Imperium their true population and plans to terraform Arrakis. Much of this ecological activity took place in the unexplored southern latitudes of the planet. The best-known of the sietches is , home of and Muad'Dib's center of operations before victory in the put Muad'Dib on the Imperial throne.

According to the "" by and , it was a group of Zensunni wanderers escaping on the planet Poritrin who originally crashed on Dune in a prototype interstellar spacecraft several years prior to the creation of the .

During the events of "Dune", the grants Duke Leto Atreides I control of the lucrative spice harvesting operations of Arrakis, ousting the Atreides' longtime rivals, the Harkonnens. The Atreides rule is cut short by a murderous conspiracy crafted by the Harkonnens and Emperor himself. Leto's son (known by the Fremen as ) later leads a massive Fremen army to victory over the Emperor's soldier-fanatics, and by threatening the destruction of all spice production on Arrakis manages to depose Shaddam and ascend the throne in his place. With Emperor Paul worshipped as a god, Arrakis becomes the governmental and religious center of the Imperium.

Paul Muad'Dib continues the efforts to terraform Arrakis into a green world, a plan begun by the Fremen under the guidance of Imperial Planetologist and his son . The core of their plan is gradual water-collection from the Arrakeen atmosphere to form large reservoirs that would, eventually, become lakes and oceans. Much of this activity takes place in the unexplored southern latitudes of Arrakis.

By the time of "Children of Dune", (and then Leto II and Ghanima) realize that the ecological transformation of Arrakis is altering the sandworm cycle, which would eventually result in the end of all spice production. This at first seems a future to be avoided, but Leto II later uses this eventuality as part of his Golden Path to ultimately save humanity. Once he himself begins the transformation into a human/sandworm hybrid, he eradicates all desert on Arrakis except for a small area he makes his base of operations, and destroys all of the sandworms save one &mdash; himself.

After his death some 3,500 years later in "", Leto's worm-body is transformed back into sandtrout. Within only a few centuries, these sandtrout return Arrakis (thence called 'Rakis') to a desert.

In "", all life on Arrakis is destroyed (and the entire surface of the planet slagged into oblivion) by the in a failed attempt to eliminate the latest . The escape with a single sandworm, and drown it to revert the worm back into sandtrout. In "" the Bene Gesserit use these sandtrout to begin a new sandworm cycle on their homeworld of Chapterhouse, which is terraformed into desert for this purpose.

Finally, in "", the sandworms are revealed to be alive and well, having sensed the upper crust would be destroyed, and therefore burrowed even deeper, escaping the blast.

Arrakis' capital and largest city historically is Arrakeen. Arrakeen housed an ostentatious palace, which had been "the government mansion in the days of the Old Empire";