Helsinki Accords
For the set of principles on human experimentation, see Declaration of Helsinki. 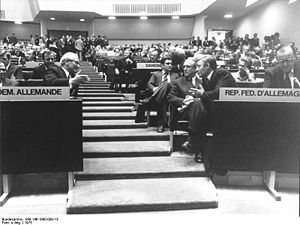 Erich Honecker (GDR, left) and Helmut Schmidt (FRG) in Conference on Security and Co-operation in Europe held in Helsinki 1975.

The Helsinki Final Act, Helsinki Accords or Helsinki Declaration was the final act of the Conference on Security and Co-operation in Europe held in Helsinki, Finland, during July and August 1,1975. Thirty-five states, including the USA, Canada, and all European states except Albania and Andorra, signed the declaration in an attempt to improve relations between the Communist bloc and the West.

The Act's "Declaration on Principles Guiding Relations between Participating States" (also known as "The Decalogue") enumerated the following 10 points:

The document was seen both as a significant step toward reducing Cold War tensions and as a major diplomatic boost for the Soviet Union at the time, due to its clauses on the inviolability of national borders and respect for territorial integrity, which were seen to consolidate the USSR's territorial gains in Eastern Europe following the Second World War. Considering objections from Canada, Spain, Ireland and other states, the Final Act simply stated that "frontiers" in Europe should be stable, but those borders could be changed by peaceful means.[1]:65 U.S. President Gerald Ford also reaffirmed that US non-recognition policy of the Baltic states' (Lithuania, Latvia and Estonia) forced incorporation into the Soviet Union had not changed.[2] Leaders of other NATO member states made similar statements.[1]:65

However, the civil rights portion of the agreement provided the basis for the work of the Moscow Helsinki Group, an independent non-governmental organization created to monitor compliance to the Helsinki Accords (which evolved into several regional committees, eventually forming the International Helsinki Federation and Human Rights Watch). While these provisions applied to all signatories, the focus of attention was on their application to the Soviet Union and its Warsaw Pact allies, including Bulgaria, Czechoslovakia, the German Democratic Republic (East Germany), Hungary, Poland, and Romania. Soviet propaganda presented the Final Act as a great triumph for Soviet diplomacy and for Brezhnev personally.[1]:65

According to the Cold War scholar John Lewis Gaddis in his book "The Cold War: A New History" (2005), "Leonid Brezhnev had looked forward, Anatoly Dobrynin recalls, to the 'publicity he would gain... when the Soviet public learned of the final settlement of the postwar boundaries for which they had sacrificed so much'... '[Instead, the Helsinki Accords] gradually became a manifesto of the dissident and liberal movement'... What this meant was that the people who lived under these systems — at least the more courageous — could claim official permission to say what they thought." 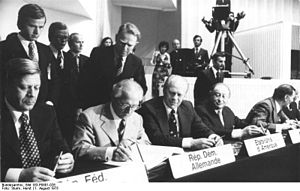 The Helsinki Accords served as the groundwork for the later Organization for Security and Cooperation in Europe (OSCE), established under the Paris Charter.

Heads of states, heads of governments and leaders of ruling parties