Montbéliard[1] (archaic German: Mömpelgard) is a city in the Doubs department in the Franche-Comté region in eastern France. It is one of the two subprefectures of the department.

Mentioned first in 985 as Mons Beliardae, it became a county of the Holy Roman Empire in the 11th century. In 1397 the town, known in German as Mömpelgard, passed by marriage of Henriette, heiress of county to Eberhard IV, Count of Württemberg, to the House of Württemberg . In 1524, ten years earlier than in Württemberg, duke Ulrich and reformer William Farel made Mömpelgard Protestant (specifically Lutheran). From 1598 to 1608, the architect Heinrich Schickhardt built several landmarks of the city, like St. Martin, a castle, a bridge, a college and several hotels.

After the French Revolution, it was briefly incorporated into the Rauracian Republic.[citation needed] In 1793 the town was annexed to France, which was confirmed in 1796 and by the German Mediatisation of 1806, when Württemberg was compensated with other areas, and became a kingdom.

As a consequence of the former rule under the dukes of Württemberg, it has been for centuries one of the few Protestant (specifically Lutheran) enclaves in France. The Württemberg coat of arms from 1495 represents Montbéliard as two jumping fishes on a red field.[2]

The metropolitan area has a population of 302,000 (with the city of Belfort). 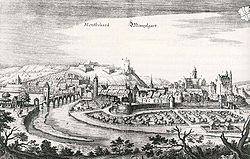 Montbéliard and the surrounding region constitute an important manufacturing center mainly based upon metallurgy and car industry.

The main manufacturing plant of the Peugeot automobile company is partly located in Montbéliard and has around 20,000 employees. In the area the automotive industry accounts for 34,000 employees in more than 100 companies. The Peugeot company's museum is located in the adjacent commune of Sochaux.

Montbéliard is the center of the 'Pays de Montbéliard', a metropolitan area of 132,000 inhabitants.

As the residence of the Counts of Montbéliard, the history of the castle is closely linked with the story of the families that reigned over the County for more than eight centuries. Built on a rocky promontory at the confluence of the Lizaine and Allan valleys, this stronghold, which already existed in the 10th century, was constantly transformed during the course of the centuries. Today, on the northern side of the edifice, one can admire the Henriette Tower (reconstructed by Countess Henriette in approximately 1424), the Frédéric Tower (1572 and 1595) and the main building dating back to the 18th century. The castle has become the Museum of the Castle of the Dukes of Württemberg, which includes a historical tour, an important archaeological department whose collections come mainly from excavations of local Gallo-Roman sites, the Cuvier natural history gallery and exhibits of paintings and sculptures of international renown. On the esplanade of the Castle, the Clock pavilion or Hôtel du Bailli (Bailli's quarters, also known as the gentlemen's quarters), built according to plans of the architect Schickhardt at the beginning of the 17th century, houses today the Academy of Music.

The Beurnier-Rossel mansion, located opposite St. Martin's church, near the Town Hall, stands as a witness to the life-style of the urban bourgeoisie during the 18h and 19th centuries. Today it houses the Museum of Art and History. The restored 18th century reception rooms on the first floor contain furniture, paintings, chandeliers and draperies which recreate the ambiance of a private residence. On the second floor, there is an exhibit of objects relating to the history of the town and local life (bibles, liturgical vessels, traditional headdresses etc.) and the collection of music boxes made by L'Épée is exhibited in the attic.

Saint Martin Protestant Church was built between 1601 and 1607 and is the work of Heinrich Schickhardt, the architect of Frederic 1st Prince of Montbéliard, in its purest form. It is also the oldest church in France dedicated to the Reformation form of worship.

Built between 1850 and 1875 on the Cardinal Mathieu's request to assert the Catholic reconquest over Lutheranism, Saint Maimboeuf Church dominates the town. Rich facade adornments and polychrome altarpiece. Worth seeing: its never-ending spire.

Montbeliard's most popular sports club is FCSM (Football Club Sochaux-Montbéliard). Founded in 1928, FC Sochaux-Montbéliard was a founder member of the French professional Football League. The club has played a record 62 seasons in Ligue 1, the most of any club in the French football league system. This consistancy contributed to the fact that FCSM, though a small club, has won all the possible national trophies.

Montbéliard is the birthplace of:

Montbéliard is twinned with: