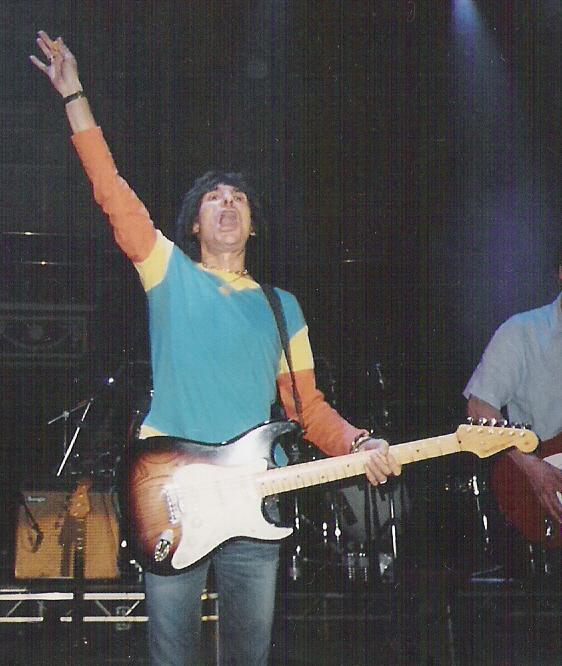 Ronald David "Ronnie" Wood (born 1 June 1947 in Hillingdon, London) is an English rock and best known as a member of Faces and .

Wood began his career as a professional musician in 1964 as a guitarist with The Birds, a band based in , West . A popular live act with a considerable fan base, The Birds released several singles in the mid-60s;

By 1967 the Birds had disbanded and Wood had joined the as a bassist. Along with vocalist , Wood did several tours with Beck, and recorded two albums: "Truth" in 1968 and "" in 1969. In between Jeff Beck Group projects Wood also worked with The Creation.

In the first half of the 1970s the Faces released four studio albums and were among the top-grossing live acts of the period.

In 1972, Wood and Faces bassist composed the soundtrack to the film "Mahoney's Last Stand"; the soundtrack, which was released as an LP in 1976, also features Faces bandmates and , along with contributions from and . Wood also performed with Townshend, Grech, , and at Clapton's Rainbow Concert in 1973.

Following 's departure from the Rolling Stones in December 1974, Wood participated in the band's March 1975 recording sessions for their forthcoming album "".

In the Rolling Stones, Wood specializes in playing , lap steel and , and contributes one half of the "ancient art of weaving," ' term for a style of interchange between guitarists that blurs the boundaries between rhythm and lead.

In 1975, Wood released his second solo album, ""; his third, "", came out in 1979. To promote it, Wood formed and toured with The New Barbarians, playing 20 concerts in Canada and the US in April/May and the Knebworth Festival in the UK in August.

Throughout the 1980s, Wood played as a member of the Rolling Stones; continued his solo career, releasing the album "1234" in 1981; painted; and collaborated with a number of other artists, including Prince, , , , and .

At the 1985 Concert in , Wood along with performed in the penultimate set with . During the performance of "Blowin' in the Wind", one of Dylan's guitar strings broke. Wood gave Dylan his guitar in order to keep the performance seamless, and played until a stagehand brought him a replacement.

In 1988 Wood opened "Woody's on the Beach" in Miami, a club featuring a house band headed by , hosting performances by local acts, friends of Wood's and occasionally Wood himself. The defunct hotel which housed the club allowed Wood to set up a VIP area upstairs, displaying Wood's artwork and providing private party areas. The club was popular, but was closed due to complaints from neighbours who found it too loud.

In 1990 Wood was made a fully-fledged partner in the Rolling Stones' financial organization.

In addition, Wood released his seventh solo album, "", in 1992; he toured to promote this album in North America and Japan. His appearance in 1993 with former bandmate Rod Stewart on "" resulted in a hit album entitled ""; the concert album that Wood released in 1993 from his own tour was called "".

Since 2000 Wood has continued to combine solo work with his Rolling Stones schedule. Following the 2001 release of his album "", Wood toured England and Ireland in 2001 and 2002 with his own group, . The band included members of his own family, Slash and . After the tour a called "" was released.

Wood toured with the Rolling Stones in 2002-03; in 2004 he performed several one-off concerts and guest appearances, including a number of appearances with Rod Stewart. Later in the year the two expressed intentions of finishing the studio work on a collaborative album to be entitled "You Strum and I'll Sing". In 2005, however, Wood was again busy with the Rolling Stones, recording their album "" and then embarking on a world tour that would continue through August 2007.

In 2005 Wood launched his own record company, Wooden Records, which has released recordings by his daughter Leah, The New Barbarians and others.

In November 2006, during a break in the Rolling Stones' tour, Wood played guitar on three tracks for British soul artist 's album "", released in 2007.

On 11 June 2008 Rod Stewart announced that he, Wood and the other surviving Faces are discussing a reunion, at least for one or two concerts.

Wood was born into a family of English "water gypsies" (river/canal operators, also sometimes called "bargees") and says that his generation was the first in the family to be born on dry land.

Wood has four children. Jesse is his son with his first wife, Krissy (nee Findlay), a former model to whom he was married from 1971 to 1978; Krissy died in 2005. In 1985 Wood married his second wife, (nee Howard), mother of his daughter Leah and son Tyrone; her son Jamie from a previous relationship completes the family. Also a former model, Jo Wood has developed a successful line of organic beauty products.

Wood is an accomplished artist. When he was a child his drawings were featured on the programme "Sketch Club"; he won one of that programme's competitions, an achievement he refers to as his "awakening to art".

Wood's paintings, drawings and prints frequently feature icons of popular culture and have been exhibited all over the world. Several of his paintings, including a work commissioned by , are displayed at London's Drury Lane Theatre.

To date, Wood has three books to his credit: a short collection of autobiographical anecdotes entitled "The Works", illustrated with Wood's artwork, co-authored by Bill German and published in 1988; a limited-edition art book entitled "Wood on Canvas: Every Picture Tells a Story", published in 1998; and his 2007 autobiography "Ronnie".

In addition to numerous Faces and Rolling Stones concert films, broadcasts and documentaries, Wood performed alongside , and many others in the finale of the documentary "", filmed in 1976.