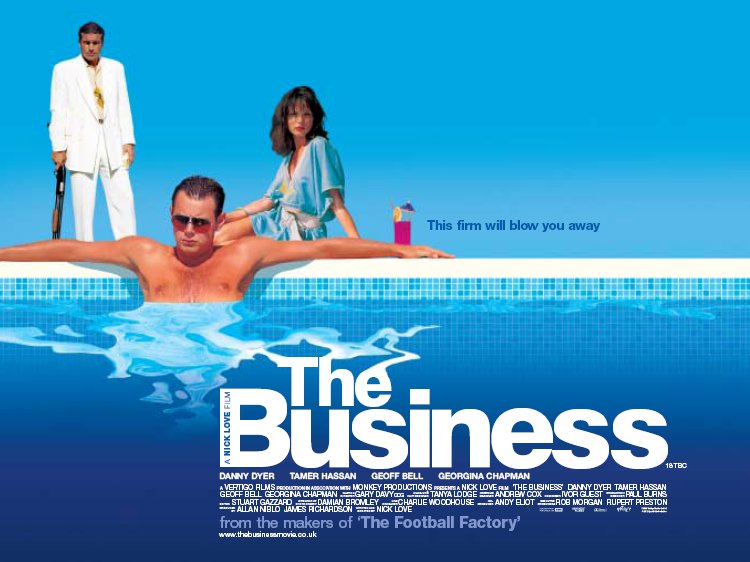 "The Business" is a 2005 British crime/ written and directed by , who performed the same duties on "The Football Factory". The film stars (Frankie), (Charlie), Geoff Bell (Sammy) and , and follows the rise and fall of Frankie's career within Charlie's and Sammy's drug importing business on the (aka the "") in during the 1980s.

The film is told from the viewpoint of -Frankie (Dyer), who narrates, in a particularly colourful fashion, his experiences following his murder of his mother's abusive boyfriend. To escape justice for his crime, he accepts a job delivering a bag to bar-owner and fellow criminal ex-pat "the Playboy" Charlie (Hassan) in Spain. Impressed by his honesty in not opening the bag, Charlie takes a liking to Frankie, introduces him to his business associates, including the psychotic Sammy (Bell), and invites him to remain in Spain and work as his driver. Deciding he prefers an exciting life of sun, drugs, women and crime, to being a nobody back in London, Frankie accepts and becomes involved in the business of smuggling across the from .

The film then follows the rise-and-fall pattern common to many gangster films, showing first the criminals living the high life as their cannabis trade is booming, and then the downfall as greed and jealousy (not helped by the obvious attraction between Frankie and Sammy's girl Carly (Chapman)) introduce rivalries between them, and eventually split them up. Charlie and Frankie decide to go into business alone, importing instead of cannabis, but this is the cause of the final catastrophe. Not only do they both become increasingly addicted to the drug itself, but also the , who had been happy to ignore the cannabis trade but had warned them not to import cocaine, discovers what they are doing and uses the weight of the law to shut them down.

A few years later (6 months before the 'real-time' narration), Frankie and Charlie are homeless thugs in need of a wash and reduced to stealing in order to survive. While organising a disappointing reunion party at Charlie's old bar, Frankie meets Carly again and decides to make one last deal. He invites Sammy in on a pick-up, but while both intend to betray the other, Carly has given Sammy a pistol with an empty clip. Sammy tries to shoot Frankie, who in turn beats him with a rock and escapes through a sewer as the Spanish police shoot Sammy to death. Frankie emerges from the sewer to meet Carly, who had masterminded the whole thing, finally getting his happy ending. But at the last minute, he realises he can't trust Carly, so he knocks her out and drives off into the sunset on his own.

The original music for the film was written by Ivor Guest, but most of the soundtrack consists of popular 80s chart hits, which give the film much of its atmosphere and flavour. The songs featured include:

The characters and events in this film may be a reference to the that occurred in the mid 1980s. Like in the real robbery, the gangland characters were forced to flee England to avoid arrest, and continued their business overseas, including the and other similar locations.