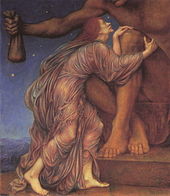 1909 painting The Worship of Mammon by Evelyn De Morgan. 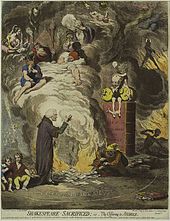 Shakespeare Sacrificed: Or the Offering to Avarice by James Gillray.

Greed is an excessive desire to possess wealth, goods, or abstract things of value with the intention to keep it for one's self. Greed is inappropriate expectation. However, greed is applied to a very excessive or rapacious desire and pursuit of wealth, status, and power.

As a secular psychological concept, greed is an inordinate desire to acquire or possess more than one needs or deserves. It is typically used to criticize those who seek excessive material wealth, although it may apply to the need to feel more excessively moral, social, or otherwise better than someone else.

St. Thomas Aquinas wrote that greed was "a sin against God, just as all mortal sins, in as much as man condemns things eternal for the sake of temporal things." In Dante's Purgatory, the avaracious penitents were bound and laid face down on the ground for having concentrated too much on earthly thoughts. ("Avarice" is more of a blanket term that can describe many other examples of greedy behavior. These include disloyalty, deliberate betrayal, or treason, especially for personal gain, for example through bribery.)

Ivan Boesky famously defended greed in a May 18, 1986, commencement address at the UC Berkeley's School of Business Administration, in which he said, "Greed is all right, by the way. I want you to know that. I think greed is healthy. You can be greedy and still feel good about yourself".[1] This speech inspired the 1987 film Wall Street, which features the famous line "greed, for lack of a better word, is good. Greed is right, greed works. Greed clarifies, cuts through, and captures the essence of the evolutionary spirit. Greed, in all of its forms; greed for life, for money, for love, knowledge has marked the upward surge of mankind."[2]

Meher Baba dictated that "Greed is a state of restlessness of the heart, and it consists mainly of craving for power and possessions. Possessions and power are sought for the fulfillment of desires. Man is only partially satisfied in his attempt to have the fulfillment of his desires, and this partial satisfaction fans and increases the flame of craving instead of extinguishing it. Thus greed always finds an endless field of conquest and leaves the man endlessly dissatisfied. The chief expressions of greed are related to the emotional part of man."[3]

Scavenging and hoarding of materials or objects, theft and robbery, especially by means of violence, trickery, or manipulation of authority are all actions that may be inspired by greed. Such misdeeds can include simony, where one profits from soliciting goods within the actual confines of a church. A well-known example of greed is the pirate Hendrick Lucifer, who fought for hours to acquire Cuban gold, becoming mortally wounded in the process. He died of his wounds hours after having transferred the booty to his ship.[4]