Quartz
This article is about the mineral. For other uses, see Quartz (disambiguation).

Quartz is the second-most-abundant mineral in the Earth's continental crust, after feldspar. It is made up of a continuous framework of SiO4 silicon–oxygen tetrahedra, with each oxygen being shared between two tetrahedra, giving an overall formula SiO2. There are many different varieties of quartz, several of which are semi-precious gemstones. Especially in Europe and the Middle East, varieties of quartz have been since antiquity the most commonly used minerals in the making of jewelry and hardstone carvings.

Quartz belongs to the trigonal crystal system. The ideal crystal shape is a six-sided prism terminating with six-sided pyramids at each end. In nature quartz crystals are often twinned, distorted, or so intergrown with adjacent crystals of quartz or other minerals as to only show part of this shape, or to lack obvious crystal faces altogether and appear massive. Well-formed crystals typically form in a 'bed' that has unconstrained growth into a void, but because the crystals must be attached at the other end to a matrix, only one termination pyramid is present. There are exceptions as doubly terminated crystals do occur. An occurrence in Herkimer County, New York is noted for these Herkimer diamonds with terminations at both ends. A quartz geode is such a situation where the void is approximately spherical in shape, lined with a bed of crystals pointing inward.

α-quartz crystallizes in the trigonal crystal system, space group P3121 or P3221. β-quartz belongs to the hexagonal system, space group P6221 or P6421.[6] These space groups are truly chiral (they each belong to the 11 enantiomorphous pairs). Both α-quartz and β-quartz are examples of chiral crystal structures composed of achiral building blocks (SiO4 tetrahedra in the present case). The transformation between α- and β-quartz only involves a comparatively minor rotation of the tetrahedra with respect to one another, without change in the way they are linked, this process is called the quartz inversion.

Quartz is an essential constituent of granite and other felsic igneous rocks. It is very common in sedimentary rocks such as sandstone and shale and is also present in variable amounts as an accessory mineral in most carbonate rocks. It is also a common constituent of schist, gneiss, quartzite and other metamorphic rocks. Because of its resistance to weathering it is very common in stream sediments and in residual soils. Quartz, therefore, occupies the lowest potential to weather in the Goldich dissolution series.

Quartz occurs in hydrothermal veins as gangue along with ore minerals. Large crystals of quartz are found in pegmatites. Well-formed crystals may reach several meters in length and weigh as much as 1,400 pounds (640 kg).[7]

Naturally occurring quartz crystals of extremely high purity, necessary for the crucibles and other equipment used for growing silicon wafers in the semiconductor industry, are expensive and rare. A major mining location for high purity quartz is the Spruce Pine Gem Mine in Spruce Pine, North Carolina, United States.[8]

Most quartz used in microelectronics is produced synthetically. Large, flawless and untwinned crystals are produced in an autoclave via the hydrothermal process. The process involves treating crushed natural quartz with hot aqueous solution of a base such as sodium hydroxide. The hydroxide serves as a "mineralizer", i.e. it helps dissolve the "nutrient" quartz. High temperatures are required, often around 675 °C. The dissolved quartz then recrystallizes at a seed crystal at slightly lower temperatures. Approximately 200 tons of quartz were produced in the US in 2005; large synthesis facilities exist throughout the world. Synthetic quartz is often evaluated on the basis of its Q factor, a measure of its piezoelectric response and an indicator of the purity of the crystal.[9] 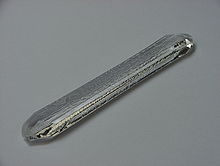 A synthetic silicon dioxide crystal grown by the hydrothermal method, about 19 cm long and weighing about 127 grams

Quartz is the source of many silicon compounds such as silicones (e.g. high performance polymers), silicon (e.g. microelectronics), and many other compounds of commercial importance. Quartz in the form of sand is reduced by carbothermic reaction as a first step in these energy-intensive processes.

Owing to its high thermal and chemical stability and abundance, quartz is widely used many large-scale applications related to abrasives, foundry materials, ceramics, and cements.[9]

Citrine is a variety of quartz whose color ranges from a pale yellow to brown. Natural citrines are rare; most commercial citrines are heat-treated amethyst. Citrine contains traces of Fe3+ and is rarely found naturally. The name is derived from Latin citrina which means "yellow".[13]

Rose quartz is a type of quartz which exhibits a pale pink to rose red hue. The color is usually considered as due to trace amounts of titanium, iron, or manganese, in the massive material. Some types of quartz contain microscopic rutile needles which produces an asterism in transmitted light. Recent X-ray diffraction studies suggest that the color is due to thin microscopic fibers of possibly dumortierite within the massive quartz.[14]

In crystal form (rarely found) it is called pink quartz and its color is thought to be caused by trace amounts of phosphate or aluminium. The color in crystals is apparently photosensitive and subject to fading. The first crystals were found in a pegmatite found near Rumford, Maine, USA, but most crystals on the market come from Minas Gerais, Brazil.[15]

Amethyst is a form of quartz that ranges from a bright to dark or dull purple color.

Smoky quartz is a gray, translucent version of quartz. It ranges in clarity from almost complete transparency to a brownish-gray crystal that is almost opaque.

Milky quartz may be the most common variety of crystalline quartz and can be found almost anywhere. The white color may be caused by minute fluid inclusions of gas, liquid, or both, trapped during the crystal formation. The cloudiness caused by the inclusions effectively bars its use in most optical and quality gemstone applications.[16]

The cryptocrystalline varieties are either translucent or mostly opaque, while the transparent varieties tend to be macrocrystalline. Chalcedony is a cryptocrystalline form of silica consisting of fine intergrowths of both quartz, and its monoclinic polymorph moganite.[17] Other opaque gemstone varieties of quartz, or mixed rocks including quartz, often including contrasting bands or patterns of color, are agate, onyx, carnelian, and jasper.

Varieties (according to microstructure)

Not all varieties of quartz are naturally occurring. Prasiolite, an olive colored material, is produced by heat treatment; natural prasiolite has also been observed in Lower Silesia in Poland. Although citrine occurs naturally, the majority is the result of heat-treated amethyst. Carnelian is widely heat-treated to deepen its color.

Quarz (help·info),[19] which is of Slavic origin (Czech miners called it křemen). Other sources attribute the word's origin to the Saxon word Querkluftertz, meaning cross-vein ore.[20]

Quartz is the most common material identified as the mystical substance maban in Australian Aboriginal mythology. It is found regularly in passage tomb cemeteries in Europe in a burial context, such as Newgrange or Carrowmore in the Republic of Ireland. The Irish word for quartz is grian cloch, which means 'stone of the sun'. Quartz was also used in Prehistoric Ireland, as well as many other countries, for stone tools; both vein quartz and rock crystal were knapped as part of the lithic technology of the prehistoric peoples.[21]

Roman naturalist Pliny the Elder believed quartz to be water ice, permanently frozen after great lengths of time. (The word "crystal" comes from the Greek word κρύσταλλος, "ice".) He supported this idea by saying that quartz is found near glaciers in the Alps, but not on volcanic mountains, and that large quartz crystals were fashioned into spheres to cool the hands. He also knew of the ability of quartz to split light into a spectrum. This idea persisted until at least the 17th century.

In the 17th century, Nicolas Steno's study of quartz paved the way for modern crystallography. He discovered that no matter how distorted a quartz crystal, the long prism faces always made a perfect 60° angle.

Charles B. Sawyer invented the commercial quartz crystal manufacturing process in Cleveland, Ohio, United States. This initiated the transition from mined and cut quartz for electrical appliances to manufactured quartz.