Network analyzer (electrical)
Not to be confused with packet analyzer or telecom network protocol analyzer.

The two main types of network analyzers are

A VNA may also be called a gain-phase meter or an Automatic Network Analyzer. An SNA is functionally identical to a spectrum analyzer in combination with a tracking generator. As of 2007[update], VNAs are the most common type of network analyzers, and so references to an unqualified “network analyzer” most often mean a VNA. The three biggest VNA manufacturers are Agilent, Anritsu, and Rohde & Schwarz.

A new category of network analyzer is the Microwave Transition Analyzer (MTA) or Large Signal Network Analyzer (LSNA), which measure both amplitude and phase of the fundamental and harmonics. The MTA was commercialized before the LSNA, but was lacking some of the user-friendly calibration features now available with the LSNA. 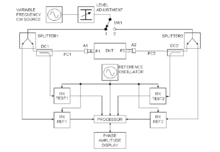 The basic parts of a vector network analyzer

The basic architecture of a network analyzer involves a signal generator, a test set, and one or more receivers. In some setups, these units are distinct instruments.

The test set takes the signal generator output and routes it to the device under test, and it routes the signal to be measured to the receivers.

Some microwave test sets include the front end mixers for the receivers (e.g., test sets for HP 8510).

The receivers make the measurements. A network analyzer will have one or more receivers connected to its test ports. The reference test port is usually lableled R, and the primary test ports are A, B, C,.... Some analyzers will dedicate a separate receiver to each test port, but others share one or two receivers among the ports. The R receiver may be less sensitive than the receivers used on the test ports.

For the VNA, the receiver measures both the magnitude and the phase of the signal. It needs a reference channel (R) to determine the phase, so a VNA needs at least two receivers. The usual method down converts the reference and test channels to make the measurements at a lower frequency. The phase may be measured with a quadrature detector. A VNA requires at least two receivers, but some will have three or four receivers to permit simultaneous measurement of different parameters.

There are some VNA architectures (six-port) that infer phase and magnitude from just power measurements.

The accuracy and repeatability of measurements can be improved with calibration. Calibration involves measuring known standards and using those measurements to compensate for systematic errors. After making these measurements, the network analyzer can compute some correction values to produce the expected answer. For answers that are supposed to be zero, the analyzer can subtract the residual. For non-zero values, the analyzer could calculate complex factors that will compensate for both phase and amplitude errors. Calibrations can be simple (such as compensating for transmission line length) or involved methods that compensate for losses, mismatches, and feedthroughs.

Using ideal shorts, opens, and loads makes calibration easy, but ideal standards are difficult to make. Modern network analyzers will account for the imperfections in the standards. (Agilent 2006)

From 1929 [3] to the late 1960s, large alternating current power systems were modelled and studied on AC network analyzers ( or Transient network analyzers). These were an outgrowth of the DC calculating boards used in the very earliest power system analysis. These systems were essentially models of the power system, with generators, transmission lines, and loads represented by miniature electrical components with scale values in proportion to the modeled system.[4] Model components were interconnected with flexible cords to represent the schematic of the modelled system. To reduce the size of the model components, the network analyzer was energized at a higher frequency than the 50 Hz or 60 Hz utility frequency, and model circuits were energized at relatively low voltages to allow for safe measurement with adequate precision. Typically, results accurate to around 2% of measurement could be obtained. [5]

AC network analyzers were much used for power flow studies, short circuit calculations, and system stability studies, but were ultimately replaced by numerical solutions running on digital computers. While the analyzers could provide real-time simulation of events, with no concerns about numeric stability of algorithms, the analyzers were costly, inflexible, and limited in the number of busses and lines that could be simmulated. [6] Since the multiple elements of the AC network analyzer formed a powerful analog computer, occasionally problems in physics and chemistry were modelled (by such researchers as Gabriel Kron of General Electric), during the period up to the late 1940s prior to the ready availability of general-purpose digital computers.[7]