Lake Maracaibo acts as a major shipping route to the ports of Maracaibo and Cabimas. The surrounding Maracaibo Basin contains large reserves of crude oil, making the lake a major profit center for Venezuela.[6] A dredged channel gives oceangoing vessels access to the bay. The General Rafael Urdaneta Bridge (8.7 km long; completed 1962), spanning the bay's outlet, is one of the longest bridges in the world.

The lake is also the location of Catatumbo lightning. 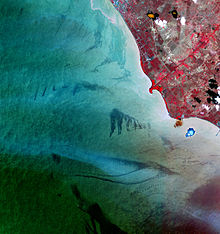 Oil slicks on the lake.

The first known settlements on the bay were those of the Goajiros, who still are present in large numbers, but have re-settled in the western boundary area with Colombia. The first European to discover the bay was Alonso de Ojeda on August 24, 1499, on a voyage with Amerigo Vespucci (the same one for which the American continents were named).

Legend has it that upon entering the lake, Ojeda's expedition found groups of indigenous huts, built over stilts on water ("palafitos" in Spanish), and interconnected by boardwalks on stilts, with each other and with the lake shore. The stilt houses reminded Vespucci of the city of Venice, (Italian: Venezia), so he named the region "Venezuela,"[7] meaning "little Venice" in Italian. The word has the same meaning in Spanish, where the suffix -uela is used as a diminutive term (e.g., plaza / plazuela, cazo / cazuela); thus, the term's original sense would have been that of a "little Venice".[8] (Examples of palafitos can still be found in "Santa Rosa", an area in the city of Maracaibo.)

Although the Vespucci story remains the most popular and accepted version of the origin of the country's name, a different reason for the name comes up in the account of Martín Fernández de Enciso, a member of the Vespucci and Ojeda crew. In his work Summa de Geografía, he states that they found an indigenous population who called themselves the "Veneciuela," which suggests that the name "Venezuela" may have evolved from the native word.[9]

The port town of Maracaibo was founded in 1529 on the western side. In July 1821, the bay was the site of the Battle of Lake Maracaibo, an important battle in the Venezuelan War of Independence. Oil production began in the surrounding basin in 1914, with wells drilled by Bataafsche Petroleum Maatschappij, a predecessor of Royal Dutch Shell.

On April 6, 1964, at 11:45 pm, the supertanker Esso Maracaibo, loaded with 236,000 barrels (37,500 m3) of crude oil, suffered a major electrical failure, so that control of steering was lost. Thus it collided with pier #31 of the two-year-old General Rafael Urdaneta Bridge across the mouth of the lake. A 259 metre section of the bridge roadway fell into the water with a portion coming to rest across the tanker just a few feet from the ship's superstructure. Fortunately, no oil spill occurred, and there were no deaths or serious injuries on the tanker, but seven motorists and passengers in vehicles crossing the bridge were killed.

Due to its large extension and its geological conformation some Islands are of considerable size and populated with fisherman, commercial and recreational purposes.

The majority of this islands are located in the Almirante Padilla municipality, including:

Several settlements built out on stilts over the lake – palafitos – still exist in the south and south-west, notably at Lagunetas.

Due to the massive volume of oil removed in the Maracaibo Basin, some oil-producing areas adjacent to Lake Maracaibo have sunk, changing the geography of the region. The original concessions to oil companies purposefully assigned swamps and wetlands along the East border of the lakes for facilities. This required the oil companies to build dikes and drain the land in order to build their facilities, Dutch Shell takes credit for some of the most enduring dike systems. Since the nationalization maintenance of the dike systems has fallen upon the Venezuelan government to sub-sea-level areas like Tía Juana, Lagunillas, and Bachaquero from encroachment by the waters. Cumulative subsidence is as much as 5 meters, and it continues at a rate of up to 20 cm/yr at some locations inland and typically 5 cm/yr along the coast. Many consider the dike to be a disaster in waiting, with the potential of an earthquake causing soil liquefaction and submerging a large population. A program of mitigative measures to address the seismic risk was begun in 1988. Ongoing maintenance and improvements to the dike will be needed, as it continues to subside by as much as 7 cm per year.[10] 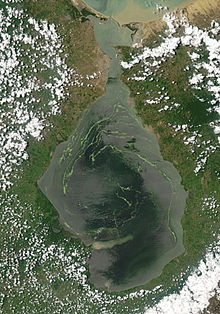 Green swirls on the lake are duckweed.

As of June 18, 2004, a large portion (18%) of the surface of Lake Maracaibo is covered by duckweed specifically Lemna. Although efforts to remove the plant have been underway, the plant – which can double its size every 48 hours – covers over 130 million cubic metres of the lake. The only way to remove the weed is to pull it out of the lake physically – no chemical or biological method has been found to treat the weed. The government has been spending $2 million monthly to clean the lake, and the state-run oil company Petroleos de Venezuela S.A. has created a $750 million cleanup fund. Current efforts are barely keeping up with the growth of the plant. The removal process has proven to be particularly difficult in the center of the lake where a specially equipped ship may be needed to pull the weed off the lake.

There is some mystery as to how the plant came to reside in the waters of Lake Maracaibo. According to scientists from the Institute for the Conservation of Lake Maracaibo (ICLAM), one of the government organizations charged with the care of Lake Maracaibo, the weed is probably native to the lake, but few studies have been conducted to confirm that suspicion. The prodigious growth of the freshwater marine plant is likely a self-purification mechanism. Others disagree, believing the type of duckweed to be native to Florida and Texas and thus the infestation is a result of its having been transported by ship.

Another point of uncertainty is why the scale of the outbreak is so great. Maracaibo is fed by both salt water from the Caribbean and fresh water from numerous rivers. The lighter fresh water floats on top of the heavier salt water, which forms a dense layer on the bottom. This set-up traps nutrients that have settled on the floor of the lake. In the spring of 2004, heavy rains disrupted the usual pattern. The sudden influx of fresh water stirred the layers, allowing nutrients to float to the top, where duckweed and other plants reside. These nutrients may have triggered the duckweed's rapid expansion. Additional sources of nutrients include untreated sewage discharge and fertilizers and other industrial waste flowing into the lake through rivers (97 percent of the country's raw sewage is discharged without treatment into the environment). Furthermore, chemicals used to clean up oil spills may have contributed to the duckweed problem. The lake basin hosts Venezuela's largest oil fields, and high concentrations of biodegradable dispersants that contain phosphates and polyaspartic acid – a chemical used to increase nutrient uptake in crops – have been found, a veritable feast for the plants. Scientists at ICLAM disagree, saying that dispersants have been banned from the lake for years and, even if they were present, could not contain enough nutrients to support the current duckweed population.

Duckweed is not toxic to fish, but some scientists are concerned that it could suck oxygen out of the lake as it decays, asphyxiating large numbers of fish. Though officials say the weed hasn't harmed fish yet, it is putting a dent in the local fishing industry. The plant clogs the motors of small boats, making it impossible for fishers to launch their vessels. Duckweed further threatens the local ecosystem by choking out other plants as it shades large portions of the lake. In certain conditions, the weed may concentrate heavy metals and bacteria such as salmonella and Vibrio cholerae, the bacterium that causes cholera. Despite these problems, the weed may yet have some positive use; duckweed can be treated to be fed to poultry or to make paper.