The Atlantic or the European Sturgeon (Acipenser sturio), also known as the baltic sturgeon or common sturgeon, is a species of sturgeon found on most coasts of Europe. It is currently a critically endangered species.

The wedge-shaped head of this sturgeon ends in a long point. There are many sensitive barbels on the facial area. The dorsal fins are located very far back on the body. Five longitudinal lines of large osseous plates are found on the body of the fish. The belly is yellow and the back is brownish-grey. 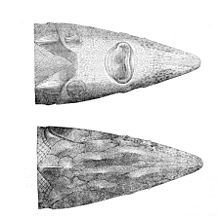 They are found on the coasts of Europe, except the Black Sea and have even been known to cross the Atlantic Ocean to the coasts of North America. Like many other sturgeons, they spawn in the rivers off the coast.

Also like other sturgeons, they eat shells and crustaceans which they find with their barbels.

At the beginning of the 19th century, these fish were used extensively to produce caviar, but have been a protected species in Europe since 1982.