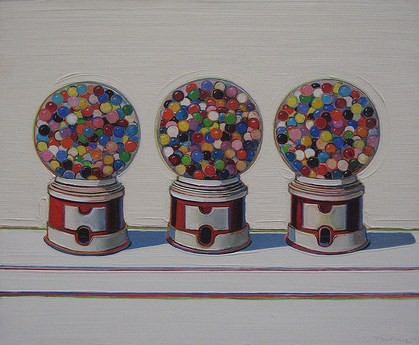 Wayne Thiebaud (born , ) is an American painter whose most famous works are of s, pastries, s, s, s and s. His last name is pronounced "Tee-bo." He is associated with the movement because of his interest in objects of , however, his works, executed during the fifties and sixties, slightly predate the works of the classic pop artists. Thiebaud uses heavy and exaggerated colors to depict his subjects, and the well-defined shadows characteristic of advertisements are almost always included in his work.

Thiebaud was born to parents in Mesa, , U.S.A.. His family moved to Long Beach, when he was six months old. One summer during his high school years he apprenticed at the . The next summer he studied at a trade school. He earned a degree from in 1941. From 1938 to 1949, he worked as a cartoonist and designer in California and New York and served as an artist in the .

In 1950, at the age of thirty, he enrolled in Sacramento State where he earned a Master's Degree in 1952 and began teaching at . In 1960, he became assistant professor at the , where he remained through the 1970s and influenced numerous artist students. However, he did not have much following among Conceptualists because of his adherence to basically traditional disciplines, emphasis on hard work as a supplement to creativity, and love of realism. Occasionally, he still gives pro bono lectures at U.C. Davis.

On a leave of absence, he spent time in New York City where he became friends with and and was much influenced by these abstractionists as well as proto pop artists and . During this time, he began a series of very small paintings based on images of food displayed in windows, and he focused on their basic shapes.

Returning to California, he pursued this subject matter and style, isolating triangles, circles, squares, etc. He also co-founded the Artists Cooperative gallery, now Artists Contemporary Gallery, and other cooperatives including Pond Farm, having been exposed to the concept of cooperatives in New York.

In 1960 he had his first one-man show in at the Museum of Art and in at the Staempfli and Tanager galleries. These shows received little notice, but two years later, a 1962 Gallery exhibition in New York officially launched , bringing him national recognition although he disclaimed being anything other than a painter of illusionistic form.

In 1961 Thiebaud met and became friends with Allan Stone (1932-2006), the man who gave him his first "break" decades ago. Stone was Thiebaud's dealer until his (Stone's) death in 2006. Stone said of Thiebaud "I have had the pleasure of friendship with a complex and talented man, a terrific teacher and cook, the best raconteur in the west with a spin serve, and a great painter whose magical touch is exceeded only by his genuine modesty and humility. Thiebaud's dedication to painting and his pursuit of excellence inspire all who are lucky enough to come in contact with him. He is a very special man." The [http://www.allanstonegallery.com Allan Stone Gallery] is currently located in New York City and carries many other pop-artists artwork. Since Stone's death, Thiebaud's son Paul has taken over as his dealer. Paul Thiebaud has been a successful art dealer in his own right and has eponymous galleries in Manhattan and San Francisco.

In 1962 Thiebaud's work was included, along with , , , , , , and , in the historically important and ground-breaking "," curated by at the Pasadena Art Museum. This exhibition is historically considered one of the first exhibitions in America. These painters were part of a new movement, in a time of social unrest, which shocked America and the art world and changed art forever.

In 1963 he turned increasingly to figure painting, wooden and rigid with each detail sharply emphasized. In 1964 he made his first prints at , and has continued to make prints throughout his career. In 1967 his work was shown at the Biennale Internationale.

One of Thiebaud's successful students from Sacramento City College was renowned artist, (1937-2005) who went on to become a major influence in the direction of Indian art through his instruction at the in (1964-1969).

Thiebaud is best known for his paintings of objects found in s and s, such as pies and pastries. Many wonder if he spent time working in the food industry, and in fact he did. As a young man in Long Beach, he worked at a named "Mile High and Red Hot", where "Mile High" was and "Red Hot" was a .

He was associated with the painters because of his interest in objects of , however, his works, executed during the fifties and sixties, slightly predate the works of the classic pop artists, suggesting that Thiebaud may have had an influence on the movement. Thiebaud uses heavy and exaggerated colors to depict his subjects, and the well-defined shadows characteristic of advertisements are almost always included in his work.

In addition to pastries, Thiebaud has painted s, streetscapes, and popular characters such as . His recent paintings such as "Sunset Streets" (1985) and "Flatland River" (1997) are noted for their hyper realism, and are in some ways similar to 's work, who was fascinated with mundane scenes from everyday American life.

In his painting, he focuses on the commonplace in a way that suggests irony and objective distance from his subjects. He also makes a point of keeping an independent distance from the .

Thiebaud considers himself not an artist, but a painter. He is a voracious reader and is known for reading poetry to his students. His favorite poet is .