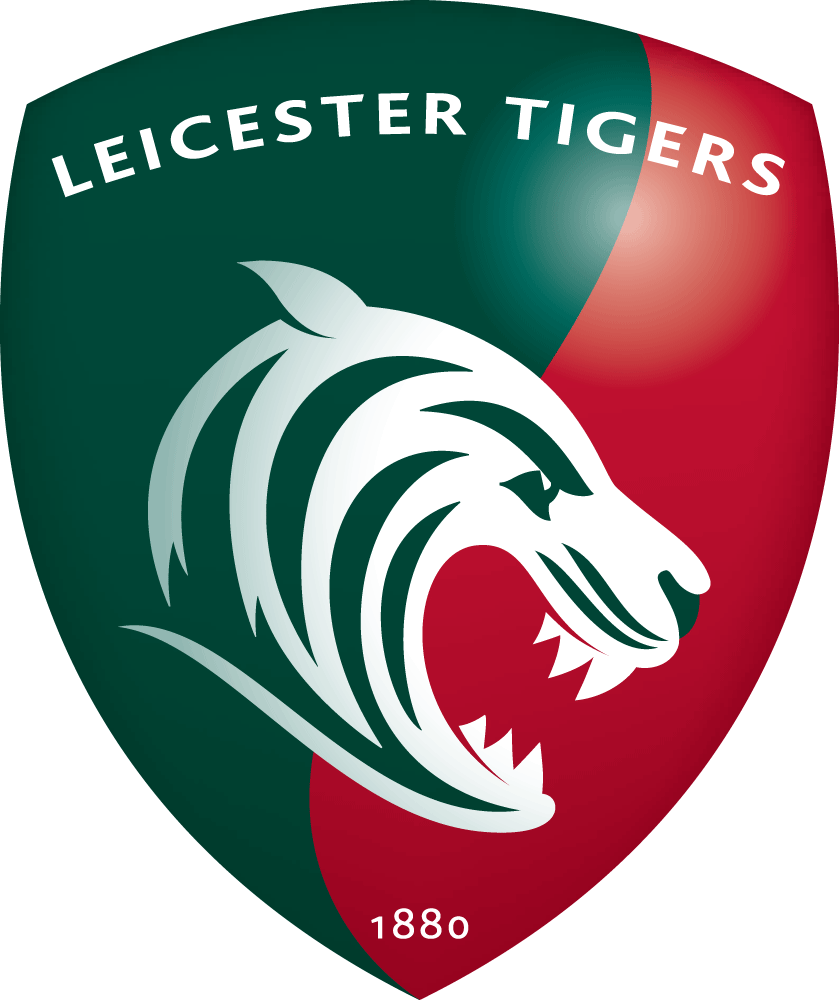 Leicester Football Club (nicknamed Leicester Tigers) is an English club that plays in the . The club has been the most successful English club of the professional era, winning the twice and the league five times under the captaincy of , all in the space of 7 years.

Leicester are one of only four teams never to have been relegated from the top division and have never finished a league season below 6th position. They are the only English side to have qualified to play in every in which English teams have participated. The club's turnover for 2006-07 was £15.2 million. [http://www.thisisleicestershire.co.uk/displayNode.jsp?nodeId=132950&command=displayContent&sourceNode=132730&contentPK=19294343&pNodeId=132443]

Leicester Football Club was formed in a meeting held in the city's George Hotel on August 1880 by the merger of three smaller teams: Leicester Societies AFC, Leicester Amateur FC and Leicester Alert. That October, the new club wore black for their first game against Moseley at the Belgrave Cricket and Cycle Ground.

It was not until five years or so later that the nickname "Tigers" was first used, the "Leicester Daily Post" reporting that "the Tiger stripes were keeping well together". The origin of the nickname is uncertain, but it may have come from , which received the nickname after serving in India. An alternative theory is that the team wore a brown and yellow striped shirt. In their early years, they were also known as "The Death or Glory Boys". The now-famous scarlet, green and white jerseys were not introduced until 1891, although these were in a vertical stripe formation until the distinctive hoops were first worn in September 1895.

In the 1926/27 season, Leicester started using letters to identify their forwards, expanding the practice by 1931/32 to the whole team.

With the arrival of in 1968, things began to improve significantly. He was a very progressive coach who demanded high standards of fitness and tactics. His unique style of coaching brought success on the pitch, and with that success came increased attendances.

Leicester started to grow as a club towards the end of the 1970s. At the start of the decade, the club had just 600-700 members and gates were less than 1,000. By 1980, the Tigers had reached their first cup final, and the club was on its way towards a substantial period of growth.

During 1970s the team played in front of a packed stadium during the annual Barbarians event (in contrast with the usual 750-2,000 spectators). This game still takes place each year; however, it is no longer played on Boxing Day since Leicester now play a league game near that date.

A first Twickenham final appearance ended in defeat by Gloucester in the in 1978, but the Tigers won the next three against Moseley (15-12), London Irish (21-9) and Gosforth (22-15). This meant they were allowed to keep the trophy. The fifth final was a loss to Bristol in 1983.

In August 1980, Leicester became the first English club to go on a tour in the southern hemisphere, where they played six games in Australia and Fiji to mark the club's centenary.

In the 1980s, the club still enjoyed the benefits of amateur rugby, with nights away and Easter tours, although off the pitch the Tigers were taking their first steps towards corporate sponsorship. When they beat Waterloo on the last day of the 1987/88 season, the Tigers became England’s first official champions.

The early 1990s saw the emergence of Leicester's renowned ABC Club, so called because of the letters the front row players wore on their backs, with Graham Rowntree, hooker Richard Cockerill and Darren Garforth.

Leicester began one of the greatest winning streaks of any team. This streak started when a young pack helped Leicester to defeat Harlequins 23-16 in the 1993 cup final. They were English champions again in 1995, won the Pilkington Cup in 1997 (9-3 against Sale) and were the first English team to get to the Heineken Cup final before losing to Brive in the same year. In the 1996 cup final, Tigers lost to Bath (which was just finishing its own great domination of English rugby) after gave a contentious penalty try to in the last minute which sealed their victory. After the match pushed over Lander landing himself a six month ban.

From 1999 to 2002, under the captaincy of and the management of Dean Richards, who became Director of Rugby for the club in February 1998, they won four consecutive Premiership titles and the first Zürich Championship play-offs, bringing their total of league championships to 6 — tied with Bath for most wins.

Leicester during this time had a very good home record; they went 57 games unbeaten at home in a period that stretched from to and included 52 successive wins. During these four seasons Leicester lost only 14 games out of the 92 they played.

In the , the club had seven representatives in the winning England squad: (captain), , , , , and . However whilst these players were away Leicester's form suffered and they were 11th in the league and dumped out of the Heineken cup in the group stages when they decided to sack Dean Richards.

In John Wells' first full season in charge of the team Leicester finished the regular season top of the league, also progressing to the semi-final of the Heineken cup before defeat to Toulouse at the . In Martin Johnson and Neil Back's last game for Leicester they lost the Premiership Final to Wasps. After this game John Wells left Leicester to take up a position in the RFU's coaching academy, eventually rising to England forwards coach.

In 2005-6, the Tigers finished second to the Sale Sharks in the league before losing to the same team in the Premiership final. They again proceeded to the knockout stages of the Heineken Cup, again they lost at the Walkers Stadium to Bath. In the new Anglo-Welsh Cup Leicester won their group but lost in the semi-finals to Wasps at the in , .

Over the summer of 2006, they added a number of promising forwards especially Jordan Crane, the Number 8, who arrived from Leeds Tykes with a good reputation following the in .

Leicester won their first piece of silverware for five years on 2007, beating the Ospreys 41-35 with tries from , Tom Croft, and to win the at . This was quickly repeated with success on at Twickenham with a 44-16 win over Gloucester. However Leicester failed to win an unprecedented treble, by losing the Final at Twickenham on to .

It was announced on that the current head coach would leave the club at the end of the season, to return to his native . [ [http://www.bbc.co.uk/leicester/content/articles/2006/12/28/pat_howard_leaving_feature.shtml Howard returns home] - BBC News, December 28th] . He was succeeded by the then-head coach of nrut|Argentina, after the . [ [http://news.bbc.co.uk/sport1/hi/rugby_union/my_club/leicester/6576815.stm Loffreda named as new Tigers boss] - BBC News, , ]

Leicester hold the record for the biggest wins in both the Heineken Cup (90-19 demolition of Glasgow in 1997), and the Guinness Premiership (83-10 defeat of Newcastle Falcons in 2005).

On June 08, Marcelo Loffreda was fired as coach of the Tigers after losing the Guinness Premiership Championship Final against London Wasps.

The club plays its home games at , the address of which is actually Aylestone Road. The ground was opened in 1892 and the first stands accommodated 1100 spectators. The Members' and Crumbie Stands were built after WW1. The Alliance and Leicester Stand was opened at the Welford Road end in 1995. The total ground capacity is currently 17,498 (2008-2009 season).

On , the club announced that it had entered into a 50-50 joint venture with the city's main football club, , to purchase City's current ground, . If the purchase had gone through, the Tigers would have surrendered their lease on Welford Road and moved into Walkers Stadium. [http://www.rugbyrugby.com/TOURNAMENTS/Zuric_Premiership/Tournament_News/story_40106.shtml] However, after several months of talks, the two clubs could not agree as to which side would have priority at Walkers Stadium, and they ended any groundshare plans in July 2005. [http://www.rugbyrugby.com/news/story_44750.shtml]

On the club announced plans that it was working with , who were involved in redeveloping Manchester United's Old Trafford stadium for a redevelopment plan which will raise the capacity of their Welford Road stadium from 16,815 to 25,000 by 2011.

On Leicester Tigers received planning consent for the £60million redevelopment of their Welford Road home.The first phase of the development would include space for 10,500 supporters in a new North Stand (Granby Halls side), taking capacity up from the present 17,498 to 23,500. After full renovation it will have a capacity of 30,000. [http://www.tigers.co.uk/29_10548.php]

In the last two seasons Leicester have finished in the playoffs of the Premiership, finishing first in 2004-5 and second in 2005-6. On both occasions they reached the final at Twickenham and lost — in 2005 to and in 2006 to .

On , Leicester defeated Bristol 26-14 to reach the Premiership playoff final for the third consecutive year, where they defeated Gloucester 44-16 at Twickenham to win their first ever title via the playoffs. [ [http://news.bbc.co.uk/sport1/hi/rugby_union/6649519.stm BBC SPORT | Rugby Union | Gloucester v Leicester - as it happened ] ] .

On , Leicester defeated Gloucester at to become the first team to win a Guinness Premiership semi-final playoff away from home.