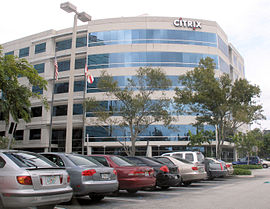 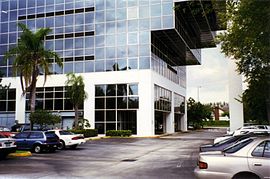 Citrix currently services around 230,000 organizations worldwide[3] and is based in Fort Lauderdale, Florida, in the South Florida metropolitan area, with subsidiary operations in California and Massachusetts, and additional development centers in Australia, India, and the United Kingdom.

Citrix was founded in Richardson, Texas in 1989 by former IBM developer Ed Iacobucci, with $3 million in funding.[5] Iacobucci quickly moved the company to Coral Springs, Florida since he lived there when he had worked at IBM.[5]

Citrix was originally named Citrus but changed its name after an existing company claimed trademark rights. The Citrix name is a portmanteau of Citrus and UNIX.

Many of the original founding members had participated in the IBM OS/2 project. Iacobucci's vision was to build OS/2 with multi-user support. IBM was not interested in this idea, so Iacobucci left. Iacobucci was offered a job at Microsoft as chief technical officer of its networking group but turned it down to start his own company.[5]

The company's first product was Citrix MULTIUSER, which was based on OS/2. Citrix licensed the OS/2 source code from Microsoft, bypassing IBM. Citrix hoped to capture part of the UNIX market by making it easy to deploy text-based OS/2 applications. The product failed to find a market. This was due in part to Microsoft declaring in 1991 that it was no longer going to support OS/2.[5]

Roger Roberts was appointed the CEO of Citrix in 1990. Roberts, a Texan, came from Texas Instruments.

From 1989 to 1995, the company did not turn a profit. In 1989 and 1990 there was no income at all. Between 1991 and 1993, Citrix received funding from both Intel and Microsoft as well as venture capitalists. Without the help of this funding, Citrix would not have survived.[5]

In 1993, Citrix purchased the product "Netware Access Server" from Novell. It was a remote access application built on DOS and Quarterdeck Expanded Memory Manager. It provided desktop and applications from the server to multiple users in a similar way Terminal Servers still do. Citrix developed the product further and released it as WinView. It became Citrix's first successful product.

Citrix Delivery Center, composed of XenDesktop, XenApp, XenServer and NetScaler, virtualizes servers, desktops and applications, centralizes them in the datacenter and delivers them as an on-demand service.[6]

Citrix XenApp is an on-demand application delivery solution that enables any Windows® application to be virtualized, centralized, and managed in the datacenter and instantly delivered as a service to users anywhere on any device.

XenServer is a virtual-machine monitor for x86, x86-64, Itanium and PowerPC 970 architectures. It allows several guest operating systems to execute on the same computer hardware at once, meaning a single computer can run several virtual desktops concurrently. From April 2009, Citrix has been offering its XenServer virtualization platform for free to any user for unlimited production deployment.[7]

In January 2010 Citrix introduced Citrix Receiver, the first universal client for virtual IT service delivery [REF]. The receiver allows tablet and smartphone users to access their virtual desktop and applications from tablet and smartphone devices.[8] Citrix Receiver is built upon the Independent Computing Architecture (ICA), a Citrix-designed proprietary protocol for an application server system. The protocol lays down a specification for passing data between server and clients, but is not bound to any one platform.

GoView allows users to record and share their desktop online.

The Citrix and Microsoft relationship is based upon a 20-year alliance, which began in 1989 when Citrix licensed the OS/2 source code.

Citrix obtained a source code license to Microsoft's Windows NT 3.51. In 1995, Citrix shipped a multiuser version of Windows NT with remote access, known as WinFrame. This product was a unique offering, targeting the needs of large enterprises.

During the development of WinFrame for Windows NT 4, Microsoft decided that it did not want to license Windows NT 4 source code to Citrix. Not only that, Microsoft threatened to build its own version of WinFrame. Citrix and Microsoft entered negotiations about how best to resolve this dilemma.[5][9] After negotiations, Microsoft agreed to license Citrix technology for Windows NT Server 4.0, resulting in Windows Terminal Server Edition.[10][11] Citrix agreed not to ship a competing product but retained the right to sell an extension to Microsoft's products, initially under the name MetaFrame. This relationship continued into the Windows 2000 Server and Windows Server 2003 eras, with Citrix offering Metaframe XP and Presentation Server. On February 11, 2008, Citrix changed the name of its Presentation Server product line to XenApp.

The core technology that Microsoft did not buy was the ICA protocol. Microsoft derived the work for RDP (T.share) protocol from NetMeeting, which originally derived from a deal with PictureTel (now known as Polycom).[12]

In January 2008, Citrix announced an expanded alliance with Microsoft to deliver a set of virtualization solutions to address the desktop and server virtualization markets to ensure broad interoperability between their technologies.[13]

In February 2009, Citrix extended its collaboration with Microsoft in the server virtualization market with “Project Encore”. This was heralded by a new product, Citrix Essentials, that offers advanced management for Microsoft Windows Server 2008 Hyper-V. Joint marketing, training and channel activities were conducted with Microsoft.[14]