The Mitsubishi F-2 is a multirole fighter manufactured by Mitsubishi Heavy Industries (MHI) and Lockheed Martin for the Japan Air Self-Defense Force, with a 60/40 split in manufacturing between Japan and the USA. Production started in 1996 and the first aircraft entered service in 2000. The first 76 aircraft entered service in 2008, with a total of 94 airframes under contract.[1] In FY2005, Ministry of Defense changed the category from Support Fighter to Fighter.

Work started in the FS-X program, and began in earnest with a memorandum of understanding between Japan and the United States. It would lead to a new fighter based on the General Dynamics (post 1993, Lockheed Martin) F-16 Fighting Falcon, and in particular the F-16 Agile Falcon proposal. Lockheed Martin was chosen as the major subcontractor to Mitsubishi Heavy Industries, and the two companies co-developed and co-produced the aircraft. Some of the early developmental works were actually done under General Dynamics, who sold its aircraft division to Lockheed Martin in 1993. It is essentially an execution of the F-16 Agile Falcon proposal: a late-1980s plan for an enlarged F-16 which was passed over by the U.S. in favor of an all-new fighter program (Joint Strike Fighter). The F-2 used the wing design of the F-16 Agile Falcon, but much of the electronics were further updated to 1990s standards. The overall concept of the enlarged F-16 by General Dynamics was intended as a cheap counter to the then emerging threat of Su-27/MiG-29.

In October 1987, Japan selected the F-16 as the basis of its new secondary fighter,[3] to replace the aging Mitsubishi F-1 and supplement its main air superiority fighter, the F-15J as well as the F-4EJ. The programme involved technology transfer from the USA to Japan, and responsibility for cost sharing was split 60% by Japan and 40% by USA.[4] Also during the 1980s, General Dynamics (who developed the F-16) had proposed its F-16 Agile Falcon to the USAF. While the US would pass over the design concept in favor of all-new types (F-22/JSF) and upgrades to its existing fleet, the enlarged F-16 would find a home in Japan.

The F-2 program was controversial, because the unit cost, which includes development costs, is roughly four times that of a Block 50/52 F-16, which does not include development costs. Inclusion of development costs distorts the incremental unit cost (this happens with most modern military aircraft), though even at the planned procurement levels, the price per aircraft was somewhat high. The initial plan of 141 F-2s would have reduced the unit cost by up to US$10 million per unit, not including reduced cost from mass production. As of 2008, 94 aircraft were planned.[1] Also controversial is the amounts claimed to be paid to American side as various licensing fees, although making use of the pre-existing technology was much cheaper than trying to develop it from scratch.

The Japanese may eventually make up to 94, at a cost of roughly US$ 110 million each in 2004 dollars. Much of the F-16 technology used in the F-2 was the subject of some political debate in the U.S. and Japan in the early 1990s. The technology transfers were authorized however, and the project proceeded.

The F-2's maiden flight was on 7 October 1995. Later that year, the Japanese government approved an order for 141 (but that was soon cut to 130), to enter service by 1999; structural problems resulted in service entry being delayed until 2000. Because of issues with cost-efficiency, orders for the aircraft were curtailed to 98 in 2004.

On 31 October 2007, an F-2B crashed during takeoff and subsequently caught fire at Nagoya Airfield in central Japan. The jet was being taken up on a test flight by Mitsubishi employees, after major maintenance and before being delivered to the JSDF. Both test pilots survived the incident with only minor injuries.[5] It was eventually determined that improper wiring caused the crash.[6][7]

On 12 March 2011, 18 F-2s based at the Matsushima Airbase in Miyagi Prefecture were swamped by the tsunami caused by an 9.0 scale earthquake.[8] Of these 18, 12 were deemed beyond repair and will be scrapped. The remaining 6 F-2s will be repaired at the estimated cost of ¥80 billion yen.[9]

The last of 94 aircraft ordered under contract was delivered to the Defense Ministry on 27 September 2011.[10] During the roll-out ceremony of the last production F-2 fighter jet, Mitsubishi Heavy Industries confirmed that production of the F-2 would end and no more F-2 fighters will be produced by the manufacturer.[11]

General Electric (engine), Kawasaki, Honeywell, Raytheon, NEC, Hazeltine, and Kokusai Electric are among the other larger participants to varying degrees. Lockheed Martin supplies the aft fuselage, leading edge slats, stores management system, a large portion of wing boxes (as part of two-way technology transfer agreements),[12] and other components.[13] Kawasaki builds the midsection of the fuselage, as well as the doors to the main wheel and the engine,[4] while forward fuselage and wings are built by Mitsubishi.[4] Avionics are supplied by Lockheed Martin, and the digital fly-by-wire system has been jointly developed by Japan Aviation Electric and Honeywell (formerly Allied Signal).[4] Contractors for communication systems and IFF interrogators include Raytheon, NEC, Hazeltine, and Kokusai Electric.[4] Final assembly is done in Japan, by MHI at its Komaki-South facility in Nagoya.

The F-2 has three display screens, including a liquid crystal display from Yokogawa. 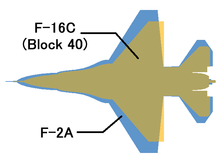 Also, the F-2 is equipped with a drogue parachute, like the version of the F-16 used by Netherlands, Norway, Greece, Turkey, Indonesia, Taiwan, and Venezuela.