The Duan Albanach (Song of the Scots) is a Middle Gaelic poem found with the Lebor Bretnach, a Gaelic version of the Historia Brittonum of Nennius, with extensive additional material (mostly concerning Scotland).

Written during the reign of Mael Coluim III, it is found in a variety of Irish sources, and the usual version comes from the early 15th century Books of Lecan and Ui Maine. It follows on from the Duan Eireannach, which covers the earlier mythological history of the Gael. 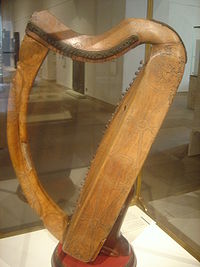 The harp (or clarsach) was an instrument associated with medieval Scottish culture. This one, now in the Museum of Scotland, is a one of only three surviving medieval Gaelic harps.

It is a praise poem of 27 stanzas, probably sung at court to a musical accompaniment by the harp. If performed in a public context, it is possible that the audience would have participated in the performance.

The Duan recounts the kings of the Scots since the eponymous Albanus came to Alba. The poem begins with the following stanzas.

In the final stanzas it is seen that the poem dates from the time of Malcolm III, in the second half of the 11th century.