The Major League Baseball Most Valuable Player Award (MVP) is an annual Major League Baseball (MLB) award, given to one outstanding player in the American League and one in the National League. Since 1931, it has been awarded by the Baseball Writers Association of America (BBWAA). The winners receive the Kenesaw Mountain Landis Memorial Baseball Award, which is named in honor of the first MLB commissioner, who served from 1920 to 1944.[1]

MVP voting takes place before the postseason, but the results are not announced until after the World Series. The BBWAA began by polling three writers in each league city in 1938, reducing that number to two per league city in 1961.[2] The BBWAA does not offer a clear-cut definition of what "most valuable" means, instead leaving the judgement to the individual voters.[3]

First basemen, with 34 winners, have won the most MVPs among infielders, followed by second basemen (16), third basemen (15), and shortstops (14). Of the 23 pitchers who have won the award, 14 are right-handed while 9 are left-handed. Walter Johnson, Carl Hubbell, and Hal Newhouser are the only pitchers who have won multiple times, Newhouser winning consecutively in 1944 and 1945.[4][5] No pitcher has been named MVP since Dennis Eckersley in 1992. Hank Greenberg, Stan Musial, Alex Rodriguez, and Robin Yount have won at different positions,[4] while Rodriguez is the only player who has won the award with two different teams at two different positions.[6] Barry Bonds has won the most often (seven times) and the most consecutively (2001–04).[7] Jimmie Foxx was the first player to win multiple times;[7] 9 players have won three times, and 19 have won twice.[8]

The award's only tie occurred in the National League in 1979, when Keith Hernandez and Willie Stargell received an equal number of points.[4][9] There have been 17 unanimous winners, who received all the first-place votes.[2] The New York Yankees have the most winning players with 22, followed by the St. Louis Cardinals with 17 winners. Five franchises have not had a winner. The most recent recipients are Josh Hamilton in the American League, and Joey Votto in the National League. 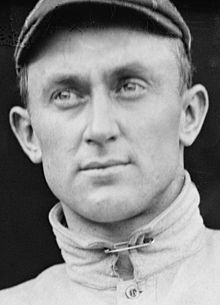 Ty Cobb won the first American League Chalmers Award in 1911 and was at the center of the controversy over the previous season's award.

Before the 1910 season, Hugh Chalmers of Chalmers Automobile announced he would present a Chalmers Model 30 automobile to the player with the highest batting average in Major League Baseball at the end of the season. The 1910 race for best average in the American League was between the Detroit Tigers' widely disliked[2][10][11] Ty Cobb and Nap Lajoie of the Cleveland Indians. On the last day of the season, Lajoie overtook Cobb's batting average with seven bunt hits against the St. Louis Browns. American League President Ban Johnson said a recalculation showed that Cobb had won the race anyway, and Chalmers ended up awarding cars to both players.[2]

The following season, Chalmers created the Chalmers Award. A committee of baseball writers were to convene after the season to determine the "most important and useful player to the club and to the league". Since the award was not as effective at advertising as Chalmers had hoped, it was discontinued after 1914.[2] 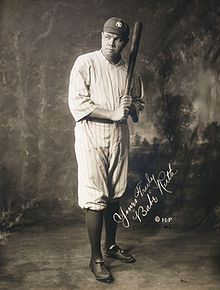 Babe Ruth was ineligible for the award in his famous 1927 season by the rules of the American League award because he had previously won in 1923.

In 1922 the American League created a new award to honor "the baseball player who is of the greatest all-around service to his club".[16] Winners, voted on by a committee of eight baseball writers chaired by James Crusinberry,[17] received a bronze medal and a cash prize.[18] Voters were required to select one player from each team and player-coaches and prior award winners were ineligible. These flaws resulted in the award's being dropped after 1928. The National League award, without these restrictions, lasted from 1924 to 1929.[2]

The BBWAA first awarded the modern MVP after the 1931 season, adopting the format the National League used to distribute its league award. One writer in each city with a team filled out a ten-place ballot, with ten points for the recipient of a first-place vote, nine for a second-place vote, and so on. In 1938, the BBWAA raised the number of voters to three per city and gave 14 points for a first-place vote. The only significant change since then occurred in 1961, when the number of voters was lowered to two per league city.[2] 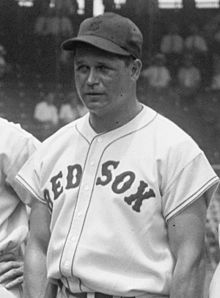 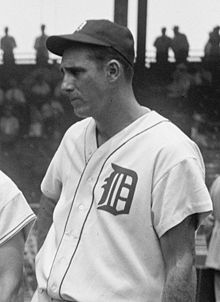 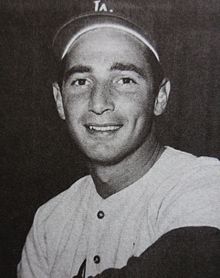 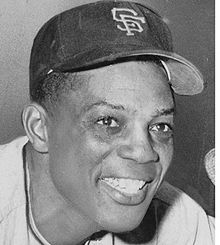 Willie Mays won the award in 1954 and 1965 with the same team in different cities. 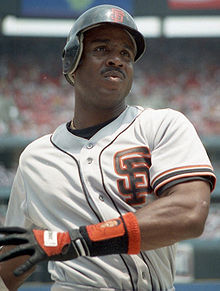 Barry Bonds' seven MVPs are the most for any individual player. 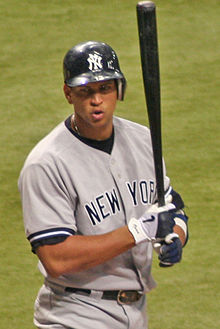 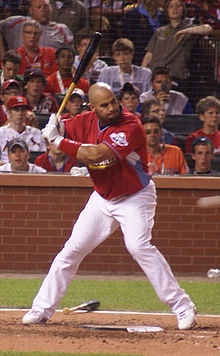 Albert Pujols won the award three times, all at first base with the St. Louis Cardinals. 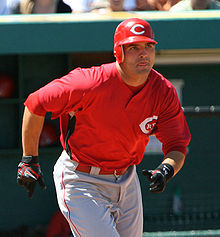