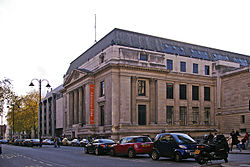 The building of the Geological Museum from 1935, designed by Sir Richard Allison and John Hatton Markham 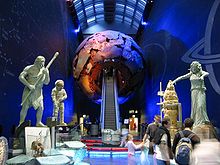 The atrium of the Geological Museum

The Geological Museum (originally The Museum of Practical Geology, started in 1835)[1] is one of the oldest single science museums in the world and now part of the Natural History Museum in London. It transferred from Jermyn Street to Exhibition Road, South Kensington in 1935 in a building designed by Sir Richard Allison and John Hatton Markham of the Office of Works.[2]

The Museum of Practical Geology was established in 1837 at a building in Craig's Court, Whitehall, at the suggestion of Henry De la Beche first Director General of the Geological Survey. Larger premises soon became necessary, and a design for a new building was commissioned from James Pennethorne. This, built on a long narrow site with frontages in Piccadilly and Jermyn Street, housed, as well as galleries, a library, lecture theatre, and offices and laboratories for the Survey. It was constructed between 1845 and 1849, and was finally opened, by Prince Albert, in May 1851.[3]

The library of the museum was founded by the first director, Sir Henry de la Bache in 1843, mainly in the form of donations from his own library.

In the summer of 1933 the Geological Museum, still at its old location, was the focus of worldwide attention when it served as the venue of the London Economic Conference, bringing together the representatives of 66 nations in a failed effort to end the then-prevalent global depression.

When the museum was reopened in 1935 following the move to Exhibition Road, it became well known for the many dioramas (three-dimensional paintings) used to interpret geology and one or two mining techniques. These have largely been dismantled since the Natural History Museum took over the Museum in 1986.

In 1965, the museum had been merged with the British Geological Survey and Overseas Geological Surveys, under the name "Institute of Geological Sciences". In 1971 the Museum employed the late designer James Gardiner to design and produce The Story of the Earth, which was acknowledged as a significant breakthrough in science museum design and critically acclaimed and imitated worldwide. It was opened by Queen Elizabeth II and became well known for the huge reproduction of a rock face, cast from site in Scotland, and for its planetarium, active volcano model and earthquake machine.

Between 1971 and 1974 the museum formed its own design team which, working closely with the scientists and technicians, produced a series of temporary and permanent exhibitions starting with the re-presentation of the gem collection and then, with a design team led by Giles Velarde (Head of Exhibition Design from 1974–1988), produced Early Days of Geology in Britain, Black Gold, Britain Before Man, Journey to the Planets, British Fossils, Pebbles, Treasures of the Earth and finally British Offshore Oil and Gas, which opened in 1988.

Treasures of the Earth was the first major museum gallery in the world to integrate computers presenting images and text adjacent to artefacts as part of the information process within the exhibition. The central feature film, Liquid Assets, in the Oil and Gas exhibition was shot and viewed vertically from a circular gallery and won a major award from the IVCA in 1989.

"The Power Within" exhibition on seismology includes a reconstruction of the 1995 Kobe Earthquake.

Transfer to the Natural History Museum

Surveys had shown that relatively few visitors navigated the Geological Museum's monumental staircase to the top floors. A major re-ordering of the galleries means that visitors are now encouraged to start their visit at the top of the building by ascending an escalator as part of the visit itinerary.

The former Central Hall of the museum -renamed as Visions of Earth - was transformed in 1996 to a design by Neal Potter. This included the installation of a large escalator (rising eleven metres at a 30° slope) that ascends continuously over two storeys and passes through a model globe. The previously open-sided balconies of the atrium space are now solid walls lined with slabs of recycled slate. These are sand-blasted to show the major stars in the night sky and the planets in the solar system. When first opened, the globe rotated around the escalator, with dramatic sound effects based on Jimi Hendrix's "Third Stone from the Sun", attempting to give an impression of the flux in the core of the Earth.

The Museums Association's journal Museum Practice reported in 2007 that “the contrast between galleries just before and just after Potter’s arrival (at the Natural History Museum) is like switching over from a television programme made for schools to a big-screen epic, choreographed by Busby Berkeley.”

The museum hires out the hall as a venue for occasional events including dinners and receptions for up to 500 guests.[4]