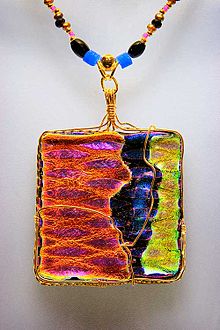 A pendant made from dichroic glass

Dichroic glass is glass containing multiple micro-layers of metals or oxides which give the glass dichroic optical properties. The main characteristic of dichroic glass is that it has a particular transmitted color and a completely different reflected color, as certain wavelengths of light either pass through or are reflected. This causes an array of color to be displayed. The colors shift depending on the angle of view. Dichroic glass is an example of thin-film optics.

Modern dichroic glass is available as a result of materials research carried out by NASA and its contractors[1], who developed it for use in dichroic filters. However, dichroic glass dates back to at least the 4th century AD, as seen in the Lycurgus cup.[2]

Multiple ultra-thin layers of different metals (such as gold or silver); oxides of such metals as titanium, chromium, aluminium, zirconium, or magnesium; or silica are vaporised by an electron beam in a vacuum chamber. The vapor then condenses on the surface of the glass in the form of a crystal structure. A protective layer of quartz crystal is sometimes added.[3] Other variants of such physical vapor deposition (PVD) coatings are also possible. The finished glass can have as many as 30[3] to 50 layers of these materials, yet the thickness of the total coating is approximately 30[3] to 35 millionths of an inch (about 760 to 890 nm). The coating that is created is very similar to a gemstone and, by careful control of thickness, different colors may be obtained.

A plate of dichroic glass can be fused with other glass in multiple firings. Due to variations in the firing process, individual results can never be exactly predicted, so each piece of fused dichroic glass is unique.[4][5] Over 45 colours of dichroic coatings are available to be placed on any glass substrate.[3]

Images can be formed by removing the dichroic coating from parts of the glass, creating everything from abstract patterns to letters, animals, or faces. The standard method for precision removal of the coating involves a laser.

Dichroic glass is specifically designed to be hotworked but can also be used in its raw form. Sculpted glass elements that have been shaped by extreme heat and then fused together may also be coated with dichroic afterwards to make them reflect an array of colors.