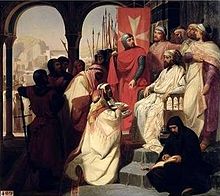 Constantin III of Armenia on his throne with the Hospitallers. "Les chevaliers de Saint-Jean-de-Jerusalem rétablissant la religion en Arménie" ("The knights of Saint-John of Jerusalem reestablish the religion in Armenia"), 1844 painting by Henri Delaborde.

Constantine III (also Constantine V; Armenian: Կոստանդին, Western Armenian transliteration: Gosdantin or Kostantine; April 17, 1313 – December 21, 1362) was the King of Armenian Cilicia from 1344 to 1362. He was the son of Baldwin, Lord of Neghir, a nephew of Hethum I of Armenia, and a distant cousin of Constantine II.

When Constantine II was killed in an uprising in 1344, Constantine III succeeded him. He attempted to wipe out all rival claimants to the throne; he gave orders to kill Constantine II's nephews, Bemon and Leo, but before the murder could be carried out they escaped to Cyprus.

Constantine was the first husband of Maria, daughter of Oshin of Corycos and Jeanne of Anjou. He was predeceased by his two sons. Upon his death from natural causes he was succeeded by his cousin Constantine IV.