The barony and viscountcy of Cobham were subsidiary titles of the earldom of Temple from 1750 to 1784, of the Marquessate of Buckingham from 1784 to 1822 and of the Dukedom of Buckingham and Chandos from 1822 to 1889. Since the latter year the titles are merged with the barony of Lyttelton and barony of Westcote.

The Temple family descended from Peter Temple of Burton Dassett. His younger son Anthony Temple founded the Irish branch of the family from whom the Viscounts Palmerston descended.[1] Peter Temple's eldest son, John Temple, acquired the Stowe estate in Buckinghamshire. The latter's son Thomas Temple represented Andover in Parliament. In 1611 he was created a Baronet, of Stowe in the County of Buckingham, in the Baronetage of England. His son, the second Baronet, represented Buckingham in both the Short Parliament and the Long Parliament. He was succeeded by his son, the third Baronet. He sat in Parliament for Warwickshire and Buckingham.

His son, the fourth Baronet (pictured), was a noted soldier and politician. In 1714 he was raised to the Peerage of Great Britain as Baron Cobham, of Cobham in the County of Kent, with remainder to heirs male of his body. Four years later he was created Baron Cobham, of Cobham in the County of Kent, and Viscount Cobham, with remainder, failing heirs male of his own, to (1) his sister Hester Temple and the heirs male of her body and failing which to (2) his third sister Lady Christian, wife of Sir Thomas Lyttelton, 4th Baronet, of Frankley (see the Baron Lyttelton). Lord Cobham died childless and was succeeded in the baronetcy by his cousin, the fifth Baronet, the great-grandson of Sir John Temple, second son of the first Baronet. The baronetcy became dormant in 1786 on the death of the seventh Baronet. Furthermore, on Lord Cobham's death the barony of 1714 became extinct while he was succeeded in the barony and viscountcy of 1718 according to the special remainder by his sister Hester Temple. She was the widow of Richard Grenville. In 1751 she was created Countess Temple in the Peerage of Great Britain, with remainder to the heirs male of her body. Lady Temple's younger son was Prime Minister George Grenville.

She was succeeded by her eldest son, the second Earl. He inherited the Temple estates, including Stowe House, and assumed the additional surname of Temple. Lord Temple was also involved in politics and held office as First Lord of the Admiralty and as Lord Privy Seal. On his death the titles passed to his nephew, the third Earl, the son of George Grenville. He served as Lord Lieutenant of Ireland between 1782 and 1783 and 1787 and 1789. In 1784 he was created Marquess of Buckingham in the Peerage of Great Britain. Lord Buckingham married Lady Mary Nugent, daughter of Robert Nugent, 1st Earl Nugent. Mary was in 1800 created Baroness Nugent in her own right in the Peerage of Ireland, with remainder to her second son George (see the Baron Nugent). In 1788 Lord Buckingham also succeeded his father-in-law as second Earl Nugent according to a special remainder in the letters patent. He assumed by Royal license the additional surname of Nugent at the same time. 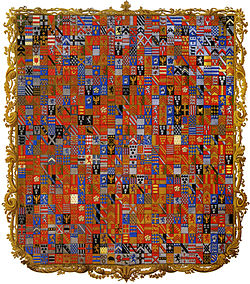 The 719 heraldic quarterings of the Temple-Nugent-Brydges-Chandos-Grenville family.

He was succeeded by his son, the second Marquess. He was also involved in politics and served as Joint Paymaster of the Forces from 1806 to 1807. He married Lady Anne Eliza Brydges, the only child of James Brydges, 3rd Duke of Chandos (a title which became extinct on his death in 1789), and assumed by Royal license the additional surnames of Brydges-Chandos in 1799. In 1822 Lord Buckingham was created Earl Temple of Stowe, in the County of Buckingham, Marquess of Chandos and Duke of Buckingham and Chandos, all in the Peerage of the United Kingdom. The earldom was created with remainder, failing male issue of his own, to (1) the heirs male of the body of his deceased great-grandmother Hester Grenville, 1st Countess Temple, and (2) in default thereof to his granddaughter Lady Anne Eliza Mary Temple-Nugent-Brydges-Chandos-Grenville, daughter of his son Richard, Earl Temple, who succeeded as second Duke. He was a Tory politician and served as Lord Privy Seal from 1841 to 1842.

On his death the titles passed to his son, the third Duke. He was also a prominent politician and served as Lord President of the Council and as Secretary of State for the Colonies. In 1868 the Duke established his right to the Scottish lordship of Kinloss before the Committee for Privileges of the House of Lords. However, on his death in 1889 without male issue, the dukedom and its subsidiary titles the marquessate of Buckingham, marquessate of Chandos, earldom of Temple and earldom of Nugent became extinct. The earldom of Temple of Stowe and lordship of Kinloss also held by the Duke were passed on to his nephew and daughter respectively (see these titles for more information).

The barony and viscountcy of Cobham also survived, and were inherited according to the special remainders by the Duke's distant relative Charles Lyttelton, 5th Baron Lyttelton, who became the eighth Viscount Cobham. He was the great-great-grandson of the aforementioned Lady Christian and Sir Thomas Lyttelton, 4th Baronet, of Frankley (see the Baron Lyttelton for earlier history of the Lyttelton family). The eighth Viscount had previously represented East Worcestershire in Parliament as a Liberal. His son, the ninth Viscount, was Lord Lieutenant of Worcestershire from 1923 to 1949. He was succeeded by his son, the tenth Viscount. He notably served as Governor-General of New Zealand from 1957 to 1962. As of 2010[update] the titles are held by his younger son, the twelfth Viscount, who succeeded his elder brother in 2006.

The family seat is Hagley Hall, near Stourbridge in Worcestershire.

Dukes of Buckingham and Chandos (1822)

The heir apparent is the present holder's son Hon. Oliver Christopher Lyttelton (b. 1976)