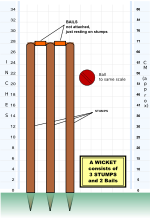 A wicket consists of three stumps that are inserted into the ground, and topped with two bails.

Stump is a term used in the sport of cricket where it has three different meanings:

Part of the wicket

The stumps are three vertical posts which support two bails. The stumps and bails are usually made of wood, and together form a wicket at each end of the pitch. The overall width of each wicket is 9 inches (22.9 cm).

Each stump is 28 inches (71.1 cm) tall with maximum and minimum diameters of 1½ inches (3.81 cm) and 1⅜ inches (3.49 cm). They have a spike at one end for inserting into the ground, and the other end has a U-shaped 'through groove' to provide a resting place for the bails.

Each stump is referred to by a specific name:

These names are relative to the batsman, so a right-handed batsman's leg stump becomes the off stump when a left-handed player is batting.

In modern professional play, the stumps are often emblazoned with a sponsor's logo. Although they are too far away from spectators to be seen, such logos are visible on television coverage.

For professional matches, often one or more of the stumps is hollow and contains a small television camera. This is aligned vertically, but can view through a small window on the side of the stump via a mirror. The so-called stump-cam gives a unique view of play for action replays, particularly when a batsman is bowled.

Manner of dismissing a batsman 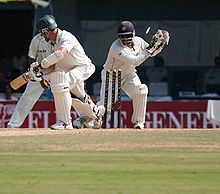 Mahendra Singh Dhoni of India attempts to stump a South African batsman during a match in Chennai in 2008. However, the batsman's foot was behind the line in this case.

In cricket, a batsman can be out stumped if:

Being "out of his ground" is defined as not having any part of the batsman's body or his bat touching the ground behind the crease - i.e., if his bat is slightly elevated from the floor despite being behind the crease, or if his foot is on the crease line itself but not completely across it and touching the ground behind it, then he would be considered out (if stumped). One of the fielding team (such as the wicket-keeper himself) must appeal for the wicket by asking the umpire. The appeal is normally directed to the square-leg umpire, who would be in the best position to adjudicate on the appeal.

Stumping is the fifth most common form of dismissal after caught, bowled, leg before wicket and run out, though it is seen more commonly in Twenty20 cricket because of its more-aggressive batting. It is governed by Law 39 of the Laws of cricket. It is usually seen when a medium or slow bowler is bowling, as with fast bowlers a wicket-keeper takes the ball too far back from the wicket to attempt a stumping. It requires co-operation between a bowler and wicket-keeper: the bowler must induce the batsman to move out of his ground, and the wicket-keeper must catch and break the wicket before the batsman realises he has missed the ball and makes his ground, i.e. places the bat or part of his body on the ground back behind the popping crease. If the bails are removed before the wicket-keeper has the ball, the batsman can still be stumped if the wicket-keeper removes one of the stumps from the ground, while holding the ball in his hand. The bowler is credited for the batsman's wicket, and the wicket-keeper is credited for the dismissal. A batsman may not be out stumped off a no ball, but may be stumped off a wide delivery.

End of the day's play