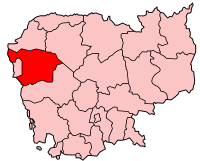 Battambang (also Batdambang) is a province of . It is in the northwest of the country, and its capital is . The name literally means loss of stick referring to a legend of Preah Bat Dambang Kranhoung (Kranhoung Stick King).

The stone inscriptions discovered from the pre-Angkor and Angkor eras have as yet mentioned no villages or districts at that time that were called ‘Battambang’ but according to the document ‘Mohachun Khmer’, ‘Srok Battambang’, literally meaning Battambang district, was used during the Angkor and post-Angkor eras.

During the pre-Angkor and eras, the areas to the north and to the north west of the were known as the territories of Amogha Boreak and Bhima Boreak. During the Angkor period, the territory of Amogha Boreak was significantly prosperous because the land was so fertile that rice crops, fruit and vegetables produced excellent yields. Many Khmer people settled there as indicated by the existence of so many ancient temples in the area. With the exception of the temples of Banan, ,, Stung, , , etc,other monuments, which were built by dignitaries and subjects at the time as places of worship to God and other deities of and , almost completely disappeared.

Between the 15th century and the 18th century the area was invaded by the army, forcing landowners off their land and splitting up their families.

From late in the 18th century until early in the 20th century, the Siamese overran Battambang and placed it under the rule of the Lord Chaofa Ben family, which was later known as the Akpheyyavong Family, for 6 generations ending in 1907.

In May 1953, the Poi Pet administration was founded and ordered under the district of Serei Sophorn which was divided into two districts: Serei Sophorn and Banteay Chmar. In March 1965, the administration of Poi Pet, was elevated to the status of a district named O Chrov. In July 1965, part of the territory of Maung Russey was separated to become the administration of Kors Kralor. In March 1966, another new district was founded and the district of was cut off from the province of Battambang for incorporation into province, another newly founded province. In the early years of the , two new districts were established: Banan and Kors Lor. During the 3 years and 9 months of the , Battambang saw its people evacuated by Pol Pot's men from the city and towns and relocated to remote and mountainous areas. The province of Battambang, once known as the rice bowl of the country, was turned into a site of torture, killings, and starvation.

The province of Battambang was completely liberated from the genocidal regime on January 13, 1979. At that time, the People’s Committee of commune-Sangkat was founded through the first-ever elections in 1983. Between 1979 and 1986, Battambang had 9 districts and one provincial town.

In 1986, three new districts were created: Banan, Bovel, and Ek Phnom. Until that point, Battambang had 12 districts and 1 provincial town. In 1988, however 5 districts were separated and incorporated into the newly founded province of .

In 1998, following the integration of the , the province of Battambang saw part of its territory separated for the municipality of Pailin, while 4 new districts were established: Samlot, Kamreang, Phnom Proeuk and Sampov Loun. In 2000, part of the district of was split off to become the district of Koas Krala. [ [http://www.battambang-town.gov.kh/city_info/display/cms/frame/index.cfm?region_id=27&id=57&lang_id=3 Welcome to Battambang District - áž&#x;á&#x;’ážšáž»áž€áž”áž¶áž?á&#x;‹ážŠá&#x;†áž”áž„â€‹áž&#x;áž¼áž˜áž&#x;á&#x;’ážœáž¶áž‚áž˜áž“á&#x;? ] ]

Known as the Rice Bowl of Cambodia the province has a strong economy with a great production of . In the 2006 rainy season 2,440.14 km² of rice, were cultivated for production and the average rice yielded 2.2 tons per hectare, with the total output standing at 536,830.80 tons. With the amount reserved for consumption, seeds, animal food, and waste during harvest, there were about 300,000 tons left for sale. The Department of Agriculture in Cambodia has provided quality rice seed varieties like the Romduol and Senpidor strains for farmers to grow on their rice fields as a demonstration and have allocated significant funds towards experimentation in many of the provinces districts.

In addition to rice, subsidiary crops were also planted on 98,342 hectares, including some 420 km² of , 400 km² of , 180 km² of , 2.42 sq km of and many other crops including and . There was a total of 501.78 km² of industrial crops with , , , produced. The Province also produces notable quantities of , , , and . Besides arable farming, local people mainly indulge in breeding, rice seed production, the production of animal , etc while few operate animal breeding farms. Strategies laid out by the Ministry of Agriculture, Forestry and Fishery, have intended to aid the transition from the tradition of growing long-term rice varieties to using medium- and short-term varieties and practicing nature-based intensive rice farming.

Battambang Province has 12 fishing lots and commercial fishing exceeded 7,000 tons in 2006 of which 990 tons of rice field fish were caught by local families. The province has 37 fishing communities, each with over 300 members.

During this monsoon season, snakeheads and snakehead murrels are a common target of fishing with a signigicant increase in stock in recent years due to the Ministry of Agriculture imposed restrictions on illegal fishing to ensure sustainability.

Battambang is home to the [http://ioof.org/sos_village.htm Independent Order of Odd Fellows / SOS Children's Village] , an orphanage and home to the . Samlaut Multiple Use Area is a which, along with other forests and preserves, was declared to be a protected area in 1993 by King . The multiple use area includes some of the country's richest farmland, but nearly 330 km² is covered by rain forest, home to a wide array of rare vegetation and wildlife.

Wat Banan located some 25 km south of Battambong City is like a smaller version of the rather more illustrious Angkong Wat. Built in the 10th century, it is very popular at weekends with Khmer families out on picnics.

Kamping Pouy is the site of both a recreationl lake and one of the Khmer Rouge's grander schemes, a massive hand-built dam stretching between two hills.

This is a small town near the border with Thailand , known for its , s and resources. [ [http://www.visitcambodia.org/index.php?module=battambang#Wat_Ek_Phnom Welcome to Cambodia - Visit Cambodia - Home ] ]