Ratzeburg was one of the dioceses formed ca. 1050 by Archbishop Adalbert of Hamburg, who appointed St. Aristo, who had just returned from Jerusalem, to the new see. Aristo seems to have been but a wandering missionary bishop. In 1066, the pagan Wends rose against their German masters, and on 15 July 1066, St. Ansverus, Abbot of St. George's, Ratzeburg (not the later monastery bearing that name), and several of his monks are said to have been stoned to death. It was not until 1154, however, that Henry the Lion, Duke of Saxony, and Hartwich I, Archbishop of Hamburg, refounded the episcopal see of Ratzeburg, and Evermodus became its first bishop. A disciple of St Norbert and provost of the Monastery of Our Lady at Magdeburg, Evermodus was, like many of his successors, a Premonstratensian canon. In 1157, a chapter was attached to Ratzeburg cathedral by Pope Adrian IV. 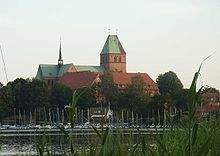 In 1236 Bishop Peter was invested by Frederick II, Holy Roman Emperor, with temporal jurisdiction over the land of Butin and a number of villages outside it (the Principality of Ratzeburg), making the see a prince-bishopric. The succeeding prince-bishops retained this jurisdiction in spite of the frequent attempts which the dukes of Saxe-Lauenburg made to deprive them of it.

The cathedral of Ratzeburg dates from the beginning of the 12th century. It was restored, and additions were made to it in the 15th century. The cathedral and pertaining premises such as the chapter and further episcopal manors formed the cathedral district immunity, an extraterritorial enclave of the Prince-Bishopric of Ratzeburg within the city of Ratzeburg, else belonging to Saxe-Lauenburg. The diocese also contained a number of other beautiful churches at Mölln, Wismar, Büchen and elsewhere.

Besides the cathedral chapter of Ratzeburg with its provost or dean and twelve canons, there were in the diocese the Benedictine Abbeys of St. George, Ratzeburg (refounded in 1093), and of Wismar, where Benedictines expelled from Lübeck founded a monastery in 1239; also convents of the same order at Eldena founded in 1229, by Bishop Gottschalk of Ratzeburg, and burnt in 1290, at Rehna founded in 1237 by Prince-Bishop Ludolfus, and at Zarrentin founded in 1243. There were also Franciscans (1251) and Dominicans (1293) at Wismar. 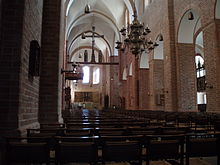 In 1504, during the episcopate of Prince-Bishop Johann V von Parkentin, the Premonstratensian regular canons of Ratzeburg cathedral were, with papal consent, made secular canons.

Prince-Bishop Georg von Blumenthal (1524–50), who feuded with Thomas Aderpul, was the last Roman Catholic bishop. In 1552, the cathedral was plundered by Count Volrad von Mansfeld. In 1554, the dean and chapter converted to Lutheranism. The cathedral is a proto-cathedral since and is owned by a Lutheran congregation within the North Elbian Evangelical Lutheran Church. Also most other churches in the former diocesan territory house Lutheran congregations today belonging to the North Elbian or the Evangelical Lutheran State Church of Mecklenburg.

By the beginning of the 20th century, the diocesan historical territory in the German Empire corresponded to the district of Duchy of Lauenburg (in Schleswig-Holstein), the bishop's own Principality of Ratzeburg in the Grand Duchy of Mecklenburg-Strelitz, and the western part of the Grand Duchy of Mecklenburg-Schwerin, including Wismar but not Schwerin. The whole of it was later included in the Diocese of Osnabrück and forms since January 7, 1995 part of the new Roman Catholic Archdiocese of Hamburg, with most of today's Catholic churches in the region built since the 19th c.