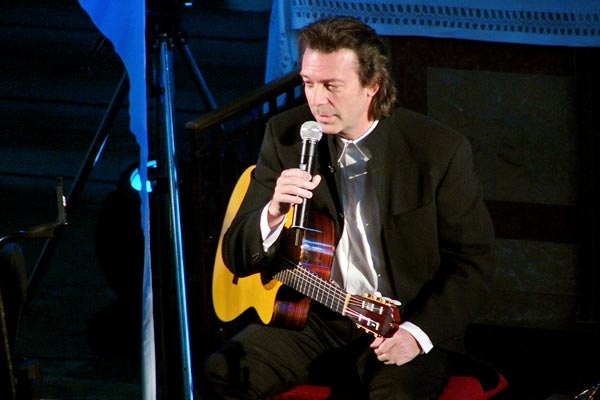 Stephen Richard Hackett (born 12 February 1950) is a British and . He gained prominence as a member of the British group Genesis, which he joined in 1970. Hackett remained with the band for eight albums before leaving in 1977 to pursue a solo career.

In 1986, Hackett co-founded the supergroup GTR with another progressive guitarist, Steve Howe of Yes and Asia. The group released a self-titled album that year, which peaked at #11 on the in the and spawned the Top 20 single "When the Heart Rules the Mind". When Hackett left GTR in 1987, the group disbanded.

After leaving GTR, Hackett resumed his solo career and has released albums and toured on a regular basis since. His body of work has encompassed many styles, such as progressive rock, , and classical. His playing has influenced guitarists such as

Hackett was born in , and attended the Sloane Grammar School, Chelsea.

He grew up having access to various musical instruments, such as the and mouth organ, but did not develop an interest in the guitar until the age of twelve, when he started playing single notes. By fourteen, he was learning s and experimenting with s, although he never received any formal instruction. Hackett's earliest musical influences were classical () and (). He has stated that his compositions are still influenced by them.

Steve Hackett's earliest professional playing experience came with two bands — Canterbury Glass and Sarabande — both of whom performed rock with progressive elements. His first recording work came in 1970, as a member of , a band that included younger brother John Hackett on . The group released one album, "The Road", but Hackett departed the group soon after.

Hackett, seeking a new band, placed an ad in "". The ad, in which Hackett stated he was seeking musicians "determined to strive beyond existing stagnant music forms," was spotted by Genesis vocalist , who contacted Hackett. The band had recently lost founding member , and was performing with a temporary guitarist, . After seeing Genesis perform, Hackett auditioned for the group and joined in December 1970.

Hackett, who had very little on-stage playing experience when he joined Genesis, had some initial difficulty performing with the group. According to , at Hackett's first gig with the group, Collins had decided to see how many bottles of Newcastle Brown Ale he could drink and still play the drums. ["Genesis - A History" documentary (1990)] But he soon settled into his role, and his unique stage image (wearing glasses and seated in a hunched position over his guitar) served as a counter to the costumed theatrics of Gabriel. ( also likes to sit on stage and has been seen wearing glasses, but he favors a high back-less stool.)

Hackett's first recording with Genesis was "", released in November 1971. Hackett made an immediate impact on the group's sound, as evidenced by his work on such songs as "" and "", becoming one of the first guitarists to experiment with the technique normally attributed to . (The continuo part in the song sounds like a due to distortion and due to his tapping technique as well as Tony Banks's simultaneous Hohner Pianet continuo).Although "Nursery Cryme" was not a commercial success, 1972's album "Foxtrot" was. (However, it only charted in the UK, reaching number 12) Included on "Foxtrot" was the brief classical acoustic solo "Horizons," which quickly became one of his signature pieces.

"Foxtrot" began a trend of increasing commercial popularity for Genesis. The group's 1973 effort, "", was particularly successful, reaching number 70 in the US the year after its release, and reaching number 3 in the UK (marking the bands' peak with Peter Gabriel there). Hackett showed continued and perfected use of the tapping technique as well as popularised in the 1980s by . Both these techniques can be heard on the solo to the opening track "". The third track on the album, "" contains one of Hackett's most celebrated, as well as one of progressive rock's most iconic, tearing guitar solos. The track has been a favourite at Genesis' live shows, even after Hackett's departure.

In 1975, Hackett became the first member of Genesis to release a solo album when he issued "". Assisting with the recording were Hackett's Genesis bandmates, Phil Collins and . Hackett enjoyed the freedom he had when writing and recording the album, and soon became disenchanted with the democratic approach to songwriting Genesis employed.

Since Hackett's departure, the early '70s lineup of Genesis has reunited on a handful of occasions. On 2 October 1982, the group gathered for a one-off performance entitled "Six of the Best". The show was held to raise money for Peter Gabriel's WOMAD festival. This was the first and last time this lineup had performed since 1975.

In 1998, the group gathered for a photo session and dinner to celebrate the release of the , "". Hackett also participated in the re-recording of 1974's "" for inclusion on the 1999 Genesis greatest hits album, "". The rest of the group recorded new parts as well, although they were not recorded together in the same studio.

In an April 2006 radio interview, Phil Collins discussed a band meeting that took place in November 2005. During that meeting, the group discussed the possibility of reuniting the classic mid-'70s roster for a limited run of shows, including a complete performance of the group's 1974 double album, "".

Hackett's first post-Genesis album was "", released in 1978. As with "Voyage of the Acolyte", much of the material on the album was in the style of progressive rock. It did contain, however, much more vocal work. Hackett, who had never sung lead on a Genesis song, turned over most of the vocals to a number of singers, including folk singer , R&B singer , and Steve Walsh of Kansas. He did provide lead vocals for "Carry on Up the Vicarage," but they were processed using a "laughing gnome" vocal effect.

A pair of progressive rock albums followed—1979's "" and 1980's "Defector". They were both Top 40 albums in the UK, while they charted #138 and #144 in the United States, respectively. Hackett toured Europe for the first time as a solo act in 1979, and in August performed at the Reading Festival. The "Defector" tour brought him to the United States for the first time since his last tour with Genesis.

Hackett's first major shift in musical style came with 1981's "Cured". Although the album contained some of the progressive and classical pieces for which Hackett was known, it also showcased a much more pop approach. The album was recorded without most of the musicians who had been on Hackett's solo albums since "Spectral Mornings" (Hackett handled all lead vocal duties). Only longtime collaborators Nick Magnus and John Hackett remained. While "Cured" did not chart highly in the U.S., it peaked at #15 in the UK, Hackett's highest charting yet.

In the 1980s, Hackett released his first classical guitar albums "" and "Momentum", which further enhanced his reputation. The tour for "Momentum" drew large crowds in Europe, considered unusual for a classical guitarist.

On the rock production side, Hackett's work in the 1980s involve the LPs "Cured" (1981), "Highly Strung" (1982) and "Till We Have Faces "(1984). In "Highly Strung", more than a nuance of electronic sound appears, making the album unique and unrepeated in Hackett's production, and surely one of the most difficult to approach. "Till We Have Faces" merges Hackett style sounds with Brazilian percussion.

Hackett's solo career continued, releasing a plethora of both electric and acoustic based albums throughout the 90s to the present day. One of his most memorable recordings was the neo-classical influenced "A Midsummer Night's Dream", which showcases his guitar skills, accompanied by the . Steve's younger brother John was involved as flute player and second guitarist in his 1970s bands, and has often appeared as musician and collaborator on his more recent work, particularly on "Sketches of Satie" (2000), arranged for flute and guitar.

Hackett is married to ian painter and artist , who paints most of his album covers. Her for "Voyage of the Acolyte" won [http://www.kimpoor.com/cover76.html Album Cover of the Year 1976] .