A game clock consists of two adjacent clocks and buttons to stop one clock while starting the other, such that the two component clocks never run simultaneously. Game clocks are used in two-player games where the players move in turn. The purpose is to keep track of the total time each player takes for his or her own moves, and ensure that neither player overly delays the game.

Game clocks were first used extensively in tournament chess, and are often called chess clocks. In a tournament, the arbiter typically places all clocks in the same orientation, so he can easily assess games that need attention at later stages. Their use has since spread to tournament Scrabble, Shogi, Go, and nearly every competitive two-player board game, as well as other types of games. The first time that game clocks were used in a chess tournament was in the London 1883 tournament.[1]

The simplest time control is "sudden death", in which players must make a predetermined number of moves in a certain amount of time or forfeit immediately. A particularly popular variant in informal play is blitz chess, in which each player is given five minutes on the clock for the entire game.

The players may take more or less time over any individual move. The opening moves in chess are often played quickly due to their familiarity, which leaves the players more time to consider more complex and unfamiliar positions later. It is not rare in slow chess games for a player to leave the table, but the clock of the absent player continues to run if it is his turn, or starts to run if his opponent makes a move. 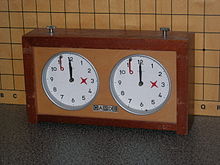 Analog clocks (as pictured to the right) are equipped with a "flag" (a Dutch invention) that falls to indicate the exact moment the player's time has expired. Analog clocks use mechanical buttons. Pressing the button on your side physically stops the movement of your clock and releases the hold on your opponent's. The drawbacks of the mechanical clocks include accuracy and matching of the two clocks, and matching of the indicators (flags) of time expiration. Unfortunately, additional time can't easily be added for more complex time controls, especially those that call for an increment or delay on every move, such as some forms of byoyomi. Therefore more versatile digital clocks are becoming increasingly popular. Even so, some people consider analog clocks to be nicer than the digital clocks, and a malfunctioning analog clock is a less serious event than a malfunctioning digital clock.[2] 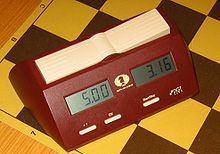 In 1973, to address the issues with analog clocks, Bruce Cheney, a Cornell University Electrical Engineering student and chess player, created the first digital chess clock as a project for an undergraduate EE course.[3] Typical of most inventions, it was crude compared to the products on the market 30 years later and was limited by the technology that existed at the time. For example, the display was done with red LEDs. LEDs require significant power, and as a result, the clock had to be plugged in to a wall outlet. The high cost of LEDs at the time meant that only one set of digits could be displayed, that of the player whose turn it was to move. This meant that each player's time had to be multiplexed to the display when their time was running. In 1973, LSI chips were not readily or cheaply available, so all the multiplexing and logic were done using chips that consisted of four two-input TTL NAND gates, which resulted in excessive power consumption. Being plugged into the wall is obviously a major drawback, but had one advantage: the timebase for the clock was driven off of a rectified version of 60 cycle AC current. Each player had a separate counter, and, in a parallel to the original mechanical architecture, one player's counter was disabled while the other's was running. The clock only had one mode: time ran forward. It could be reset, but not set. It did not count the number of moves. But it successfully addressed the original goals of the project (accurate and matched timing). 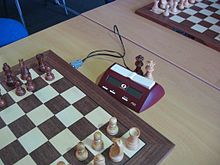 Digital chess clock connected to a board that automatically senses when moves have been made.

Digital clocks and Internet gaming have spurred a wave of experimentation with more varied and complex time controls than the traditional standards. Time control is commonly used in modern chess in many different methodologies. One particularly notable development, which has gained quite wide acceptance in chess, was proposed by former world champion Bobby Fischer, who in 1988 filed for U.S. Patent 4,884,255 (awarded in 1989) for a new type of digital chess clock. Fischer's digital clock gave each player a fixed period of time at the start of the game and then added a small amount after each move. In this way, the players would never be desperately short of time, but games could also be completed more quickly, doing away with the need for adjournments (in which a game is left incomplete to be finished at a later date). Although it was slow to catch on, as of 2004 a very large number of top class tournaments use Fischer's system, though usually in combination with the more traditional clocks (at lower levels, more traditional clocks are still employed as they are cheaper). Other aspects of Fischer's patent, such as a synthesized voice announcing how much time the players have, thus eliminating the need for them to keep looking at the clock, have not been adopted.

There are five main types of Time Controls: (1) Fischer (invented by Bobby Fischer), (2) Bronstein (invented by David Bronstein), (3) Simple Delay, (4) Game Word and (5) Hour Glass. The first three time controls implement some sort of delay clock, a small amount of time that is added for each move. The reason is that with a sudden-death time limit, all moves must be completed in the specified time, or the player loses. With a small delay added at each move, the player always has at least that much time to make a move. The two types of delay clocks differ in how the delay is implemented. The last two time controls are somewhat different, as they do not rely on time delay, as explained below.