Chess pieces or chessmen are the pieces deployed on a chessboard to play the game of chess. The pieces vary in abilities, giving them different values in the game. For a standard chess game both players start with:

Any pawn that reaches the eighth row during the game must be promoted to become any other piece of the same color except a king.

One side is referred to as "White" and the other as "Black" (see White and Black in chess). To distinguish between the two, the black pieces are darker than the white pieces, although pieces are not necessarily pure black or white. The Staunton chess set is the standard style for tournament or casual play. Besides these standard pieces, there exist many chess variants or certain kinds of chess problems that call for non-standard fairy pieces.

In chess, the word piece has three meanings, depending on the context.

Movement of the pieces

Starting position (squares are designated according to algebraic notation) 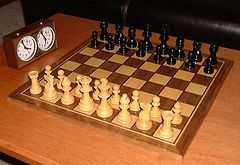 Staunton chess pieces on chess board with chess clock.

Each piece moves in a different way.

Pieces capture opposing pieces by replacing them on their square, except for an en passant capture. Pieces other than the pawn capture in the same way they move. A captured piece is removed from the board. Only one piece may occupy a given square. Except for castling and the movement of the knight, a piece may not move over another piece (Just & Burg 2003:13–16). 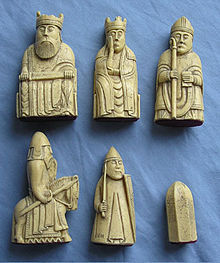 The variation of designs available is broad, from small cosmetic changes to highly abstract representations to themed designs such as those that emulate the drawings from the works of Lewis Carroll or modern treatments such as Star Trek or The Simpsons. Themed designs are usually intended for display rather than for actual play (Hooper & Whyld 1992:76). Some works of art are designs of chess sets, such as the modernist chess set by chess enthusiast and dadaist Man Ray, which is on display in the Museum of Modern Art in New York City.[1]

Chess pieces used for play are usually figurines that are taller than they are wide. For example, a set of pieces designed for a chessboard with 2¼ inch (57 mm) squares typically have a king around 3¾ inches (95 mm) tall. They are available in a variety of designs, with the most well-known Staunton design, which is named after Howard Staunton (a 19th century English chess player), and was designed by Nathaniel Cook. The first Staunton style sets were made in 1849 by Jaques of London (also known as John Jaques of London and Jaques and Son of London) (Just & Burg 2003:225).

Wooden chess pieces are normally made of the light wood boxwood or sometimes maple. Black wooden pieces are either made of a dark wood such as rosewood, ebony, red sandalwood, or walnut; or they are made of boxwood and stained or painted black, brown, or red. Plastic white pieces are made of white or off-white plastic and black pieces are made of black or red plastic. Sometimes other materials are used, such as bone, ivory, or a composite material (Just & Burg 2003:224,226).

For actual play, pieces of the Staunton chess set design are the standard. The height of the king should be between 85 mm and 105 mm (3.35 to 4.13 inches). USCF rules call for a king height between 3⅜ and 4½ inches tall (86 to 114 mm). A height of approximately 95 to 102 mm (3¾ to 4 inches) is preferred by most players. The diameter of the king should be 40 to 50 percent of its height. The size of the other pieces should be in proportion to the king. The pieces should be well balanced. The length of the sides of the squares of the chessboard should be approximately 1.25–1.3 times the diameter of the base of the king, or 50 to 65 mm (2 to 2½ inches). Squares of size of approximately 57 mm (2¼ inches) normally are well-suited for pieces with the kings in the preferred size range. These criteria are from the United States Chess Federation's Official Rules of Chess, which is based on the Fédération Internationale des Échecs rules (Just & Burg 2003:224–27).

Some small magnetic sets, designed to be compact and/or for travel, have pieces more like those used in Shogi and Xiangqi — each piece being a similar flat token, with a symbol drawn on it to show which piece it is.

On computers, chess pieces are often 2-D symbols on a 2-D board, although some programs have fancier 3-D graphics engines with more traditional designs of chess pieces.

Unicode contains symbols for chess pieces in both white and black.

"Make sure the one you buy is easy on the eye, felt-based, and heavy (weighted). The men should be constructed so they don't come apart. ... The regulation board used by the U. S. Chess Federation is green and buff — never red and black. However there are several good inlaid [wood] boards on the market. ... Avoid cheap equipment. Chess offers a lifetime of enjoyment for just a few dollars well spent at the outset."

The value assigned to a piece attempts to represent the strength this piece potentially has in a game. With game circumstances constantly changing, so do the values assigned to the pieces. A bishop positioned to control a long, open diagonal appears more valuable than a knight stuck in a corner. Similar ideas apply to placing rooks on open files and knights on active, central squares. The standard valuation is 1 point for a pawn, 3 points for a knight or bishop, 5 points for a rook, and 9 points for a queen (Hooper & Whyld 1992:438–39). These values are general, throughout a game; in specific circumstances the values may be quite different—a knight can be more valuable than a queen in a particular decisive attack.