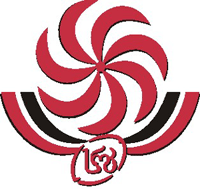 The Georgia national rugby union team represents the former Soviet Caucasian republic of Georgia in . The team's nickname, The Lelos, comes from "lelo", an indigenous Georgian sport with strong similarities to rugby. "Lelo" has been adopted as the Georgian word for "" (the highest-valued score in rugby). One standard cheer of Georgian rugby union fans is "Lelo, Lelo, Sakartvelo" (Try, Try, Georgia).

Georgia is currently considered a third tier rugby union nation, even if it's likely to be promoted to the second tier in a near future. The Lelos participate in the European Nations Cup, winning the tournament in and recently in 2007-08 season. Famously the Georgians, lacking the resources of the major nations, made scrum machines from old Soviet tractors.Fact|date=October 2008 The bulk of the national squad are based in France, in both the Top 14 and lower divisions. This is a practice that was popularized by former national team coach, , a Frenchman, who now coaches neighboring rivals Russia.

Rugby union is one of the most popular sports in Georgia. The Georgian national sevens team became the first national side from Georgia to compete in a major tournament, playing in the IRB Sevens World Cup in Argentina. However, the full national team would go onto qualify for the - playing against rugby powers such as South Africa and England. In 2006 the Lelos qualified for the in , they beat by 30-0 for their first ever world cup win.

There were unsuccessful attempts to introduce rugby union into Georgia in 1928 and also in 1940 and in 1948. It is thought that rugby was introduced to Georgia by Jacques Haspekian, a man (ethnic Armenian) from Marseille in France who taught the game to students in the late 1950s through to the mid 1960s.

Rugby's popularity in Georgia might be explained by its resemblance to the traditional Georgian game named “Lelo” or “Lelo Burti” (meaning “Field Ball”). This game was played in Georgia from ancient times and is still played on occasions in rural areas. A field ("Lelo") was selected between two river creeks which represented a playing ground. Two teams, usually consisting of the male population of neighboring villages, would face each other. The number of players from each side was not set, but included any able men each village could summon. A large, heavy ball was placed in the middle of the field and the goal of the game was to carry it over the river creek of the opposing side. The was founded in , but until the late 1980s it was part of the Soviet Union's rugby federation. The rugby union connection between France and Georgia started as links were established by the then powerful French Communist Party and many other left-wing organisations. Georgia initially did not have its own team and its best players would play for the USSR team.

In 1988 Georgia produced their first national sevens side. In September 1989, Georgia got together with other FIRA countries to host a tour by . Zimbabwe's first match on the tour was in the wet against Georgia in , west of Tbilisi, which Georgia won 16&ndash;3. The next year Georgia went to where they played two tests, losing the first in Bulawayo and winning the second 26&ndash;10 in Harare.

On , Georgia declared independence from the Soviet Union. Georgia was now a rugby union nation but getting matches was not easy, the old Soviet team continued under the name Commonwealth of Independent States. Georgia were limited to the odd game against until they gained membership of the in 1992.

French coach, , first arrived in Georgia in 1997 with a brief to assess the standard of sport; he and his development team have helped boost the profile of the sport to the extent that it is now considered the country's most popular team sport, even ahead of football. Saurel went on to work with the team, until he was appointed as the national coach in the summer of 1999.

Georgia's 1998 loss to Romania saw them play a two legged repechage play-off against Tonga to qualify for the 1999 World Cup. On that occasion Georgia lost the first leg 37&ndash;6 in NukuOkinaalofa before a 28&ndash;27 win in Tbilisi. This was not enough and Georgia failed to qualify.

During the European Nations Cup tournament of 2000, Georgia finished second in the competition, finishing behind Romania. The following year, Georgia improved upon this, winning all five of their matches during the 2000/1 tournament, and thus finishing at the top of the table. They clinched the title by beating Romania away 31&ndash;20 on the final day.

Georgian first made an impact at by finishing a respectable 10th in the 2001 edition of the Sevens World Cup in Argentina. Rugby union took off in the country, the travel and opportunities to land lucrative contracts in made rugby union a glamorous pursuit in Georgia. Georgia placed second in the 2001-2002 tournament. When Georgia played Russia in the European Nations Cup 65,000 people crammed into the national stadium in .

The two nations would contest another match at the same venue in October 2002, in what was at the time one of the most important clashes ever between the two national sides. The victorious nation would head to the , and the loser would be relegated to fight it out for a repechage position. Neither nation had ever been to a World Cup, though Georgia had come close in 1999. 45,000 turned out to the national stadium, with another one and a half million Georgians watching it on national television. Both nations kicked penalty goals in the first half, but Russia moved ahead with a 13&ndash;9 lead through a Konstantin Rachkov try, but Georgia were able to score a try of their own just before half time, with Levan Tsabadze putting them in front 14&ndash;13 at the break. Georgia held on, winning 17&ndash;13, a victory which sparked celebrations throughout the capital.

They were grouped into pool C alongside giants - South Africa and England. They suffered their heaviest ever defeat when beaten by England 84&ndash;6 in their opening game. In their second match, Samoa comfortably eased to a 9&ndash;46 victory. Although they performed well against the Springboks (losing 46&ndash;19) they were disappointingly defeated by Uruguay 24&ndash;12, in a match that they were expected to win.

Three of the 75 French-based Georgian players were denied permission to play in the tournament and were suspended. Another five were sacked and arrived in Australia as free agents. In a warm-up game held in the Georgians held the Italians to 31&ndash;22. They lost all four of their matches but impressed against South Africa. Despite the sad financial state of their union, qualification has seen the sport's profile rise throughout Georgia.

The Barbarians beat Georgia 28&ndash;19 in Tbilisi on the in front of some 10,000 spectators. The Barbarians led 14&ndash;7 at half-time and the Lelos pulled back to 14-all early in the second half, but the Barbarians added two more tries before the Lelos got their third just before the end. Paliko Jimsheladze, playing as a fullback, became the first Georgian to win 50 caps. In recognition of this feat he was presented with a commemorative cap by Nodar Qipiani, the first captain of a Georgian national team. After the match the Barbarians presented £10,000 for the development of rugby union in Georgia.

In the , Georgia performed strongly, holding Argentina 6-3 at half time, and in the next match did even better, losing to Ireland 14-10, which included a disallowed try, three missed drop goals, and spent the last 5 minutes just metres from the Irish line, allowing Ireland to scrape through. Georgia secured its first World Cup win with a convincing 30-0 victory over Namibia. Georgia's final try in the match came in injury time with an interception by Davit Kacharava.

Aftermath of the World Cup

Georgia cimented his place as the 7 th best European rugby union team, winning for the second time the European Nations Cup for the 2007-2008 edition, with nine wins and a single loss. Even that way, they weren't granted the chance to compete at the , not even in a repechage system with their last classificate, Italy. Despite this, Georgia seems likely to be the next European team to be promoted to the second tier of world rugby union.

Georgia compete annually in the European Nations Cup. They won the tournament twice in and recently in 2007-08 season.