The Cumbria Way is a linear long distance footpath in Cumbria, England passing through the towns of Coniston and Keswick. It also passes through the Langdale and Borrowdale valleys. The majority of the route is inside the boundaries of the Lake District National Park.

This 112 km route through the heart of the Lake District National Park links the two historic Cumbrian towns of Ulverston and Carlisle. The route cuts through classic Lakeland country via Coniston, Langdale, Borrowdale, Derwent Water, Skiddaw Forest and Caldbeck. It is a primarily low-level long distance footpath but does contain some high-level exposed sections.[2]

The Cumbria Way was originally devised in the 1970s by local Ramblers' Association members. The waymarking of the entire route was completed by volunteers and national park staff in May 2007. [3]

The route can be walked in either direction but is described here as south to north beginning at the trailhead of Ulverston (grid reference SD284785) and ending in Carlisle (grid reference NY400554). 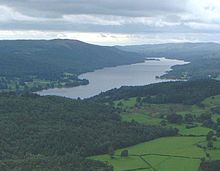 Coniston Water seen from the North

The route leaves the urban area of Ulverston, birthplace of Stan Laurel,[4] and heads north towards the village of Gawthwaite and the boundary of the Lake District National Park. The route, which consists primarily of field paths at this stage, then progresses towards the settlement of Sunny Bank and the shore of Coniston Water. The western shoreline of Coniston Water is followed before reaching the settlement of Coniston. [5] Grizedale Forest is visible to the east of the lake with Coniston Old Man and Dow Crag being visible to the west on approach to Coniston. This stage is approximately 24 km in length. 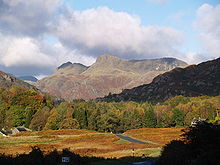 The route leaves Coniston heading in a NNW direction through woodland towards Tarn Hows. The route involves some road walking as it passes through the villages of Colwith and Skelwith Bridge. The Langdale Pikes soon become visible as the route leaves Skelwith Bridge in a NNE direction, passing Elter Water before entering the Great Langdale valley.[6] This stage is approximately 17.5 km in length. 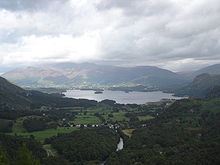 The route leaves Langdale and travels alongside Mickleden beck. The mountain of Bow Fell passed to the west with the Langdale Pikes to the east. After a significant gain in elevation the route crosses Stake pass before descending via Langstrath beck and turning towards the villages of Stonethwaite and Rosthwaite. The route subsequently follows the River Derwent before reaching Derwent Water where it follows the shoreline path to reach the town of Keswick. The mountains Skiddaw and Blencathra may be visible to the north.[7] This stage is approximately 24 km in length.

After some urban walking on the exit from Keswick, the route crosses the A591 road before ascending past Latrigg towards Skiddaw House (465m AMSL). After crossing the area of fells known as Back o'Skiddaw the route passes High Pike and the Caldbeck Fells before descending towards the village of Caldbeck.[8] This stage is approximately 22.5 km in length. 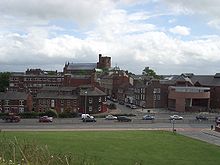 After leaving the village of Caldbeck this final low-level section of the route follows the course of the River Caldew to the largest Cumbrian town of Carlisle. The route passes through the villages of Sebergham, Buchaban and Dalston following primarily woodland and farmland public footpaths and bridleways.[9] This stage is approximately 24 km in length.

The tarns encountered on the route provide a habitat for a wide range of species including vendace, charr, crayfish and schelly.[10]

The red squirrel can be found in woodland encountered on the route.[11]

The Ancient woodland encountered throughout the route provide a favorable habitat, due to high precipitation, for mosses, liverworts, ferns and lichens. The boggy areas encountered, particularly during the high-level parts of the route, provide a habitat for carnivorous plants including sundew and butterwort.[12]

The following guidebooks detail the route: