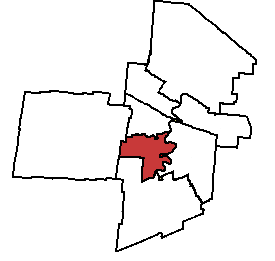 Winnipeg South Centre is a federal electoral district in , , that has been represented in the from 1925 to 1979 and since 1988.

The district includes the neighbourhoods of , , , Sir John Franklin, , , , , , Crescentwood, Earl Grey, Rockwood, Grant Park, Riverview, Lord Roberts, Beaumont, Wildwood, , Maybank, and the western half of the in the City of Winnipeg.

The electoral district was originally created in 1924 from and ridings. It generally consisted of the part of the city west of the Red River and north of the . In 1952, it gained parts the Rural Municipality (and later city) of St. James. In 1966, it gained parts the municipalities of Assiniboia, and Charleswood, and the Town of Tuxedo.

In 1976, it was abolished with part transferred to , , and ridings.

The electoral district was re-created in 1987 from Winnipeg North Centre, Winnipeg—Assiniboine and ridings.