Malcolm Welsford is a New Zealand Record Producer and is best known for his work with Shihad, The Feelers and Supergroove. 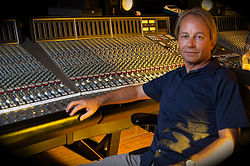 Welsford's professional recording career began in 1984 at a small largely unknown Studio called Frontier Studios, Wellington New Zealand. Frontier was located in the same building as Marmalade Audio and was best known for recording local Reggae bands on 1” 16 Track Tape. In 1986 he became a freelance engineer at Marmalade Studios until relocating to Auckland in 1989 where he mainly worked out of Mandrill Studios [1] and Phil Rudd’s Phil Rudd own personal Studio.

In 1992 he began construction of York Street Studios[1] with Killing Joke front man Jaz Coleman which opened to the public in 1993. In 1996 Welsford took over the old Radio New Zealand Studio [2] building on Shortland Street which became Studio Two and housed several other private studios including Tom Bailey's studio.

Between 1993 and 2005, Welsford contributed to the success of many international and local New Zealand artists such as ZED, Garageland, Pacifier, Shihad, Bike, The Feelers, Supergroove, The Headless Chickens, The D4, Indicator Dogs, Eight, PanAm, Eye TV, Neil and Tim Finn, Bic Runga and Killing Joke.

Welsford moved to the United States early 2005 to focus on Artist development.

Welsford developed and produced two albums with Adam Lambert who was the runner up for the 2009 American Idol series. He is the producer of Take One, Adam Lambert's current release with Coldwater Entertainment. Welsford also produced over a dozen un-released tracks which Adam Lambert penned with Guitarist Monte Pittman.